To start the game, shuffle the building cards.

Each player’s turn starts with them rolling the die. The current player then sets the timer equal to the number they rolled. Once the timer is started the current player flips over the top card from the building card stack. The player tries to build the structure shown on the card. If they successfully build the structure (verified by one of the other players) they take the next card from the stack. The player continues trying to build the designs shown on the cards until the timer runs out.

In addition to normal cards the game includes the following special cards: 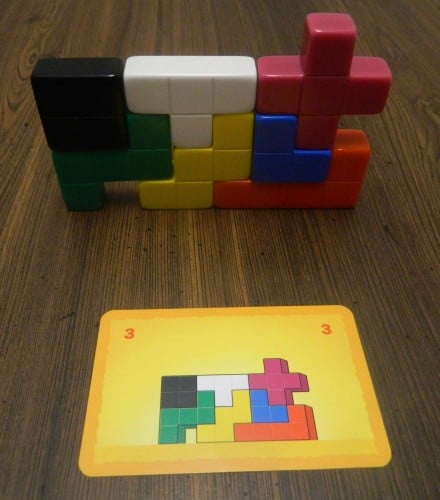 The current player has to build the design on the card in order to earn three points. Since they were successful they will get three points at the end of the round. If the timer hasn’t expired yet, the player can continue building more designs to earn more points.

When the timer expires the player adds up the points from all of the cards they completed during their turn (small number in the corners). The player gets tokens equal to the number of points earned. When everyone has had five turns, points are totaled and whoever has the most points ends up winning the game. If there is a tie, the tied players play an additional round and whoever scores the most points in the extra round wins the game.

Make ‘N’ Break utilizes both dexterity and spatial awareness. You need decent dexterity skills in order to successfully create the designs while preventing them from falling down. You need good spatial awareness skills in order to be able to analyze the card and recreate it. Most people should not have issues playing the game. If the players have equal experience with the game they should also be similarly skilled. If a person has bad spatial awareness skills though, they could struggle quite a bit with the game. If you aren’t able to look at the cards and quickly decipher how to construct them yourself, you will stand no chance at ever winning the game. Make ‘N’ Break may be very frustrating for these people.

What I like about Make ‘N’ Break is that is is easy to learn and quick to pick up. It is not the type of game that you will play for hours at a time but you can bring it out for 20 minutes, play a quick game, and then put it back for another day. Make ‘N’ Break could work great as a filler game. The game has pretty good replay value even if the same cards are reused every game since it is unlikely that people will remember the designs and even if they do it won’t help them out much.

Since Make ‘N’ Break Extreme is a spin off game of the original Make ‘N’ Break I thought it would make sense to compare the two games. Based on my experience, there seems to only be a few differences between Extreme and the original.

First the extreme version adds the timer and die. Even though my copy of the game didn’t include the timer, I don’t feel like I missed out on anything. This addition seems to just add unnecessary luck to the game which already had quite a bit of luck due to the cards. If you roll well you have a distinct advantage over the other players since you get more time to construct the designs. This addition eliminates a lot of the skill involved in the game. If you like luck in your games the timer would work just fine, but I think most people would agree with me that the timer doesn’t help the gameplay. I honestly think it would be better to have a normal timer where everyone gets the same amount of time each turn.

The second new addition is a change to the game pieces. In the original game all of the pieces were different colored rectangles. In Make ‘N’ Break extreme, the pieces are more unique shapes like you would find in a game of Tetris. Over at Board Game Geek some people like the new pieces while others don’t. I would consider myself to be somewhere in the middle. I like that the shapes are all different which makes Extreme a different experience from the original. I don’t like that they are made out of plastic instead of wood. I prefer wood pieces but the plastic is thick and durable. Being made of plastic though, the pieces tend to like to slide off one another.

The final thing Extreme adds to the game is some new special cards. For the most part I don’t really like these new cards. The ten card is too powerful since it a no lose card. Since you get additional time to complete the card, you don’t end up wasting any of your normal time. If you end up completing the card you get five points which could give you a pretty big lead over your competitors. If you don’t complete the card you don’t lose anything.

The four, five, and gray shape cards are way too easy to complete and give players too many points. There is really no strategy to these cards since you could pretty easily take four or five pieces and easily make a design that works especially since two of the blocks can touch the table. I find these cards to pretty much be free points.

Finally the four with an arrow card just messes up the game too much in my opinion. If the player to the player’s left is a shrewd player they would try to build the design as slow as possible while still completing it in time. Doing this they can still get the points while also wasting one of the other player’s time.

What I don’t like about these new cards is that they add to the luck factor that was already a factor with the cards in the original version of Make ‘N’ Break. What cards you draw can have a big impact on who wins the game. The cards aren’t really balanced. Some of the low point cards are way too easy. It is generally best to get the high point cards though since the additional time required to complete them are more than offset by the additional points that they are worth.

If you have played another version of Make ‘N’ Break and either didn’t like it or only thought it was average, Make ‘N’ Break is not worth purchasing. If you have never played the game before I would recommend trying to find the cheapest version of the game to give the game a shot. If you really liked one of the other versions of the game, your decision will come down to how much you want the new pieces. The new pieces give the game a different feel but they don’t drastically change the game. If you can find the game for cheap and liked the original or one of the other versions I think you should pick up Make ‘N’ Break Extreme.