Say When is a trivia game that is very similar to games like Chronology, Wits & Wagers, and Times to Remember (which I have already reviewed) where you don’t have to know the exact answers to trivia questions, you just need to be closer than the players you are competing against. While a game like Trivial Pursuit might ask you what year the tea bag was invented and expect you to know the exact answer (which maybe 1% of people know), you can get one or two points just for knowing it was in the early 1900’s in this game. All of the questions in Say When involve numbers (either an amount or year) and the player who comes closest scores between one and four points.

If the quizzer is in the lead, the guessing is “secret,” meaning that everybody writes down their answers and reveals them at the same time. If the quizzer is trailing at least one player, the guessing is “open” (this mechanic is meant to help trailing players catch up a bit). The player or team to the quizzer’s left writes down their guess first and places it face up for all to see. The next player or team can base their guess off of it (they can even pull a Price Is Right and just go one above or below). Guesses are made and revealed in the same way until you get back to the quizzer. The quizzer will have the benefit of seeing all of the guesses and can make a guess that will maximize the range they can win the round with. If the quizzer is tied for the lead, they get to pick whether the guessing is secret or open (most likely they will pick open since it gives them a pretty significant advantage). 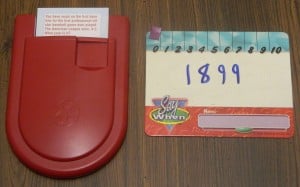 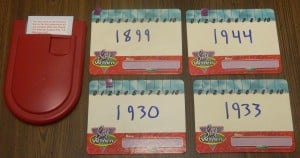 On the other hand, if the round is played with secret guessing all players write down and reveal their answers at the same time.

Regardless of whether the guessing is secret or open, once everyone has revealed their guesses, the quizzer opens up the answer door and reads aloud the actual answer and scoring range. For example, the correct answer for the tea bag question from earlier is 1904 (and the range is 1900-1910). The player or team closest to 1904 (you can guess over the amount or year, the game doesn’t use the Price Is Right rule of not going over) earns one point for being the closest. If their answer was in the scoring range (for example, they guessed 1908), they get an additional point (so two points total). If they guessed the actual year or amount, they get a whopping four points. Only the player or team that comes closest to the right answer can win points, even if someone’s guess is in the range but another player’s guess is closer despite not even being in the range. For example, in the tea bag question 1899 is not in the range but still closer than 1910 would be; in this case the player guessing 1899 would receive one point and the 1910 guesser gets nothing (this scoring quirk actually happened in the game I played). If two players or teams are tied for closest guess (either they guessed the exact same amount/year or one was five lower and the other five higher), they both score. The player or team that won the round moves their scoring slider the amount of points they earned and the quizzer removes the used card and passes the scanner to the next player or team. 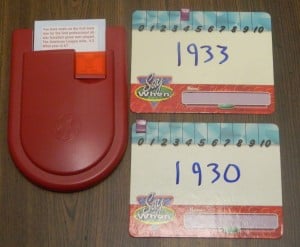 It’s hard to see but the question in this sample round is “You have seats on the first base line for the first professional all-star baseball game ever played. The American League wins, 4-2. What year is it?” The answer is 1933. In most situations the player guessing 1930 would win the round since they are very close. They would have won one point for being closest and another point for being in the range (which in this case is 1930-1936). However, since another player guessed the year right on the nose, the other player gets nothing. The correct player gets a whopping four points (one for being closest, another for being in the range, and two more for guessing the exact answer).

The game continues until either one player or team has scored ten or more points or all twenty trivia cards have been used (in which case the player or team with the most points wins). The 20th card awards double points to the winner of the round. If two or more players or teams are tied after all twenty cards have been used, they go to a sudden death round where only the players or teams involved in the tie guess. The winner of the sudden death round wins Say When.

As someone who likes trivia but is just average at it, I’ve always liked games like Chronology and Wits & Wagers where you don’t have to be 100% correct in order to score. Games like Trivial Pursuit tend to go on forever, become boring very quickly, and make me feel stupid. Games like Say When are actually fun and don’t make you feel like an idiot (since someone will be “correct” on every question). While I don’t think Say When is as good as Chronology or Wits & Wagers (my two favorite trivia games), it is very solid and comparable to a game like Times to Remember.

Unless you are a trivia master who knows almost anything off the top of your head (and thus like the insanely tough questions Trivial Pursuit asks), trivia games like Say When are just much better designed and funner than games like Trivial Pursuit. First of all, you aren’t sitting around waiting for your opponents to answer their questions before you get your turn. In Say When (and other similar games), everybody plays at the same time and at least one point is awarded each turn. This means that games are much quicker paced and don’t turn into snooze-fests like other trivia games tend to.

I like the scoring system in Say When quite a bit. I love the idea of giving a varying amount of points to the winner of the round based on how close they were. One point for being off by quite a bit is fair, two points for being very close is about right, and if you can guess the exact amount four points is a very reasonable reward (this happened twice in the game I played). The only problem I have is that it is pretty easy to get to ten points rather quickly. Luckily, this is a game where you could easily just ignore the rules and play all twenty cards (or even more if you wish) even if a player or team has already reached ten points. You will probably occasionally run into some scoring quirks (like how we once had a player get four points just because they went one above another player, which turned out to be the correct answer), but the scoring system is pretty good overall.

I thought I wouldn’t like the open guessing rule (and considered just ditching it for completely secret guessing), but I actually don’t mind it. It helps keep the games closer and even adds a bit of strategy to the game. If you are the quizzer, instead of just guessing what you think the answer is, you might want to consider getting the biggest range you can. If you dislike the open guessing rule, you could always just ignore it anyway.

Say When is kind of hit or miss with its components. While the game comes with a lot of questions (1000 total questions on 250 cards) and the scanner unit is well-made (the answer door does a good job of keeping the answer hidden), some of the other pieces are pretty low quality. Not surprisingly my dry eraser markers were dead and the answer boards don’t erase particularly well. Also, the game doesn’t offer much from a visual standpoint. The box, questions, and components are all pretty boring visually. I even noticed a few typos on some of the questions, most notably the misspelling of both Scottie Pippen’s first and last names (“Scotty Pippin”). While none of these things hurt my rating much, games that are well-designed and polished are obviously preferred.

One slight problem with Say When, which isn’t the game’s fault at all, is the game’s age. The game was released in 1998 which means it is already seventeen years old (at the time of this review’s publication). While most of the card’s answers probably haven’t changed significantly, there is the occasional answer that would be completely different if the game was from 2015 instead of 1998. However, despite being a little bit outdated at times, Say When holds up pretty well overall.

Say When has enough equipment to accompany two to four players or teams. Since teams can be as large as you’d like, this game could theoretically be played by an infinite amount of people at the same time (so everybody at a party could easily play at the same time). The game is very family-friendly, even though children are obviously at a disadvantage. I would probably suggest pairing children with at least one adult on a team since there are quite a few questions about celebrities and events they wouldn’t have even been alive for.

I would say the game’s value grades out pretty highly. The game can pretty easily be found for ten to fifteen dollars (or less) on Amazon and eBay (or for even less at thrift stores). For that relatively cheap price, you get 1000 total questions on 250 cards (so at least twelve games worth). Also, it’s pretty unlikely you will remember the answers so Say When is a game you could probably revisit a few years later and get even more games out of.

Say When is nothing special but still a very solid trivia game. While it isn’t as good as games like Chronology and Wits & Wagers, it’s still worth playing if you like trivia games (especially ones that don’t make you feel stupid) and can find it on the cheap.