Milton Bradley’s Times to Remember is basically a trivia game that focuses on your ability to remember what year major events in Hollywood, television, music, and news happened (all events happened between 1950 and 1990). If you have ever played Chronology, this game is very similar but actually made before it (1992 versus 1996 for Chronology). The object of the game is to discard all of your “time windows” before the opposing player or team does.

The two players or teams each get seven different time windows, which are plastic clips that you can clip to the board to indicate your answer, and a game board. The time windows range from one to seven years (each team gets one 1-year range clip, one 2-year range clip, etc. all the way up to a 7-year range clip) and your team must get rid of all of them to win.

The game is very simple to play, each round one player rolls the die and a player from the other team reads the corresponding question. The possible categories the question could come from include headlines, Hollywood, television, music, and this & that (random questions that don’t really fit into any of the other categories). Each team converses (table talk is allowed and pretty much necessary) and tries to come up with the right year (or at least narrow it down to the shortest range of years that they can), picks the right time clip, and clips it to the years they think the event happened. If a team is very confident about an answer, they can try to use up their one-year time window (you have to get rid of all seven eventually to win the game) or if they aren’t feeling too confident they can use their five, six, or even seven-year time window. 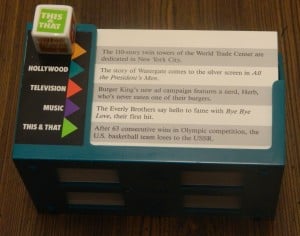 A couple sample questions you might be asked in Times to Remember. In this round, the team rolled “this & that” so the question will be “After 63 consecutive wins in Olympic competition, the U.S. basketball team loses to the USSR.” 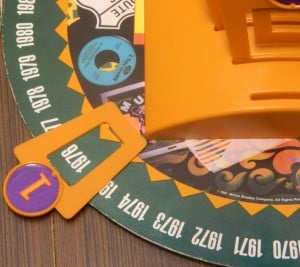 The orange team knows that the Summer Olympics only happen ever four years and have their answer narrowed down to 1972 or 1976. Since there is no reason not to use either a one or five-year time window (the answer can’t possibly be 1973, 1974, or 1975 because there weren’t any Olympics those years), they decide to gamble and try to get rid of their one-year time window on 1976. 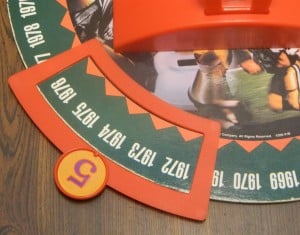 Once both teams have locked in their answers, they both reveal their choices and the correct answer is read. If the correct date falls within the time window chosen, that time window is discarded and can’t be used again. That team will now have one less time window to have to try to get rid of. Both teams can be correct in a single round and both get rid of their time window. If you are incorrect, you don’t get to discard it and it will be available for subsequent rounds. Obviously, as the game goes on you will most likely have to be more and more accurate with your answers since it is much easier to get rid of your seven-year time window than the one-year one. 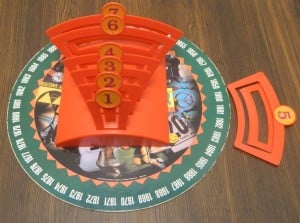 For an example, one of the questions in the game is “The Experimental Prototype Community of Tomorrow (EPCOT) Center opens at Walt Disney World.” As Disney fans, this is one of the few questions in the game that my team actually knows really well (I was six and my teammate three when this game was made) so we decide to use our two-year time window on the years 1981 and 1982. Our opposition isn’t so sure but is pretty sure it was in the early ’80s. Thus, they use their five-year time window to cover 1980-1984. The answer is 1982 so both teams are correct and discard their two and five year time windows respectively.

If a “wild” is rolled, the die-rolling team gets to select the category of their choice (obviously the category they know the best). Die-rolling and question-reading alternate from team to team and player to player after each round.

I passed on this game so many times at thrift stores because I thought it was just another boring trivia game. Until I learned how similar it is to Chronology (a great game that I wish I hadn’t sold), I had zero interest in it. Unfortunately, I found out that unlike Chronology you really, really need to know your dates to play Times to Remember successfully. Even though I know a lot of random trivia, since I was a young child when this game was published, I basically just had to guess for most of the questions. I would usually know a general range of years it could be (or at least the right decade) but once you discard your four, five, six, and seven year time windows it gets really hard if you weren’t alive when these events happened. Times to Remember isn’t a bad game, it just really isn’t for younger people like me (unless you really know your trivia and dates).

While Times to Remember is still a pretty good game, I greatly prefer Chronology because it is much more forgiving, easier, and covers a much wider period of time. Chronology also has a really neat mechanic where you don’t have to know when the event happened, you just need to know if it happened before or after the other cards you have in your “timeline” (you basically just need to put ten events in the order that they happened). While this makes that game much easier than Times to Remember (and adds quite a bit of luck), it also makes for a much more fun and competitive game.

Outside of just not being updated enough, there really isn’t anything wrong with Times to Remember. The mechanics are fine, the game is very challenging (good for trivia buffs, not so good for people who weren’t around when the events happened), and the components are pretty high quality. The time windows are a neat way to lock in your answer. The game also comes with a ton of questions (250 two-sided cards which equals 2,500 questions). You could get hundreds of game sessions out of Times to Remember if you like the concept. That’s quite a bit of bang for your buck.

Also adding to the value, you can easily find the game for under $10 on Amazon or eBay. If you are are a thrift store junkie like me, Times to Remember seems very easy to find for a dollar or two (I picked my copy up at a St. Vincent de Paul for a whole 75 cents). I see it most days I go out thrifting in at least one or two thrift stores. If you find it at a thrift store for a few dollars and you are a trivia buff I would definitely give the game a chance (unless you don’t like the more difficult trivia games).

In summary, if you love trivia and know things like what year “scholars authenticated an old manuscript as Mozart’s first symphony, written when he was nine” (1983) or when the movie “Wait Until Dark” came out (1967), Times to Remember is probably for you. It is a good game and you will probably get a ton of play time out of it for less than $10 (check thrift stores for an even better deal). I personally like trivia but I am nowhere near this level yet (and providing a specific date is tougher than naming a movie title or person to begin with) so while I enjoyed the game, I probably won’t be keeping it. If this game was updated with a newer version, I could definitely see myself loving it though.

hello we have one like this and wonder curious like present 90's to 2000 times to remember games??? thanks teri

As far as Times to Remember itself there was only one English version of the game which was released in 1991. As far as games similar to Times to Remember there are more recent games that are similar but not exactly the same. My first recommendation would be Chronology. In Chronology you are given cards of different historical events and you have to place them in chronological order. Another option could be Timeline. I haven't played it yet but it has many different versions which includes topics like history and movies/music.

I really wish that someone would decide to create a new version of Times to Remember because the mechanics are actually quite good. The main problem that I had with the game was that it felt kind of outdated.

[…] Chronology sounds interesting, check out our reviews of Times To Remember and Say […]

[…] is very similar to games like Chronology, Wits & Wagers, and Times to Remember (which I have already reviewed) where you don’t have to know the exact answers to trivia questions, you just need to be […]