To begin the game set up the racetrack with either the included design or create your own racetrack. Set up the LEGO die up with one of the orange pieces on two opposite sides. The players can also choose to add the yellow piece to the die if they want to add the shortcut rules. Each player takes a race car and seven movement squares of the same color. Place the cars on the starting line.

To begin each player’s turn they roll the die. If there is an empty space on the side of the die that is face up, the player attaches one of their movement squares to that side of the die. The player then looks at the colors showing on the top of the die. An orange space (turbo boost) allows the current player to move to the next orange brick on the track as long as they don’t pass through oil slick. Each player then moves their piece one space for each square of their color that is showing on the top face of the die. Movement begins with the player that rolled the die and moves clockwise. While moving if a player lands on a space occupied by another player, they move to the next available space ahead of the other player. After all of the bricks on the dice have been accounted for, the die is passed to the next player. 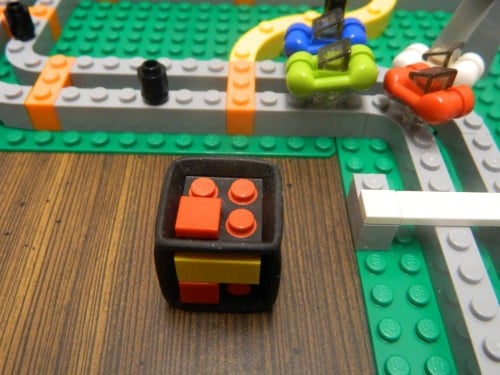 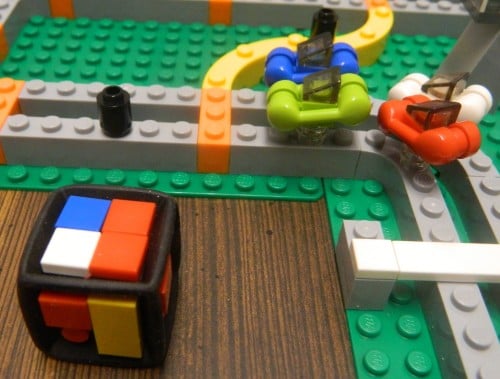 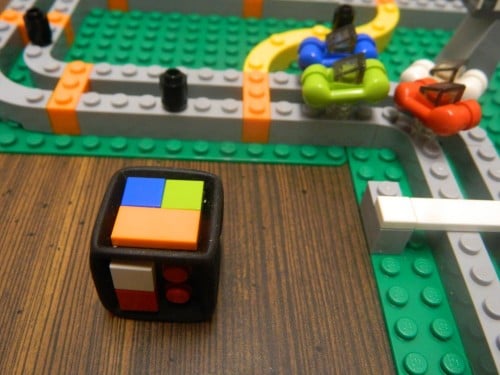 In this scenario the current player would move to the next orange space. Then the blue and green players would get to move a space.

While moving around the track players may encounter oil slicks (the black cylinder pieces). If a player runs into one of the cylinders or lands on the space before an oil slick, they hit it. When you hit an oil slick you remove it from the track, the player who hit it must remove one of their movement squares from the die, and the player cannot move any further during the current turn.

During the game players may also encounter shortcuts (yellow pieces). Player may move their cars along the shortcuts in order to save some time. If the players added the yellow piece to the die before beginning the game, an additional rule is added. If a player rolls the side with the yellow brick, they are able to move one of the shortcut pieces on the gameboard. The piece can be moved anywhere on the inside of the track but one end of the shortcut piece must touch an orange brick.

You can also add rules for a pit lane. The pit lane is made using the two small curved red pieces and one small gray piece. When a player enters the pit lane the game offers two different rules that players can use:

The first player to reach the finish line wins the game.

LEGO is beloved by many people around the world and is arguably the most popular toy brand in the world right now. As the LEGO brand has grown, it has branched off into other mediums including video games and movies. LEGO has also made quite a few board games over the years. When I found Race 3000 at a thrift store I thought it looked pretty simple and childish but I wanted to try it out since the game seemed to have some interesting ideas. The problem with LEGO Race 3000 is that it fails to successfully implement any of these ideas.

The most interesting idea in the game is the changeable die. This idea had quite a bit of potential. With the die always changing player’s fortunes could have always been changing. The game could have created some interesting mechanics that added some strategy to the game. Unfortunately the game wastes the die’s potential. If you follow the game’s written rules the die doesn’t change the game that much.

The problem with the die is that there are plenty of opportunities to add to the die but very few opportunities to remove bricks from the die. Since pieces are rarely removed, the player who can get the most pieces on the die is most likely to win the game. In the early game you need to hope that you keep rolling sides on the die that have open spaces. Getting lucky early seems to have a compounding effect since if you get a lot of bricks on the die you are likely to have your color rolled more often so you will get more spaces. If there was a consistent way to remove bricks from the die, players could use some strategy to offset some early bad luck.

The other creative idea in the game is the changeable racing track. Before reading the rules I thought this could be a cool idea since changing up the track could have made the game pretty unique. Unfortunately this idea is wasted since the game only allows you to move the shortcut track pieces which rarely impacts the game. I wanted the game to have some rules where you could change the whole track on the fly. That would have added a lot of strategy to the game and made it more than a simple roll and move game.

The changeable track does lead to quite a bit of replay value though. If you are willing to take the time to make new tracks you could end up never playing the same track twice. I think that assembling the track is the best part of the game. If you or your children love playing with LEGOs you will enjoy putting the tracks together. It is not a good sign though that the best part of a game is setting it up.

Race 3000 is just not that fun. The game pretty much boils down to a typical roll and move game. There is no strategy to the game. You just roll the die and everyone moves their piece forward the corresponding number of spaces. The game had some interesting ideas but none of them live up to their potential. The changeable die doesn’t add anything to the game and the little pieces are sometimes hard to take off. You never get to change up the track during gameplay. The cars are sometimes hard to take off and when you do take them off they sometimes take part of the track with them.

The game is not very good in my opinion but younger children and big fans of LEGO may enjoy it quite a bit more than I did. While the original gameplay is not very good, the game does stress that players can and should come up with their own house rules. By adding some good house rules you could fix some of the problems with the game and actually make it into a decent game.

Race 3000 is not a very good game in my opinion. The game wastes several good ideas and ends up being a bland old roll and move game. If you don’t love LEGO or have younger children there is nothing in the game that will interest you. If you love LEGOs and are willing to put in some time creating some good house rules you may get some enjoyment out of the game.