To be the first player to get all three of their marbles into the center cup.

Turn the gameboard upside down. Choose how many of the keys you are going to use. The more keys you use the easier the game is going to be. When you place keys into the bottom of the gameboard, place the key all of the way in and then turn the key to lock it into place. The keys should be scattered throughout the gameboard.

Each player chooses a color and takes all three marbles of that color. All of the players roll the die with the high roller getting to go first. 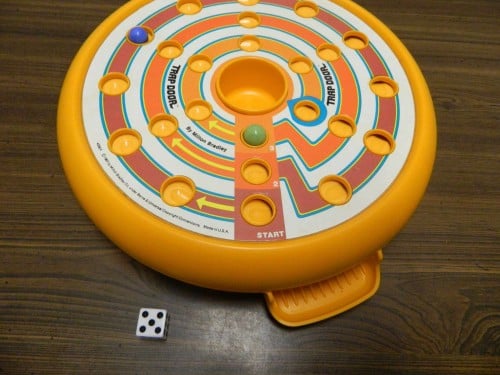 The blue player has rolled a five. They move their marble five spaces around the gameboard.

If a player rolls a two or three and has a marble that isn’t yet on the gameboard, they can start the marble on the 2/3 space (depending on which number was rolled) which lets the player skip a lot of the spaces on the gameboard. 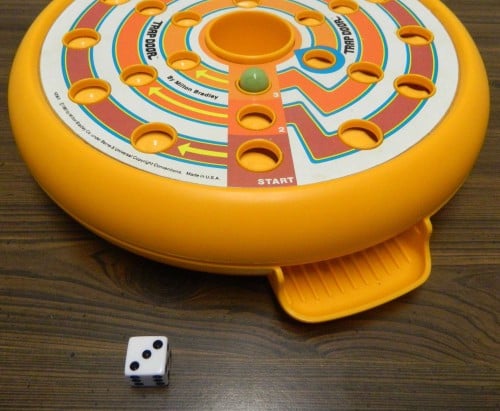 The green player has rolled a three. They are able to place one of their marbles that aren’t on the gameboard on the number three shortcut space.

To place a marble in the center cup, the marble has to move to the cup by exact count. 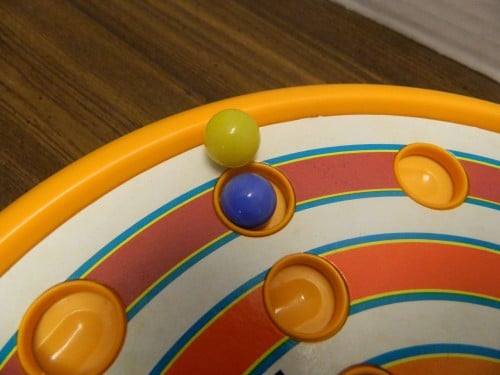 The first player to get all three of their marbles into the center cup wins the game. 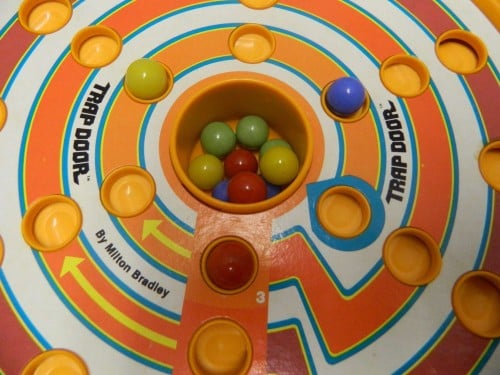 The green player has gotten all three of their marbles to the center. They have won the game.

Trap Door pretty much plays like your typical roll and move game. You roll the die and move your piece hoping to be the first player to get all of your pieces to the finish. It shares a lot in common with games like Parcheesi and Sorry where you try to land on other player’s pieces in order to send them back to the start.

The one unique mechanic in Trap Door is the traps and the turning mechanic. The traps are somewhat interesting because you try to avoid the traps while sending the other players down them. Being able to twist the gameboard gives you a chance to try and protect your pieces from being stuck on trap spaces.

Being a children’s game it isn’t that surprising that there isn’t a lot of strategy in the game. There is really only two strategic decisions you can make in the game.

First, unless you roll a two or three you don’t want to move a marble from the start space unless you have no other marbles to move. Using the shortcut is a big advantage in the game so you want to keep your ability to use it open for as long as possible. The shortcut will save you 12 spaces (rolling a 2), or 18 spaces (rolling a 3) which translates to quite a few turns rolling high numbers. Using the shortcuts also give you a better chance of landing on another player’s marble.

The only other strategy involves trying to land on other player’s marbles whenever possible. You can’t lose when you land on another player’s marble. You either send them back to the beginning or you gain a free space. If you send them down a trap you also know that the space that your marbles is on is a trap so you are going to want to turn the gameboard at the end of your turn.

While Trap Door has a tiny amount of strategy, it relies way too much on luck. Unless the other players make really bad moves, the luckiest player will win the game. The luck of the roll can impact the game in many ways. You could roll well and get a two or three and be able to skip a large portion of the board that saves you a lot of time. You can also get lucky and land on another player’s space either getting to move forward another space or sending the other player back to the start.

If the game I played is any indication, that will happen a lot. Each person was probably sent back to the start at least ten times in the game. This is so prevalent in the game for two reasons. First at least half of the spaces on the board will be traps. Unless you want the game to last forever I would recommend using all 10 keys or you will be even more likely to be sent back to the start. Unless it was just bad luck, almost every time a player landed on another player it was on a trap space. Since it is quite easy to use one of the shortcuts, a bunch of players will get bunched up near the finish. This means that it is quite easy to land on another player’s marble. Basically the game is a test of who can get lucky enough to get their marbles into the center cup before someone lands on them. This is especially frustrating if you are able to move around the entire board and then get knocked back to the start just as you are about to get your marble into the center cup.

With all of the times that you will get sent back to the start, it shouldn’t be a surprise that there are huge swings in momentum. You can easily go from first to last and vice versa. The winner is likely going to be the player that has a couple lucky rolls in a row at the end of the game.

Overall the components for the game are decent. The gameboard is fine and pretty clever since the gameboard is set up so you can randomize every game by changing the locations of the safe zones. You can even make the game harder by removing safe zones. Even though it is sometimes hard to slide in the keys, setting up the board is very easy. My copy of the game doesn’t really make a clicking sound anymore as you turn it though so the board can wear out over time. The gameboard also has some problems getting the marbles out of some of the holes if the marble is placed on a trap space. In these situations it is pretty obvious that a marble is on a trap space because the marble sinks down a little which makes it hard to get out on future turns. Otherwise the gameboard’s artwork is pretty bland but serves its’ purpose.

Trap Door is pretty much what you would expect from a roll and move game. The game has little strategy and relies almost exclusively on luck. The trap mechanic in Trap Door is not bad but it comes into play way too often since it seems like you are always being sent back to the start. Nonetheless, Trap Door is not a terrible game. If you want some mindless fun you can do a lot worse than Trap Door.

While Trap Door is not a terrible game I probably wouldn’t pay a lot for it unless you have fond memories of the game. If you like roll and move games I could see picking the game up at a rummage sale or a thrift store. Otherwise I would probably not recommend picking up Trap Door.

If you would like to purchase Trap Door, you can find it on Amazon. Trap Door