How to Play the Ripley’s Believe It or Not! Game

A player begins their turn by rolling the die. The player moves their playing piece the number of spaces they rolled. While moving players can move their piece in any direction but may not change directions while moving. Players can also not change paths on their turn unless they move through a continent space.

While moving if a player lands on a space (not a continent space) occupied by another player, the current player can move the other player’s piece to any continent of their choice. 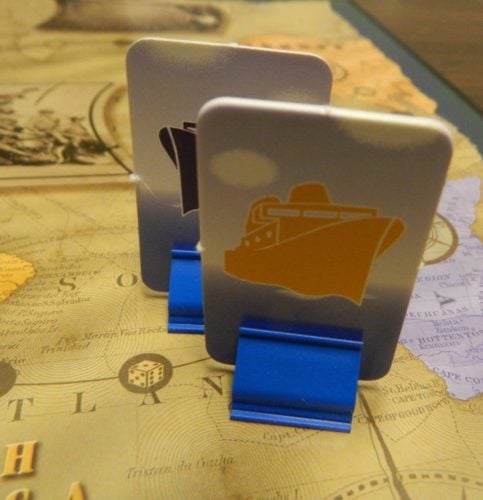 When a player lands on a continent space (does not have to be by exact count), they can choose to stop moving their playing piece to answer a trivia question. 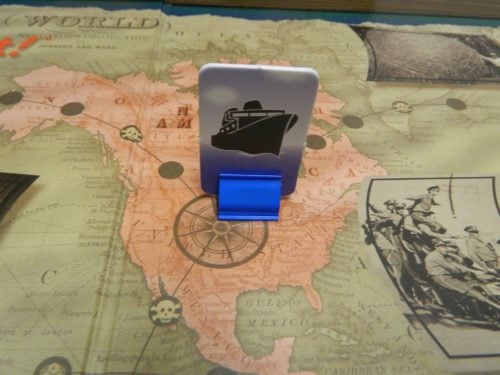 The blue player has landed on North America so they can choose to stop and answer a trivia question.

The player to the left of the current player takes the top card from the trivia card deck and reads the top or bottom statement (depending on what was chosen at the beginning of the game). Each statement is true or false with true statements being printed in bold on the card. 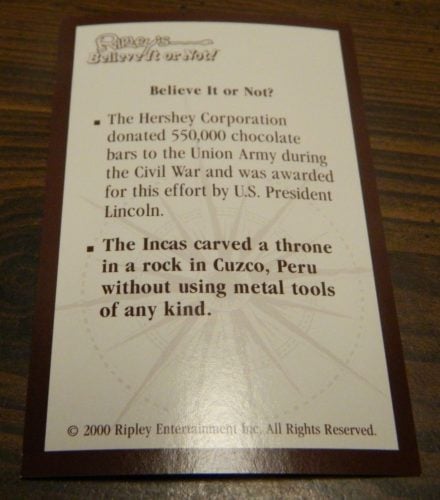 The betting players will take actions based on whether they bet correctly or not.

Once a player has a face up visa card from every continent, they move onto the exhibition phase of the game.

This player has acquired a visa card from every continent so they can move onto the next phase of the game.

In this phase of the game whenever a player reaches a new continent they will answer the top exhibition picture card. Each card has a picture on one side and three statements on the back. One of the three statements corresponds to the picture on the other side. 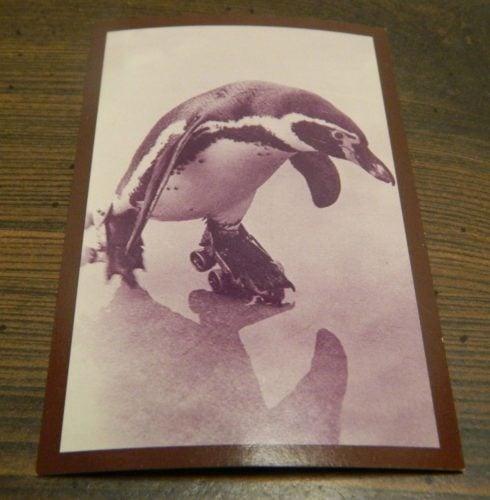 While another player reads the statements on the back, the current player has to determine which applies to this picture. 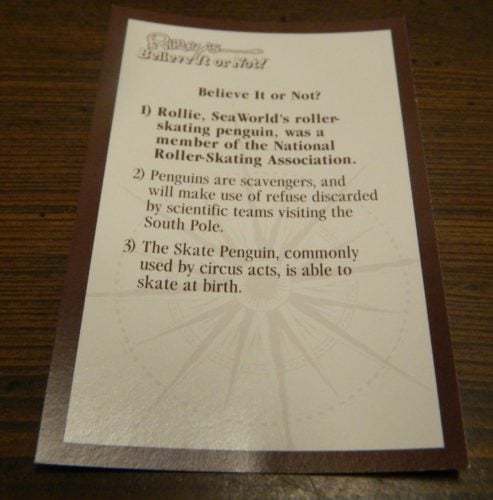 The previous picture was of Rollie, Sea World’s roller skating penguin. If the player guessed correctly they win the game.

If the current player guesses incorrectly, their turn ends. On their next turn they must move towards another continent in order to try another exhibition picture card.

The first player to correctly answer a exhibition picture card wins the game.

My Thoughts on the Ripley’s Believe It or Not! Game

One of the most popular types of board games is the trivia game. With the genre being so popular it does have some serious problems with originality. Most trivia games consist of asking questions with players earning points for each question they answer correctly. The first player/team that scores a certain amount of points or answers a question correctly in each category first wins the game. With most trivia games basically playing exactly the same I like it when trivia games try to do something original. In the case of the Ripley’s Believe It or Not! Game though, originality is not all its cracked up to be.

The biggest problem with the Ripley’s Believe It or Not! Game is the fact that in it’s attempt to do something original, the game ends up adding a lot of unnecessary mechanics that just feel like a waste of time. Most of your time with the game will involve you moving around the board trying to play a visa card from every continent. This involves a lot of pointless dice rolling as you move between the continents adding luck to a genre that doesn’t need it. I know I love it when trivia games have unnecessary luck added.

While I am not a fan of the dice rolling, the worst mechanic involves the visa cards. The reason I hate the visa cards so much is that they just add luck to the game along with a bunch of semi-confusing and pointless mechanics that do nothing but waste time. A trivia game is supposed to focus on players answering trivia questions correctly. The visa cards force players to get lucky and draw the right visa cards. It doesn’t matter how many questions you get correctly if you can’t draw the last couple of visa cards you need to proceed to the next stage.

In addition to hoping you draw the right visa cards you have to hope that the betting mechanic goes in your favor. I can see that the designers added the betting mechanic to keep players involved when it wasn’t their turn but the mechanic is flawed. First of all for most of the questions you won’t even be able to bet. If you don’t have a card for the current continent or already have one played in front of you, you can’t bet. Even if you can bet on the question it is basically a complete guess since you don’t know the answer to the question and you don’t know what the player is going to answer. Basically you have to just guess and hope you are right since if you are wrong you might be giving the current player a visa card they need. Even though the mechanic is flawed, you basically have to take a risk every so often since it is one of the only ways that you can catch up if you fall behind.

Before playing the Ripley’s Believe It or Not Game I assumed it was just going to be another generic trivia game and after playing the game I think it would have been better if it was. The problem is that every mechanic that they tried to add to the basic trivia gameplay makes the game worse. The visa cards and the board movement mechanics just add unnecessary complexity and time to the game while not actually adding anything of value. If I were ever going to play the game again (very unlikely) I would just eliminate all of these mechanics from the game and just use the question cards like a normal trivia game. I really don’t understand why the designers decided to add all of these pointless mechanics since the 1984 and 2006 versions of the game figured out that it would be best to just get right to the point and be a normal trivia game.

So you might be wondering how good are the trivia questions? While some of the facts are quite interesting, the game kind of drops the ball in this department as well. One problem that I had with the trivia questions was the fact that you basically have to just guess for most of them. There really isn’t even much room to make an educated guess. The only way you can avoid a complete guess is if you have somehow already heard the story or are familiar enough with the topic that you can tell that part of the statement is false. If neither apply to the current question all you can do is guess.

So you have trudged through a pretty bad trivia game and have finally acquired all seven continent visa cards. You have finally reached what you hope is the final question of the game. At this point in the game you encounter the single redeeming quality of the game, the picture trivia cards. It is odd that the best part of the game takes up so little of the actual game. If the game would have just focused on the picture cards it actually could have been a pretty solid trivia game.

What I like about the picture cards is that they have more to them than just guessing whether a statement is true or false. The picture cards have a picture of the subject of the question and three different statements. Players have to choose which of the three statements actually apply to the picture. I liked these trivia cards a lot more than the normal trivia cards since you can actually make an educated guess. These questions actually feel like real trivia questions instead of simple true or false questions like the rest of the game.

So I didn’t like the Ripley’s Believe It or Not! Game but what about its’ components? Unfortunately the components don’t fare much better. I will give the game credit for including quite a few trivia cards. The game includes 220 normal trivia cards which means that there are 880 statements for the main portion of the game. This is plenty of statements where you likely will never have to repeat a card. The game also includes 110 exhibit picture cards which is enough for the game even though I wish all of the trivia cards would have been photo cards. Other than the quantity of the cards though, the component quality isn’t great. They serve their purpose but feel a little cheap.

Should You Buy the Ripley’s Believe It or Not! Game?

Before playing the Ripley’s Believe It or Not! Game I had some hope for it. A trivia game focused on weird and unique facts could have made for a solid trivia game. The problem with the game is that by trying to distinguish itself from other trivia games, the Ripley’s Believe It or Not! Game actually made itself worse. Outside the trivia questions, all of the game’s other mechanics are pointless. They add unnecessary luck, complexity and time to the game which ruins it. Add in that the normal trivia cards aren’t that interesting and you are left with a pretty dull trivia game. The one saving grace for the game, the picture cards, come into play way too late to save the game.

If you would like to purchase the Ripley’s Believe It or Not! Game, you can find it online: Amazon