Skip to Content
I will readily admit to being quite the couch potato. I even used to read TV Guide back in the day. If you are a fan of trivia games and TV like me, TV Guide: The Game is a solid but unspectacular game. However, the game is quite outdated (it was released in 1997) and only really for that very small niche of trivia game fans who also love television.
How to Play | My Thoughts | Should You Buy? | Comments

How to Play TV Guide: The Game

Attach both sets of score clips so that the arrows each point to zero. Insert two AAA batteries into the “remote” that comes with the game. Finally, divide players into two even teams and have each team choose a pawn and place it on the start space on the game board. That’s it, you’re ready to go.

TV Guide: The Game is played very similarly to most trivia games, except that all of the questions are related to television in some way. Teams alternate being the asking team and the answering team. Each turn goes exactly the same way. The asking team presses the category number selector button on the remote, which will then announce a number from #000-899. The asking team looks up the number in the TV Guide booklet and announces the category. By the way, if you don’t have the “remote,” you don’t really need it as it is basically just a random number generator which you could easily set up online (it also has two buttons that makes noises based on whether the team was correct or incorrect but that’s it). 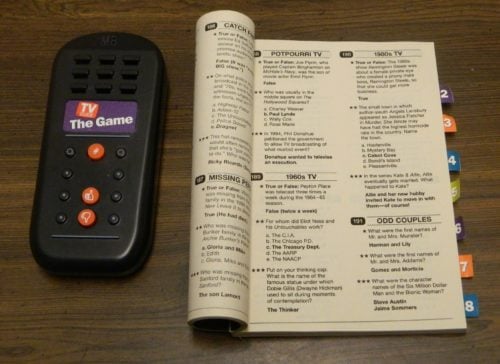 The “remote” and sample questions.

After the number and category (most are generic like “potpourri TV” or “sitcoms,” but some are very specific like “The Twilight Zone”) are announced, the answering team decides whether they want to go for the 1-point, 2-point, or 3-point question. Most one point questions are true or false, the two pointers are multiple choice, and the three-point questions require an answer with no help. Once the team has picked which point value question they want, the asking team reads the question and the answering team attempts to answer it.

If the team answers incorrectly, they do not score or move and their turn is over. If they answer correctly and they are on a regular space of the board, they move their pawn one space on the game board and slide both of their score clips one, two, or three notches (depending on the value of the question they correctly answered). After moving both the pawn and the score clips, their turn is now over.

If a team answers correctly while their pawn is on one of the extra-question spaces (“go again,” “another turn,” “keep going,” or “extra turn”), they have the option of going for a second question (but if they are incorrect they lose the score clip spaces they earned from the first question). If they decide not to go for the extra question, move the pawn and score chips like normal. However, if they decide to take a chance and go for it don’t move their pawn or bottom score clip just yet (still move the top score clip the correct amount but keep the bottom one where it is in case they get the second question wrong). Instead, have the asking team press the number selector button on the “remote” again to select a new category. After the asking team announces the category, the answering team again decides the difficulty of the question they would like. Slide the top score clip up that many more spaces to show how many points are on the line for this second question. The asking team then asks the question and the answering team attempts to come up with the correct answer. If they are correct, slide the bottom score clip up to meet the top clip (they get all the points from both questions). If they are incorrect, slide the top score clip down to meet the bottom clip (they lose the points they earned from the first question). Whether the team was correct or incorrect on this second question, their turn is now over (move their pawn one space on the board). 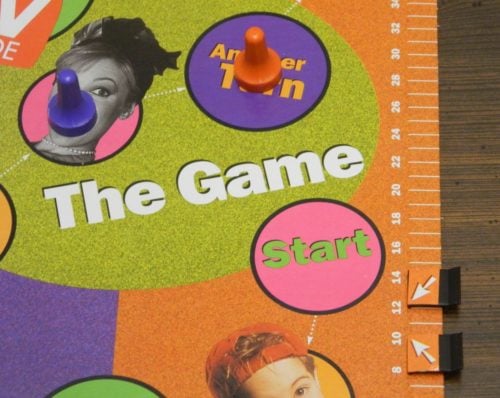 The orange player has correctly answered a two point question while on the “another turn” space. They can risk those two points on another question if they would like but if they are incorrect on the second question, the top clip will slide back down and they will lose the points they earned this round.

The game continues in the same manner until a team reaches the “8 point bonus space” at the end of the board. The first team to reach that space earns an extra eight points and ends the game. The team with the most points wins the game. 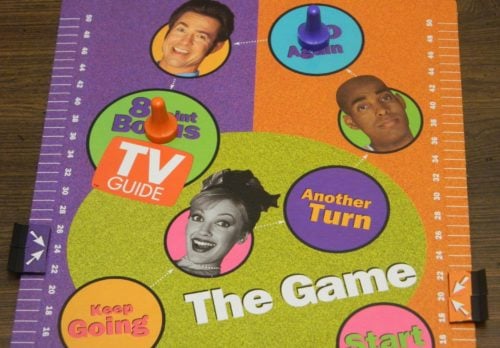 The orange player has reached the 8 point bonus space at the end of the board. They receive eight bonus points which means they win with 28 points versus the purple player’s 24.

TV Guide: The Game also provides a few variant rules for different ways you could play the game. The first option is the team challenge which requires a moderator to read the questions. In this version of the game, only three-point questions are asked and the other team can steal if the first team answers incorrectly. However, the second team is risking three points on their answer. All other rules are the same (except that you can also win by being the first team to reach 50 points).

The second variant is the all or nothing challenge, which doesn’t use pawns at all. In this game variant, teams get a chance to answer all three questions in a category. For each question they answer correctly, move the score clip up that amount of points. When they answer a question incorrectly (or correctly answer all three questions in the category), their turn is over and they receive no additional points (despite the name of this variant they don’t lose the points they had already earned that round). In this variant, the first team to earn 50 points wins the game.

My Thoughts on TV Guide: The Game

TV Guide: The Game is one of those board games that is very hard to review. It doesn’t do anything terribly wrong but also doesn’t really add anything to the genre or do anything particularly great either. It is also meant for an extremely small niche of gamers, trivia fans who specialize in television.

The biggest problem TV Guide: The Game has is also something that isn’t at all its fault, the fact that it is quite outdated since the game is over twenty years old (published in 1997). This means that older people have a significant advantage over younger players (though I have only watched a few shows older than 1997 and did pretty well). This is also only about one topic (though some questions are easier if you know topics like music, politics, etc.) so TV buffs are obviously going to have a huge advantage as well. Other than that there really aren’t any huge negatives to this game. That would be a good sign for this game if it weren’t for the fact that it also doesn’t really do anything new either. The biggest changes to standard trivia game are the additions of the remote and the board having a few spaces that allow you to risk your earned points on another question. However, the remote is pretty much pointless as it is just a random number generator and sound effects player. I actually like the extra-question space mechanic but I wish they would have just got rid of the board and allowed you to gamble as much as you’d like (even more than once per turn if you continue to answer questions correctly). It isn’t really that big of a change (and many other trivia games have similar mechanics) but it does improve the game slightly.

One thing I have a mixed reaction to is the fact that the questions are printed in a TV Guide-like book instead of on cards. Cards are usually easier to use but the TV Guide is pretty cool (especially for people like me who used to read the magazine). Theoretically, if you mess with the rules a little bit (which I would suggest doing anyway), you could just keep the TV Guide booklet and ditch everything else in the box making for an extremely small trivia game. Overall, I think the coolness of the TV Guide booklet outweighs the annoyance of flipping through a book instead of just picking a card, but just slightly. The booklet contains 2700 questions, which is a pretty good supply.

If you decide to purchase TV Guide: The Game, I would make some minor rule changes. Personally, I would play to a certain point total (probably not the suggested 50 from the variant games though) and ditch the board completely (with the board the game is over too quickly since there aren’t many spaces on it). I would also allow players or teams to always try to press their luck to earn more points as well.

Should You Buy TV Guide: The Game?

Overall, TV Guide: The Game is perfectly fine and possibly worth a try if you love trivia games and TV, as long as you can get past it being quite outdated (or you prefer television from 1997 and earlier). It isn’t the best TV-themed trivia game out there but it is serviceable. However, this game is only decent for people in that small niche of trivia fans who also love TV. For everyone else, it will be pretty boring and probably isn’t worth a try.

If you would like to purchase TV Guide: The Game, you can find it on Amazon or eBay.