The party game genre has always been a popular genre for board games. While there are a lot of good party games, there are a lot of bad party games as well. The problem is that too many games try to do the same thing and it is hard to find party games that stand out and do something original for a change. When I first saw What’s Yours Like? I thought it looked like your typical generic party game that was trying a little too hard to appear more adult than it actually was. The main reason I eventually ended up picking up What’s yours Like? is that I found it for $1. While reading the rules though I was intrigued since the game had some mechanics that I really haven’t seen in many other party games. Unfortunately while What’s Yours Like? shows a lot of potential, the game can be ruined by players’ competitive nature.

On The Hot Seat

While playing the game one player will be on the hot seat while the rest of the players will be giving clues. The player to the left of the current hot seat player chooses a card from the box and places it inside the concealer folder. The player passes the card around the table so everyone but the player on the hot seat can read the word on the card. 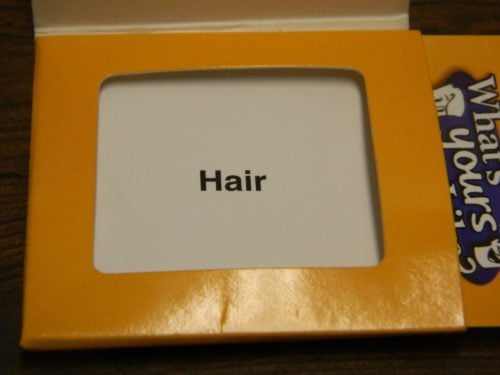 For this round the players will describe their own hair. 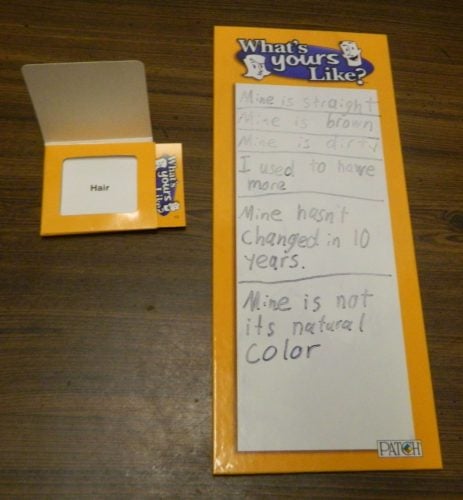 For this round the player needed six clues in order to guess the word. The player on the hot seat will score six points. 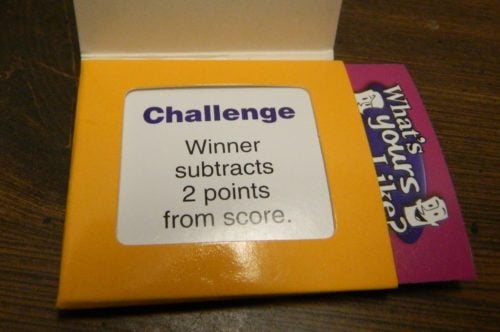 After the challenge, the player that was on the hot seat will get to play a normal hot seat round. If another challenge card is drawn it is discarded and a new card is drawn.

The game ends when the players have completed the agreed upon number of rounds. The player with the least amount of points wins the game. If two or more players are tied for the least points, all of the tied players play a challenge round to determine the winner.

After getting over the fact that What’s Yours Like? is trying to look more dirty/adult than it actually is, I was a little surprised that the game’s concept sounded more interesting than I was expecting. The basic premise of the game is that one player is on the hot seat while the other players give them clues about the current word. Instead of just giving clues about the item itself though, players have to describe how the word relates to themselves. With the goal of scoring the least points, players need to give the player truthful clues but they try to make them as misleading as possible so the player needs more clues to guess the word.

I think the best thing about What’s Yours Like? is the fact that the game lets people get really creative with the clues they decide to give. The game rewards players that are able to think creatively about the clues that they give. Since every clue has to actually be truthful you can’t lie with the clue you give. Good clue givers will give clues that are technically true and yet won’t give the player on the hot seat any real information. Good clue givers could give several clues before they give any meaningful information to the hot seat player. While this kind of ruins the competitive nature of the game (more on this later), I think it is enjoyable seeing how little information a player can give with a clue.

While it doesn’t have as much potential for humor as a lot of other party games, What’s Yours Like? can have some funny moments with the right groups. Clever clue givers can give clues that technically are true and yet get a chuckle out of the players. The funniest moments in the game are when the players that know the word laugh at a clue and the player on the hot seat has no idea why everyone is laughing.

While on the topic of humor I would like to address the fact that the game tries to paint itself as more of a dirty/adult party game. What’s Yours Like? somewhat implies that it is a dirty/adult games and yet it is a pretty innocent game. I wouldn’t play the game with young children but based on the cards we used there is nothing inappropriate with the game itself. You should have no problem playing the game with older children. I could see the game being quite dirty though if the players want to make it dirty. I could see it being pretty easy to make clues sound a lot dirtier than they actually are and I see groups wanting to make clues as dirty sounding as possible. Basically What’s Yours Like? can be as adult as you want it to be as the players are in control of how dirty the game becomes.

Getting back to gameplay I think the idea of the challenge cards are interesting. They come up a little too often in the game but I think they are a nice change of pace. Having two players compete to try and guess the word changes things up and I could argue is actually more enjoyable than the normal game. I actually think this might be the best way to play the game if you are going to keep score. Instead of trying to guess words with the least number of clues, the challenge mode rewards players that are able to guess the words quicker than the player they were facing off against. Thus if a player gives a good or bad clue it impacts both players equally and there is no reason to give terrible clues.

When you look at What’s Yours Like? it has all of the makings of a good party game. The mechanics are fun and unique. The game is easy to pick up and play. The game works with older children and adults. Although the game has quite a bit going for it, it never lives up to its’ potential. I think this mostly comes down to some poor rule choices which almost ruin the entire game.

To prevent these issues I honestly think it would be better to just ditch the scoring mechanic entirely. I think it would be more enjoyable just playing the game to have fun and don’t even count the score or determine a winner. Without any actual scoring the game will be more enjoyable since players will then feel like they can eventually start giving clues that are actually helpful. Personally I think the best way to approach a word is to go around the table one or two times with really vague clues to mess with the player a little. Then players should start giving better clues or the game loses it fun as the player will get no closer to guessing the word.

If you don’t want to entirely get rid of the scoring, you need to seriously look at some house rules in order to curb players ability to give poor clues. You will need to come up with rules about what types of clues are allowed and which are off limits. To play the game competitively you really need to come up with a way to force players to actually give clues that are helpful while still letting players be creative with their clues. One rule I think you will have to add is an upper limit on how many points you can score in a round. If there is an upper limit on how many points a player can score, once that limit is reached players can start giving more helpful clues so the player can guess the word.

Another reason why competitiveness is going to be a problem for Whats Yours Like? is that naturally some of the words are easier than others. Some words don’t give you many options for clues while others give players a lot of options. Then you have to factor in the cards that force each player to describe their own favorite for the given word. If peoples’ tastes are quite different the clues might contradict one another making it hard for a player to guess the word. This is just another reason why I think the scoring should be eliminated since some words will likely only take a couple clues to guess while others could easily take over ten clues.

Another potential problem with What’s Yours Like? is that it is going to work best with groups that know each other really well. I don’t think the game is going to work well with people that don’t really know one another. I say this because a lot of the cards have people describing their favorite things or things that they own. If you don’t know their favorite things, their clues are not going to be very helpful for you. While some of the cards will work pretty well with most groups, the game will be more enjoyable with people that know each other.

As far as the components there are some good things and some things that need some work. On the positive side the game comes with quite a few cards. The game comes with 188 word cards so you can play 376 words before you ever have to repeat a word. At that point you probably aren’t going to remember the words that have already been played so I don’t see any problems with replaying the game with the same cards. The problem is that the quality of the components could have been better. The cards are pretty thin and the boards don’t erase as well as they should.

What’s Yours Like? is an interesting game because it has the makings of a good party game. The basic mechanic of giving clues that while truthful, might not always be very helpful is a fun mechanic. The game is also quick and easy to play and can be played by people of all ages. The problem is that a lack of clear rules in a couple areas almost ruin the game. Personally I think the game would have been better if the scoring was entirely eliminated since it just leads to competitive players purposely giving bad clues in order to improve their chances of winning the game. If you keep score you really need to come up with good house rules in order to force players into eventually giving good clues.

If you don’t really care for party games or don’t like the game’s concept I would pass on What’s Yours Like?. If you like the game’s concept though and you are either willing to get rid of the scoring or come up with some house rules to get rid of the competitive issues, I think you can have some fun with What’s Yours Like?. I would only recommend picking up the game though if you can find it for a couple dollars.