While I love just about every genre of television and film, the time travel sub-genre is one of my absolute favorites and I’ll try just about anything in it that I come across. It is a hard genre to get right and nearly impossible to keep plot holes or paradoxes to a minimum, but it also has so much potential and can be done in so many different ways. I would say the only genre with more possible story ideas is the “alternate/parallel universe” genre where characters can go to any of the trillions of possible alternate Earths that could have evolved. While I’m not the type of viewer who refuses to watch a show because it doesn’t make 100% scientific sense or will turn something off as soon as I see a plot hole, of course it’s definitely a plus when there aren’t major problems in these areas. Time travel is especially tricky in these areas but I usually don’t mind as long as the show is entertaining enough. 12 Monkeys is both entertaining and extremely well-constructed with very few plot holes once you get to the end of the show. Add in some great characters and a dash of humor and you have one of the best time travel series ever made, if not the best.

12 Monkeys is based on the 1995 film of the same name starring Bruce Willis and Brad Pitt. James Cole (played by Aaron Stanford), a scavenger in the post-apocalyptic world of 2043, is recruited to join “Project Splinter.” Lead by German physicist Katarina Jones (Barbara Sukowa), the goal with Project Splinter is to change the past by time traveling back to the year 2015 to prevent the release of a virus that wiped out seven billion people in less than two years. To do so, he works with virologist Cassie Railly (Amanda Schull) to try to take down the supposed architect of the virus. However, they quickly find out that changing the past is far more difficult than that as a cult called the “Army of the 12 Monkeys” will do everything to ensure that the virus devastates the world. I can’t really go into too much more depth than that without going into serious spoiler territory. That’s one of the problems with writing about serialized TV shows as you can only really do a surface level synopsis or you’ll spoil significant parts of the story.

While I haven’t seen the movie version of 12 Monkeys, I have read a few plot descriptions and it doesn’t seem like the two pieces of media have much in common at all. The title, basic premise (splintering to the past to stop a virus), and some of the characters are pretty much the only thing the two have in common, especially once the first season ends. To be honest, based on the plot descriptions I read I think the movie actually sounds worse as this series seems to have made a lot of more interesting decisions and changes to the premise. Based on how well 12 Monkeys executed its idea, I’m almost certain that it’s better than the movie (I can’t 100% commit to that statement as I haven’t seen it). The series takes a good concept and builds on it in new and interesting ways.

As I wrote earlier, one of the biggest flaws that most serialized time travel shows tend to have is the prevalence of a lot of plot holes and paradoxes. It’s really hard to make a multi-season time travel series without running into at least a few issues in this area but honestly, 12 Monkeys kind of nailed it here. Due to some developments in the first three seasons, I was starting to think the creative team would run into some problems but by the end of the series, nearly all of the holes have been paved over and pretty much all of the pieces connect. While I can’t go into detail without spoiling things, if you start this series and think that certain developments don’t make any logical sense you don’t have to worry as it will all make sense by the end. It helps that the showrunners appear to have actually planned the whole show out instead of flying by the seat of their pants. There’s even some seemingly minor things mentioned in season one that actually pay off in the last few episodes of the series. I’m sure there’s still a few minor “plot holes,” I just can’t personally think of any of them off hand. For a show that ran for four seasons and 47 episodes, the fact that I can’t think of a single major error in the show’s narrative is quite an accomplishment (since most serialized time travel series start developing a large amount of paradoxes and plot holes after just a season or two). With a few modifications, I do think 12 Monkeys could have ended just as well after season three as season four. However, the final season is also more than entertaining enough to make up for having to jump through a few more hoops in the narrative to establish a good ending (and it does wind up sticking the landing anyway with a phenomenal series finale). While I already miss the characters and somewhat wish we got more episodes to spend with them, I do realize it was the right decision to end things after four great seasons as these shows always eventually become unwieldy and bogged down with plot holes no matter how meticulously they were plotted.

Many people online seem to dislike the first season of 12 Monkeys or at least think its mediocre, but most agree that it gets much better afterwards and reaches must-watch TV status by the end of the series. Personally, I enjoyed the first season almost as much as the later three and it’s very good for an introductory season (which I almost always rate significantly lower than subsequent seasons for most shows). It’s maybe a shade worse but this is a very consistent series throughout. Regardless, I didn’t give a single episode of this show worse than a 3/5 and most of those come in the first or second seasons. By the third and fourth season, nearly every episode earned at least a 3.5 or even a 4/5. 12 Monkeys also has one of the best series finales I’ve seen in awhile. It’s funny, epic, wraps up every character’s story and the plot in general in a nice little bow, and is an amazing accomplishment for a Syfy series and the corresponding smaller budget that goes with being on that channel.

Story is important but one thing I’ve been valuing more and more with serialized TV series is character development. You might not need to have the most interesting or likeable characters ever in a movie but if you are going to spend 47 episodes with a small group of characters, you need to be invested in them. This is one thing that really works in 12 Monkeys‘ favor as it has some truly great characters including one that would easily make my all-time top ten list. That character is the absolutely amazing Jennifer Goines (played wonderfully by Emily Hampshire). I can’t put into words how much I love this character, she pretty much steals every scene that she’s in from the first moment she appears. She’s hilarious, an incredible empathetic person, and one of the most realistically portrayed “crazy” people to ever hit television screens. So much of both the fun of the show and the feels come from her. She’s a comedic gem that’s desperately needed in a show like this. For those who’ve seen the movie, she’s playing Brad Pitt’s role (though this character is quite a bit different in the series) meaning she had some big shoes to fill. I personally haven’t seen the movie but I don’t see even Brad Pitt matching her performance. There’s also several other standout characters like Dr. Jones (Barbara Sukowa), Deacon (Todd Stashwick), the very creepy Tall Man (Tom Noonan), and Olivia (Alisen Down). The two leads (Cole and Cassie) aren’t anything to write home about but they’re still solid characters. I know some people thought Aaron Stanford’s acting was pretty weak in the first season or two but I wouldn’t exactly go that far. He’s not the most interesting character ever but I don’t think Stanford’s acting is ever “bad” and he definitely improves as time goes by. When you have so many other standout minor characters, your leads don’t exactly have to knock the ball out of the park to begin with but they are both perfectly fine. The characters in 12 Monkeys are fleshed out so well that even if the story was somehow an incoherent mess (it isn’t), it would still be worth watching for the characters anyway.

Visually, despite being on a Syfy budget, 12 Monkeys can often look surprisingly gorgeous. While a lot of scenes take place in abandoned industrial buildings and an often-used hotel room, there’s also some amazing visuals at times. Detailing why the show looks amazing (especially from season two on) is dipping into spoiler territory so I need to be vague here (hint: there’s a lot of gorgeous reds in the color scheme). Let’s just say that for a series mostly set in a post-apocalyptic future, 12 Monkeys is surprisingly beautiful to look at. The cinematography even was nominated for (and won) a few awards from both the American Society of Cinematographers and the Canadian version. There are some cheap-looking Syfy sets at times but 12 Monkeys also looks nearly HBO quality just as often. I certainly would never have guessed this was a show that aired on Syfy just by looking at it. Thankfully, Mill Creek has done a great job with the Blu-ray quality on this release as well. It’s honestly one of the best looking releases I’ve seen from the company and it is well worth the upgrade in video quality from the DVD releases put out before. If you already own the season-by-season Blu-ray sets that were also put out, this is supposedly the same transfer so the only reason to upgrade would be to save a bit of shelf space. 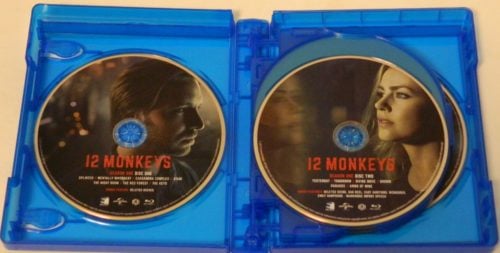 The packaging for 12 Monkeys: The Complete Series on Blu-ray.

Continuing the good news with this complete series Blu-ray release, it appears that all of the extras from the season set releases have been ported over with the exception of a few trailers (no big deal in my opinion). These bonus features include deleted scenes, cast auditions, webisodes, podcast commentaries, a gag reel, and more. While there’s no real behind the scenes featurettes or lengthier extras, outside of HBO shows or smash hits very few get anything like that nowadays. I’m just glad that nearly all of the extras have been ported over to this release.

Ultimately, I went into 12 Monkeys: The Complete Series with reasonably high expectations but I did think the Syfy budget would limit it to being just a slightly above average show. The series wound up surpassing my wildest expectations and is one of the best time travel shows I have ever seen, if not the best of the best. I became invested in the characters and plot more than I ever thought I would. Mill Creek has also done an excellent job with this complete series Blu-ray release and it is well worth the very reasonable price, probably even if you already own the prior DVD season set releases. 12 Monkeys: The Complete Series is absolutely worth a watch and earns a highly recommended seal of approval from me.

Hello, thanks for the review. Season 1 was the best IMO. Does the bluray resume playback? Are there lots of trailers/warnings from FBI...?

I want to upgrade my DVDs.