What Is Renowned Explorers: International Society?: 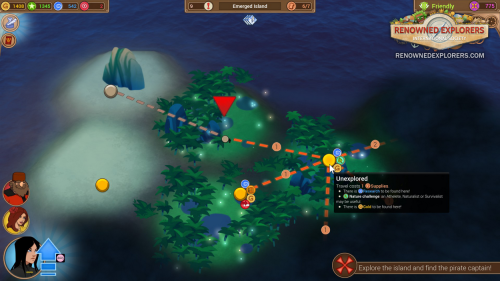 Renowned Explorers is a strategy adventure game with elements of board games, text adventure games, RPGs, and roguelikes. In the game, you select a crew of three adventurers (including a captain) and set off to explore the world, gather riches and treasures, and attempt to earn enough prestige in the International Society to become the world’s most famous explorer. 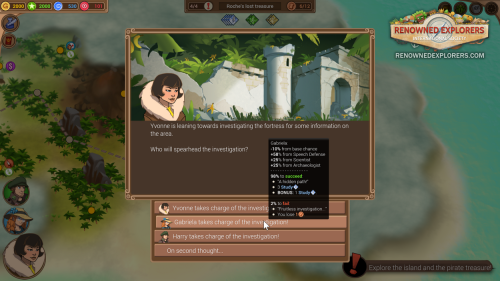 © Abbey Games An example of an event in Renowned Explorers.

Renowned Explorers has a lot of different game elements to it so I’m not going to get into too much detail but the game starts with you selecting three adventurers, all of which have different traits and skills. You will want to pick three explorers that complement each other well (probably one researcher, one combat specialist, and a wild card based on which play style you like the most). After you have picked your crew, you get to go on your first expedition. Expeditions take place on randomized maps and you will have a certain amount of supplies (which are basically turns) to get to the location of the treasure you are hunting for (it will take at least one supply to move to a new location each turn). While you are traveling towards the treasure location, you will run into different encounters that can earn you tokens (which will be redeemed for gold, status, research, and renown once you return from your expedition). Most spaces will test one of your adventurer’s skills (for example, a situation could arise that needs an athlete to complete) and you often get to pick from two or more different ways of solving it. Unless your adventurer is amazing at the required skill, you will then spin a wheel to determine whether your adventurer succeeds or not (depending on how skilled your adventurer is it could be a coin flip, an almost sure thing, or a less than 50% chance of success). 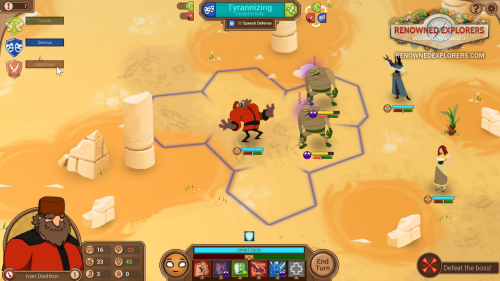 While you are adventuring, you could also run into people or animals who want a fight. When a combat situation begins, your three adventurers must move towards the enemy combatants on a hex map and attack using one of three different attitudes. You can be the diplomat and kill them with kindness (friendly), be aggressive and actually fight them, or scare them away with your deviousness. The combat has a sort of rock-paper-scissors element to it since each attitude is strong against one of the other attitudes and weak against the other one. Aggressive is stronger against friendly but weaker against devious, friendly is stronger against devious but weaker against aggressive, and devious is good against aggressive but not so good against friendly. Each type of enemy has a different attitude (and they can change attitudes during the battle) so each conflict might need to be approached in a different way.

Eventually, you will reach the location of the treasure on the map. When you do so, you will usually face a few different events and eventually end the encounter with a boss battle (some of which are very tough, especially when you get into the four and five star locations). If you successfully beat the boss, you will be rewarded with a random treasure (which will give your adventurers one or more buffs) and your expedition will end. You then can spend the tokens you earned on followers, items (armor, etc.), and a whole bunch of other things that can help your future expeditions. 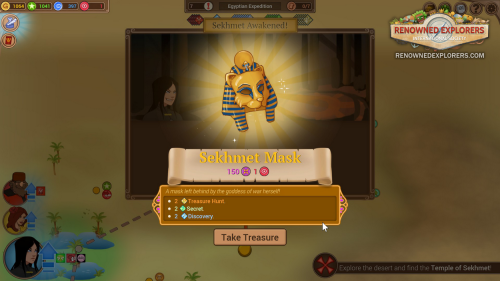 Each game of Renowned Explorers allows you to take five different expeditions. The goal of the game is to earn as much prestige as you can in an effort to become the #1 ranked explorer crew at the end of the game (and beat the obnoxious Matthieu Rivaleux). If you are playing in adventure mode and you ever die in battle you will have to start over again completely (the game is roguelike unless you play in discovery mode). So go on expeditions, find treasure, earn tokens to help you on future expeditions, move up the prestige rankings, and don’t die. That’s the basic gist of the game.

Obviously, we are really big fans of board games here at Geeky Hobbies so it shouldn’t be too surprising that I would love a game that borrows so much from them. Renowned Explorers is one of the best games I’ve played in awhile and I expect to revisit it over and over again. If the concept at all interests you, I think you will enjoy it greatly.

I’ll get the only somewhat negative thing about Renowned Explorers out of way right away. While this isn’t a problem for me, some players might not like that it takes an hour or two to learn the ropes in this game. However, as long as you are willing to put in a little effort to learn the game (and don’t mind playing games that take more than a few minutes to learn) this shouldn’t be a problem. It really isn’t a bad thing that this game has a bit of a learning curve, it mostly just has one because it is very deep with a lot of different mechanics to learn (which is a good thing).

Renowned Explorers has a ton of depth and lots of re-playability to it. There are over 1,000 different party combinations you can make (since there are twenty different explorers who all have different traits and skills and you get to pick three of them for your team), you can focus on one or more of the three different combat styles (aggressive, friendly, or devious), and there are tons of different strategies you can go with (you can attempt to acquire a lot of research to unlock new buffs, you can go heavy on combat, or any of the other numerous ways of playing). The only thing that doesn’t really have a lot of depth are the expeditions. There are a handful of places you can visit (and the maps are randomized each time you visit them) but I just wish there were a few more included. There are plans to eventually release a new free one and then do some DLC expeditions but I wish a few more were made available for free (so you don’t have to keep doing the same expeditions over and over again).

Even though there is a lot to do in Renowned Explorers, most games should only take an hour or two to complete the five expeditions you can go on. This might be a bad thing for gamers who don’t like to replay a game after they have technically completed the game. However, most players (including me) will definitely want to revisit Renowned Explorers over and over again, trying out new strategies and combinations. I personally love that you can complete the game in an hour or two but will want to play it again in a couple of days. Also, since Renowned Explorers is a roguelike game (though you can pick discovery mode to get rid of the roguelike elements), it is good that the game can be completed pretty quickly because it keeps deaths from becoming very painful (you will only lose an hour or two of your time instead of an entire night or several days of playing).

I also love that Renowned Explorers gives you the option to play in discovery mode. While I don’t mind roguelikes (as long as your deaths aren’t extremely painful), I know there are a lot of gamers who don’t like them. Giving players the option of the easier discovery mode or the roguelike adventure mode is a great idea. However, I do wish Renowned Explorers came with one more game mode, some sort of career mode where you aren’t limited to just five expeditions and can play as long as you’d like, continuing to grow your exploration team’s legacy. The game provides more than enough content for its $19.99 price tag so this definitely doesn’t hurt the game’s rating but its just something I wish was included.

While Renowned Explorers isn’t the easiest game to get into, once you learn the ropes the game is extremely well designed and very elegant (to borrow a board game term). Once you know what you are doing, the game does a great job of streamlining what could have been a very difficult game to play (the game describes what each thing does very well and the layout is very polished). There are a couple small issues here and there (not being able to see your character’s stats when you get an improvement so you know who would be the best to give it to), but overall the game is very polished from a design standpoint.

While I’m sure some people will disagree with me on this, I personally loved the art style in Renowned Explorers as well. Yes, it kind of looks similar to a mobile game (it has cartoony, almost comic book-like graphics) but considering how many art assets (twenty explorers, over one hundred treasures, tons of different locations to visit on the expeditions, etc.) were needed to make the game, I think it looks great. If you don’t like this kind of art style, you might disagree though. The music is pretty solid but not exactly memorable. While there were a few tracks I would want on my Spotify playlist (if a soundtrack was made available), most of the music is just solid but unspectacular.

Renowned Explorers is a little bit on the pricey side for an indie game (it retails for $19.99) but this is a game that can definitely support the price. While each playthrough will only last an hour or two, this game has so much re-playability that you will easily get enough bang for your buck. The game is very addicting and I would be surprised if you didn’t eventually get 10-20 playthroughs out of it (so at least ten hours and up to forty hours or even more in play time). For achievement hunters, Renowned Explorers comes with 138 achievements to shoot for, many of which are pretty easy to unlock but it will take a lot of playthroughs to get them all. As long as you like this kind of game, Renowned Explorers is easily worth the $19.99 it retails for.

Renowned Explorers is a great game that does pretty much everything right. It offers a ton of depth and re-playability, an interesting combat system, elegant design, and great art. The game successfully combines elements of board games, strategy games, text adventure games, RPGs, and roguelikes. Strategy gamers (especially ones who also like board games, text adventure games, or roguelikes) will especially love it. Renowned Explorers gets an almost perfect four-and-a-half out of five from me and comes highly recommended.