In general I wouldn’t say that I am a huge fan of the shoot ’em up/twin stick shooter genre. I have nothing against the genre but there are quite a few genres that I prefer over twin stick shooters. One of the reasons that I even checked out Assault Android Cactus was the random title. After playing the game I still don’t totally understand the title but it did its’ job by making me take notice of the game. While kind of easy and short, I was pleasantly surprised by how much I enjoyed Assault Android Cactus.

Look At All the Pretty Lights 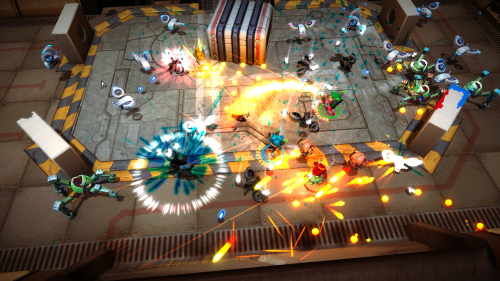 Assault Android Cactus plays like a traditional twin stick shooter. The left analog stick controls movement while the right stick controls the aim of your weapons. The game includes two different weapons. The right trigger is used to fire your normal weapon which you can thankfully hold down for constant firing (your fingers would get really tired otherwise). The left trigger controls each characters’ special weapon. Between uses the special weapon has to be recharged. That is pretty much all there is to the controls. You move around the stages avoiding enemies while using the other analog stick to aim your weapon.

The most unique thing in Assault Android Cactus is that there is no traditional health bar in the game. In Assault Android Catcus when you run out of “health” you are temporarily stunned and have to keep pressing the trigger in order to revive yourself. Instead of worrying about health you need to worry about battery power. Since you play as an android if you run out of power your android shuts down and you lose the level. Your battery power slowly drains so it essentially works like a timer. By killing enemies additional batteries will spawn which refill your energy meter and gives you more time to finish the level.

I really enjoyed this mechanic. The main thing that I have never liked about twin stick shooters/shoot ’em ups is that I always kind of sucked at them. I have always had a hard time avoiding all of the projectiles on the screen when there are hundreds to keep track of. I like this addition to the game since it forces you to focus more on killing enemies than trying to avoid taking damage. This actually allowed me to do well with a genre that I am usually terrible at.

I also appreciated that the game took the time to develop eight unique playable characters that actually play differently. Each character has different primary and secondary weapons. This allows people to play a character that fits their style. Some of the characters are good in short range while others are better at long range. I personally preferred playing the character with the homing missiles since it made it easier to aim while also trying to avoid enemy projectiles. Having so many different characters allows players to experiment with different play styles which adds quite a bit of replay value to the game.

Even though I am not a big fan of the genre, I have to say that I was quite surprised by Assault Android Cactus. I had a lot more fun with the game than I was expecting. If you hate twin stick shooters the game probably won’t change your opinion but if you only had a passing interest in the genre you might have a lot more fun with the game than you would expect. Assault Android Cactus is probably one of the best twin stick shooters that I have played.

I would classify Assault Android Cactus as an easy to moderately difficult game. The normal levels are pretty easy since I only died maybe a handful of times. The reason the normal levels are easy is due to the fact that you don’t have any health. You will usually get another battery to drop before you run out of power so you don’t really have to worry that much about losing. The bosses on the other hand are moderately difficult. The reason they are more challenging is that the battery drops occur every time you defeat a different “section” of the boss fight. This means that you can run out of battery power before you are able to complete the next section of the fight. You will probably die during the boss fights but none of them except for maybe the final boss are frustrating. The final boss is considerably harder than the rest of the game.

Due to the easy difficulty the main storyline is kind of short. The game only has 25 missions and since you will finish quite a few of them on your first attempt the game goes by quicker than you would expect. Despite rarely playing twin stick shooters I was able to finish the game in around four hours. The game does include a challenge mode where you try to survive as many rounds as possible. The game also includes cooperative play so you can enjoy the game with your friends. Even though the game does offer a lot of variety with the different characters, if you don’t like replaying levels you might not get a ton of playtime out of the game.

The graphics in the game are really good. What is most impressive is how well the game runs. At times there will be over a hundred bullets and many enemies on the screen at the same time. While there was some noticeable slowdown at one point (didn’t last very long), the game’s framerate was otherwise pretty good. I have a semi-powerful computer and I was able to have the game set to high graphical settings and encountered only a few issues.

Should You Purchase Assault Android Cactus?

If you dislike twin stick shooters you likely won’t like Assault Android Cactus and I would probably recommend against purchasing the game.

If you are like me who occasionally plays twin stick shooters, I think you will enjoy the game and should pick it up but I would maybe wait for a sale. I actually had a lot more fun with the game than I was expecting. The controls work really well, the graphics are really good, and the game provides quite a bit of variety since there are eight different androids that you can use and each one plays differently. The game is kind of short and a little on the easy side though. While I haven’t played a lot of twin stick shooters, Assault Android Cactus may have been one of the best that I have ever played.

If you like twin stick shooters I think you are going to really like Assault Android Cactus. The game has a lot of variety with the different fighting styles of the different androids. The game also includes additional modes which should bring enjoyment outside of the normal campaign. Twin stick shooters regularly appear on Steam but I think Assault Android Cactus is probably one of the best to have been released on Steam in quite a while.