Eye to Eye is SimplyFun’s take on the classic parlor game “What Were You Thinking” with some twists in the rules to make the game more punishing to players that get answers wrong. The object of the game is to provide three answers to a question and try to match each of them with at least one other player (basically the opposite of Scattegories). Popular answers (that at least one other player chose) keep you safe from losing, while unique answers punish you and move you closer to defeat.

To start Eye to Eye, you are supposed to take all 55 scoring blocks and place them into a pyramid formation in the middle of the table. While this looks pretty cool, it is completely unnecessary and kind of a waste of time. After you build the pyramid (or just throw them in a messy pile in the middle of the table like we did), give each player a pencil, sheet of paper, veto chip, and building tile. Next, figure out who gets to start the game (according to the rules, the player with the most unique eyes starts the game and takes the starting player pawn) and finally, decide whether to play the orange or blue portion of the category cards (it’d be nice if the orange were the easier categories and the blue the harder ones or vice versa but strangely, they don’t seem to have any difference in difficulty).

The game begins with the starting player taking a category card from the box and reading it aloud to the other players. Sample categories in Eye to Eye include “things people lie about,” “lawn ornaments,” “U.S. cities associated with music,” and “things that have a shell.” After the category is read, all players have a few moments to decide whether they want to use their veto chip to veto the category (each player only gets to use a veto once in the game). If a player does decide to veto the category, the starting player takes a new category card from the box and reads it (the other players have the opportunity to veto this category as well if they wish to).

Once a category card has been selected and read that nobody decides to veto, the current player turns over the 30-second sand timer and all players (including the one who read the category) begin writing down answers that correspond to the card. For example, using the “lawn ornaments” category card, possible answers could include “gnome,” “pink flamingo,” “bird bath,” and “lighthouse.” Players may only choose three answers (though the rules don’t state whether you can change an answer you already wrote down or make a long list and then pick the three best answers you come up with, we chose to allow both). 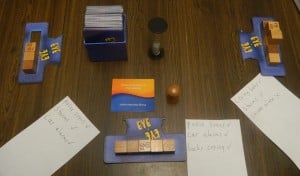 (Click the image for a bigger version so you can see what is going on) This is a sample round of Eye to Eye. The category is “things that prevent you from sleeping.” The players on the left and in the middle matched all three answers while the player on the right missed on one of their answers.

When the timer runs out, everybody must stop writing and it is now time to compare answers. The starting player reads off the three items on their list one by one. If another player (or multiple other players) wrote down the same answer as you, all players with that answer cross it off their lists. If the player announces an item that nobody else has on their list, they take a scoring block from the pyramid and place it on their building tile. If a player has multiple answers that didn’t match anyone, they take that many scoring blocks from the pyramid. Also, if a player couldn’t come up with three answers, any “blank answers” also force them to take scoring blocks for each one. 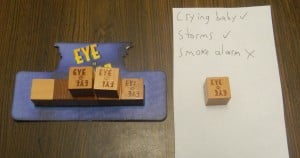 This player had an answer that didn’t match anyone at the table. They take a scoring block and put it onto their own pyramid. If this pyramid becomes complete (it starts with a row of five, than four, three, two, and one blocks), the player will lose.

While Eye to Eye is basically the parlor game What Were You Thinking with a few twists or Scattegories in reverse and thus isn’t particularly original, it is still pretty fun to play. However, the game only varies slightly from the normal What Were You Thinking rules (and in my opinion this game’s rules are actually worse). The addition of the veto chips is nice but you can easily just make them yourself. The rest of the rules are better in the traditional game in my opinion.

First of all, the scoring method is much better. In What Were You Thinking you score a point for each person you matched with (three points for matching three players, etc.) and zero for any unique answers. The lowest scoring player in each round receives a point (which like the scoring blocks is not a good thing). When one player reaches eight points, they are declared the loser and either everybody else or the player with the least amount of points is the winner (depending on the version you play). The two scoring methods are very similar but I prefer What Were You Thinking’s scoring each round separately over Eye to Eye giving you a scoring block for each wrong answer that carries over until the end of the game. In the traditional game, you can have a bad round and not be effectively eliminated (you will just get a point instead). If you are playing Eye to Eye with six players (the max) and you have a bad round where you whiff on all three of your answers, you might be pretty much out of the game.

Also, in What Were You Thinking you can provide up to five different answers versus a strict limit of three in Eye to Eye. I think three is just too few for many of the category cards in the game. You will often have to pass on a very logical answer because you already have three good ones. It is then very possible all the other players use that answer instead of the ones you use and you wind up with a scoring block even though it isn’t completely your fault. Allowing five answers also distinguishes the great players from the good players.

Finally, while Eye to Eye provides 200 category cards (with a total of 400 different questions), the current player is supposed to make up their own category in What Were You Thinking. This could be either a positive or negative depending on your creativity. It is nice to have some pre-made category cards (even though 400 categories isn’t really that many) but it could also be fun to play with your own categories. If you need more cards, SimplyFun also put out an expansion called More Eye to Eye (which includes 650 new categories). If you decide to play What Were You Thinking, it should be relatively easy to come up with your categories but if you can’t you should be able to find a list of possible categories online pretty easily.

Eye to Eye tries to provide a bit more value by including some pretty high quality components. Unfortunately, almost all of them are completely unnecessary and even slightly annoying to use. While the scoring blocks are nice wooden blocks, there just isn’t any reason for them. Instead of making pyramids, you can easily just use a piece of scratch paper to tally the score. The turn indicator is also useless since everybody will know whose turn it is anyway. The veto chips are a nice addition but you can easily make your own. Instead of providing all these pretty much useless components, more category cards would have been nice.

Eye to Eye is somewhat family friendly (unlike a lot of party games the questions are completely tame with no mature content whatsoever). The box recommends ages twelve and up and I’d say that’s about right. However, except for teenagers, children probably won’t be particularly good at the game but they should be able to play it. For children younger than that (as well as children that struggle with some of the questions in the main game), SimplyFun also released Junior Eye to Eye which should have questions more suitable for them.

While Eye to Eye is fun to play and might be worth a purchase if you don’t want to make your own components or category cards (or prefer Eye to Eye’s rules), a big problem is the game’s price. The game retails for $40 and as of this review’s publication date, is even $29 for a used copy on Amazon. That isn’t overly expensive for a board game (I will gladly pay that for really good designer games and I’m very thrifty) but you could just print out the rules for What Were You Thinking and play a similar game for free. It’s hard for a game to compete with free.

Eye to Eye is a pretty solid game but unfortunately, because it is based on a parlor game that can be played with just pencils, papers, and a timer it probably isn’t worth purchasing for most gamers. If you find the game at a thrift store for a cheap price and don’t want to bother making your own categories up, it’s probably worth a purchase. Otherwise, I just recommend trying What Were You Thinking if the concept interests you.