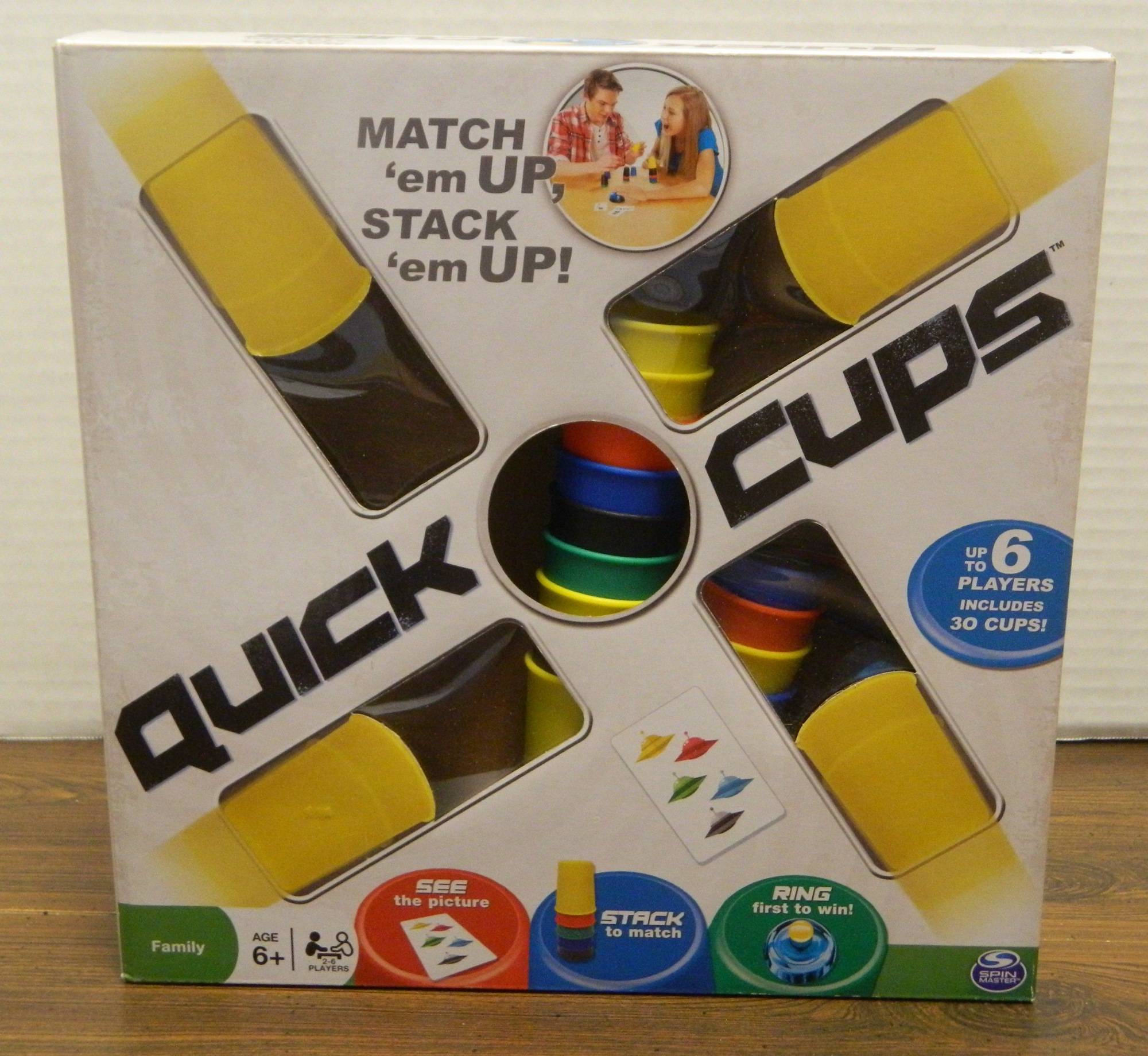 Haim Shafir is a well known children’s board game designer from Israel who has designed a little more than 50 different board games including games like Tutti Frutti/Halli Galli. Today I am looking at one of his more popular board games Quick Cups, more commonly known as Speed Cups. Anyone familiar with Geeky Hobbies, should know that we generally like speed games. We have reviewed enough of them in the past after all. Even though the speed genre has a problem with the games not being highly original, I am always willing to try out a new game from the genre. Quick Cups is far from an original speed game but it still can be a fun experience for the whole family.

How to Play Quick Cups

Each round begins with the current player flipping over the top card from the draw pile. All of the players look at the card. At the same time all of the players try to rearrange their cups to match the shapes on the card. The cups can be arranged in two different ways.

If the shapes are arranged horizontally, the players will place the cups next to each other on the table.

If the shapes on the cards are places on top of one another vertically, the players will place the cups on top of each other.

Each round begins with the next player clockwise flipping over the next card.

The game ends when all of the cards have been played. Each player counts up how many cards they acquired in the game. The player who acquired the most cards wins the game.

My Thoughts on Quick Cups

If it wasn’t already clear, Quick Cups is a pretty straight to the point game. The whole game revolves around quickly looking at a card and rearranging your cups to match the pictures on the card. With how simple the game is, it is not surprising that the game works pretty well as a family game. Quick Cups has a recommended age of 6+ but I think kids younger than six could still potentially play the game. Basically all you need to know to play the game is to recognize the colors and be able to rearrange cups to recreate the picture. The game could be taught to most players within a minute or two, and I can’t really see many people having any issues with playing the game. The only people that might have some issues with the game are people that are color blind as there is no way to tell the cups or shapes on the cards apart other than by color.

With the game being so simple as well as a speed game, it shouldn’t surprise you that the game plays quite quickly. The game only includes 24 cards after all. Once all of the cards are taken, the game ends. This means that most games will probably only take around five minutes. You could play a couple rounds and combine scores from all of the rounds, but Quick Cups is never going to be a long game. With the game being so short, it is the type of game that you play for around 15-20 minutes and then put away for another day.

Quick Cups is similar to quite a few games but the one thing that makes the game kind of unique is that players are forced to stack the cups both vertically and horizontally. There are games that have you arrange items horizontally or vertically but I can’t remember playing a game that has you do both. While this doesn’t sound like much at first, it actually adds a decent amount to the game. The reason this small tweak works is that it makes you think about one more thing before you start assembling. Before you do anything else, you need to figure out whether you will be placing the cups out on the table or on top of one another. This adds a little more thinking to the game which rewards quick thinking skills over just being able to rearrange the cups quickly.

I really liked this mechanic but I think the game could have done more with it. Instead of just playing cups vertically or horizontally, I wish the game included cards that made you do both. For example there should have been cards that forced you to make various pyramid type shapes. This would have added a lot more variety to the cards while also making them more challenging. The most disappointing thing about this is that these type of cards actually appear to have been added to Speed Cups² the sequel to the original Speed Cups. As Speed Cups² was released before Quick Cups, I don’t know why the additional cards couldn’t have been included in the United States version of the game. It is not like Quick Cups couldn’t have used more cards.  I think these cards could have added quite a bit to the game.

While Quick Cups sounds like a really simple game, there is something really satisfying about the game. Like most speed games, it is surprisingly fun being able to quickly arrange your items and ring the bell before the other players. Most rounds will end in 10-15 seconds. The game is simple enough that almost everyone can play it and yet it is still enjoyable for both children and adults. If you have never enjoyed speed games, it probably won’t be for you. People who generally enjoy speed games though will probably get quite a bit of enjoyment out of Quick Cups.

While I liked Quick Cups, the biggest problem that I had with the game is that it is not particularly original. Quick Cups may have a couple unique twists on the formula, but it is never going to be a game that is seen as highly original. I have played a lot of different speed games and quite a few of them are pretty similar to Quick Cups. Quick Cups is on par or better than a lot of them, but there are several speed games that I have played that are better than Quick Cups. One game in particular that is quite similar and better than Quick Cups is Dr. Eureka. Dr. Eureka takes a similar color concept but has players rearrange colored balls between different test tubes to match the current card. I personally think Dr. Eureka is a better game as the mechanic of transferring the marbles between the test tubes is quite original and fun. While I had fun playing Quick Cups, if I had a choice between it and Dr. Eureka I would almost always choose to play Dr. Eureka.

Other than being kind of generic, Quick Cups has a couple other problems that prevent it from being as good as it could have been. One of the biggest problems most people have with the speed genre is that it is one of those genres where one player regularly dominates. That holds true for Quick Cups. The player who is best at pattern recognition and moving their cups around is almost always going to win the game. For example in the games we played, I totally dominated the game. I am generally quite good at speed games and usually either win or come close to first. In Quick Cups I think I ended up getting more cards than all of the other players combined. With how quick the game is, this isn’t as big of issue as it normally would be. It is kind of unsatisfying playing a game though if you know you have little chance of winning the game.

On the component front there are some things that I really liked and some things that I didn’t like. On the positive side I love the card’s artwork. The artwork is well done and actually pretty clever. Instead of just using the same pictures on every card, each card has different artwork. For the vertical cards in particular, the artwork sometimes is just one item with different sections being different colors. This is quite clever and actually forces you to think about how you need to place the cups. In addition the bell works pretty well.

The problems come from the lack of cards and cups. The game includes five different colored cups. This provides a decent amount of challenge but I kind of wish the game would have included two or more additional colors. With more cups the game would have been a little more challenging. The biggest problem though is the lack of cards. The game only includes 24 cards. The game could have easily included a lot more cards. With only 24 cards most games will end in around five minutes. Quick Cups would have been better if the game was longer as it would allow players an opportunity to catch up if they fell behind early.

Should You Buy Quick Cups?

At the end of the day Quick Cups is a fun simple little speed game. The game is simple enough that almost everyone can play it and yet both children and adults can enjoy the game. Quick Cups plays quickly with most games only lasting around five minutes, and you likely will want to play a couple games before putting it away for another day. The addition of having to place cups both horizontally and vertically adds some quick thinking to the game as you have to figure out what you need to do before arranging the cups. While it probably won’t appeal to people who don’t like speed games, Quick Cup is surprisingly satisfying for a speed game. The biggest problem is that Quick Cups is not particularly original. There are quite a few speed games that are very similar to Quick Cups. In my opinion games like Dr. Eureka are better than Quick Cups. The game also has a problem with some players being considerably better at the game than others. Finally the game could have benefited from having more cups and cards.

If you have never really cared for speed games, Quick Cups is not going to be for you. People who already have a game similar to Quick Cups, may not find it worth picking up Quick Cups as well. If you can find Quick Cups for a good price though, it is probably worth picking up as you should enjoy your time with the game.

If you would like to purchase Quick Cups, you can find it online: Amazon