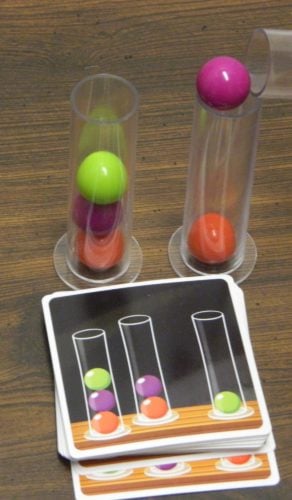 To match the challenge card the player is moving a purple ball from the far right test tube into the center test tube.

When a player thinks they have all of the balls in the correct combination and in the right order they yell out “Eureka!”. If the player was correct they take the challenge card which is worth one point. If the player is incorrect, they are eliminated from the current round and have to wait for the next challenge card to be flipped over. The remaining players then try to complete the challenge.  A new round begins with the next challenge card being flipped over. Players leave the balls in their current test tubes between rounds. 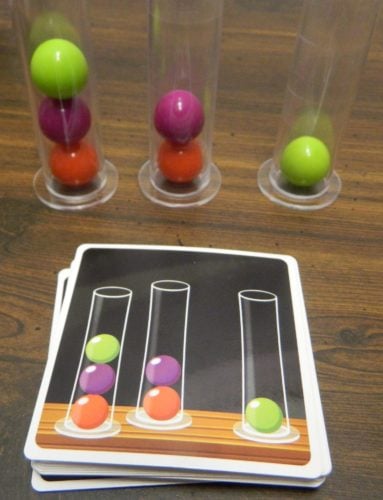 To match the picture on the card players can flip over the test tubes or can rearrange the order of their test tubes. 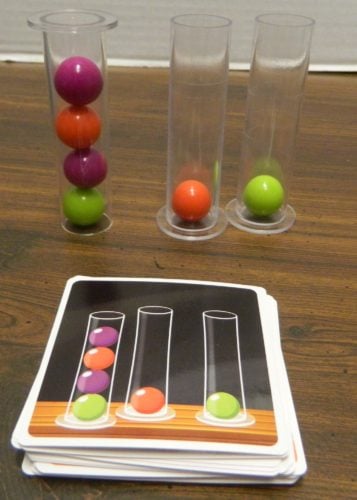 This player has completed a challenge by flipping over one of the test tubes.

The first player to get five challenge cards wins the game.

This player has earned five challenge cards and has won the game.

Expert Mode: Players have to hold all three test tubes in their hands at the same time and can only put them down when they have completed a challenge.

Puzzle Mode: Players decide how many moves they think it will take to recreate the challenge card. The player who says the lowest number gets to prove it to the other players. If they are correct they get to take the card. If they are wrong the player with the next lowest bid gets to prove their solution and so on.

If you were walking by Dr. Eureka in a store the first thing that would probably pop into your head would be “Children’s Game”. From the cute cartoon artwork to the science based dexterity gameplay, you would think that Dr. Eureka would be a game made for children. You would be right to a degree. While Dr. Eureka is a good children’s/family game, it is also a surprisingly deep and fun game for people of all ages.

When I first heard about Dr. Eureka I was intrigued by the game because it sounded like no other game I had played before. With so many games made every year, originality is a very important quality for a board game. I would classify Dr. Eureka as a speed dexterity puzzle game. The object of the game is to move the different colored balls between the different test tubes in order to match the current challenge card. This might sound easy enough but you can’t touch the balls with your hands so you need to pour the balls from one test tube into another in order to rearrange them. It becomes a puzzle as you try to figure out how to move the balls between the test tubes to get them in the right order. On top of all that the game is a speed game since you are competing against the other players in order to finish first.

Being a children’s game is generally not a good sign for adults since most children’s games aren’t particularly interesting for adults. That is not the case with Dr. Eureka though. Kids should have a blast with the game but adults can really enjoy the game as well. I played the game with three other adults (no kids) and we still really enjoyed the game. The game’s mechanics are simple but still enjoyable enough that it is hard not to have fun with the game.

The game has a recommended age of 8+ and I feel that is right. The rules are very easy but younger children will probably struggle with figuring out how to utilize the three different test tubes in order to move the balls around. Some adults that struggle with these type of puzzles could even have some issues with the game. While most people are going to pretty adequately matched, Dr. Eureka is the type of game that some players are going to have an advantage in. If you are playing with a player that is really good at these type of puzzles, they will usually win the game. I think children can be competitive with adults in the game but I would think adults would generally win the game unless the adults gave the children an advantage in some way.

The thing I liked most about Dr. Eureka is the puzzle aspect of trying to figure how to rearrange the balls between the different test tubes. While it seems really simple, there is a decent amount of strategy to the whole process. You need to plan out what you are going to do for each challenge since if you just randomly start moving the balls between the tubes you can make the situation even worse. The game is not a brain burner but still makes you think.

Personally I really liked the idea of being able to flip over the test tubes when finishing a challenge since it adds another element to the game. Sometimes it is hard remembering that you can build in either direction in a test tube since you can always flip it over. If the game didn’t have this mechanic you could end up wasting a bunch of time just reversing the order of the balls in a test tube. While it seems pretty simple, the addition of being able to flip over test tubes can really impact the game. Since it is kind of hard to flip over the test tubes without having the balls fall out, you kind of have to be lenient on the no touching the balls policy when flipping over test tubes.

I find it interesting that you don’t reset the test tubes between challenge cards. This means that all of the players will be attacking the challenge from a different situation. Players will sometimes have a big advantage for a challenge card because they start in a position that is closer to the correct answer than the other players. This feels a little unfair but it doesn’t become too big of an issue. It was weird that my group twice encountered a situation where two cards that where exactly the same except for the order of the test tubes were drawn consecutively which meant the same player would easily win two rounds in a row. We decided that if a player could win a round without actually moving any balls, that card would be placed back into the deck and no one would score the point for it.

While it does give some players an advantage in the game, I think the game had to use this mechanic for a couple reasons. First it would have wasted so much time having to reset your test tubes after every challenge card. Playing the game in this way you can quickly move from one card to another without having to reset the test tubes. This also adds more replay value to the game since you will regularly be approaching each challenge card with a different initial setup. If you reset before each card you would just keep playing the same puzzles over and over again.

Length wise there are things I like and dislike about Dr. Eureka. A game of Dr. Eureka probably takes five to fifteen minutes. It is the type of game where you can quickly get through many games. Since the number of cards needed to win the game is the only determining factor of the game’s length, if you want a longer game you can just increase the number of cards you need to win the game.

The problem I have with the length is that while really fun, Dr. Eureka is not the type of game that you will play for hours at a time. I would say that I played the game for about 30-45 minutes the first time I played the game. That seems about right for Dr. Eureka. You will want to play several games in a sitting but I don’t really see sitting down and playing the game for an hour or more at a time. I plan on playing the game for only 20-30 minutes at a time but bringing it out pretty regularly.

In addition to playing the main game, I also tried out the two main variant rules included with the game.

The expert mode is an interesting addition since it does make the game more difficult. I wouldn’t say that it makes the game drastically more difficult but it adds a challenge since it becomes harder to move balls between tubes when you are fiddling with another tube. It is also harder to see what balls are in each tube which slows down the players.

The puzzle mode is the more interesting addition. While the gameplay is basically the same, it feels quite a bit different than the main game. In the main game speed is key since you have to think out what to do but doing it quickly is even more important. In the puzzle mode the only thing that matters is how clever you are figuring out the most efficient path of how to move the balls around. People that love the idea behind the game but don’t really care for speed games should really like this mode. I personally will mostly play the main game but I plan on playing the puzzle mode every so often.

While it might look like a children’s game, Dr. Eureka is so much more. The game is quite a bit of fun for children as well as adults. The game does a great job combining speed, dexterity, and puzzle games to create a truly unique board game experience. I don’t think I have every played a board game exactly like Dr. Eureka. Dr. Eureka is just a fun game that is quite simple but makes you think at the same time. The only complaints I have with the game is that it is not the type of game that you will want to play for hours at a time and sometimes players will get an unfair advantage on a given challenge.

If you would like to purchase Dr. Eureka you can purchase it on Amazon here