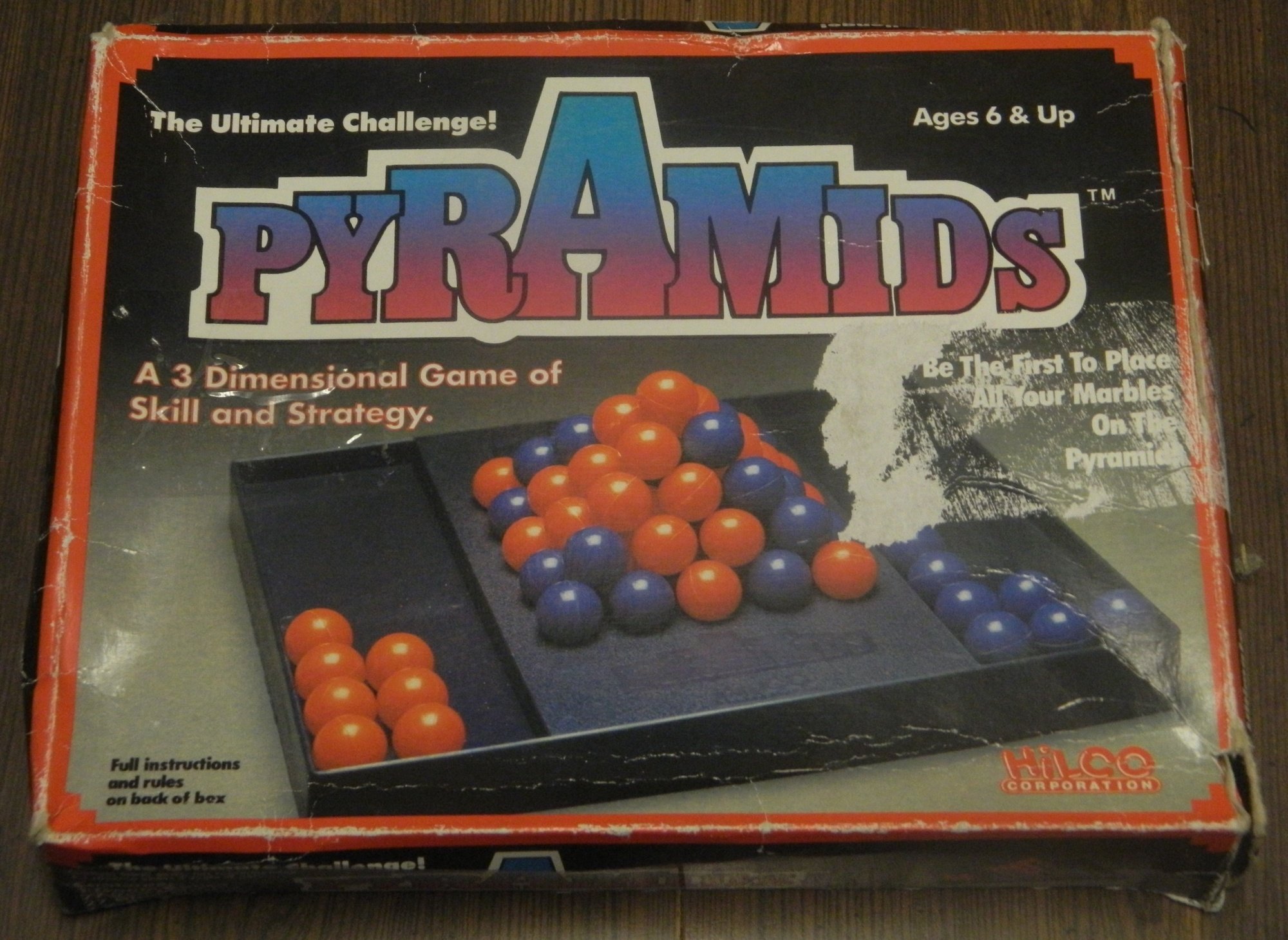 In Pyramids the object of the game is to be the first person to place all of their marbles on the gameboard.

Before the game begins the players place the yellow marble in the center of the gameboard. Players then take turns playing one of their marbles onto the gameboard. Whenever four marbles are placed together forming a square, the players check to see if at least three of the marbles are the same color. If there are, the player whose color controls at least three of the marbles gets to place one of their marbles on top of the four marbles (this does not count as their turn). If placing the extra marble creates a another group of four marbles, that group is checked to see if an extra marble needs to be placed.

The reason I was surprised by the game is that it is quite easy to pick up but also has quite a bit of strategy to it as well. It takes around one to two minutes to learn how to play the game. The game is easy to learn but quite a bit harder to master. If you don’t properly think out your strategy and your opponent does, you will not win the game. Luck will rarely impact the outcome of the game. Marble placement is key since the only way to win the game is to get more free placements than your opponent. You need to always pay attention to the position of all of the other marbles since you need to set up opportunities for free marbles while also preventing your opponent from getting free marbles.

While getting groups of three is ultimately how you win the game, you can’t just focus on that though. If you are too focused on getting groups of three, your opponent is doing the same thing while also having the ability to get control of the board. In one of the games I played, I ended up neglecting the other side of the board and I eventually got to the point where all of my groups of three were used up and I had to play on the other side of the board which didn’t help me get any additional free placements and actually helped my opponent complete their groups and get free marble placements. I ended up losing that game.

If that wasn’t enough, you also need to think about the different layers of the pyramid. You probably think that you should start slow and try to gain as much of the lowest level as possible since each group of three will get you a free placement which will lead to you getting another free placement on the next level. You can’t focus only on the lowest level though since you can’t let the other player get control of the higher levels. If they get too much control they can pretty much set up the board so you are unable to gain any free placements at the end of the game.

If I had to compare Pyramids to another game, I would say the closest comparison I can think of is Connect Four. The game is still quite a bit different but the mechanics are pretty similar. In both games the object of the game is to place your pieces in order to set up future moves that will win the game for you. Pyramids is a more strategic game in my opinion though since you need to think in three dimensions instead of the two dimensions in Connect Four.

I have been quite complimentary of Pyramids and it is deserved. Pyramids is a very good and underrated game in my opinion. The game does have some problems though. Towards the middle of the game there are quite a few different moves that can be made. For people that really like to think out their next move, this could lead to analysis paralysis. If you or the person you play against like to analyze every potential move, I could see the game lasting a lot longer than it should.

Pyramids is also not the type of game that you would play for hours at a time. Pyramids is the type of game where you might play a couple games at a time and then put the game away for a while. I think the game does have lasting power though since there are so many different ways that a game could be played that you will rarely have the same game twice.

Overall I was very satisfied and surprised with Pyramids. It is a great pick up and play game but it also contains quite a bit of strategy if you want to play it that way. If you don’t like abstract strategy games or the game doesn’t sound interesting to you, I don’t think it will change your mind. If you like games like Connect Four, I don’t think you can go wrong with Pyramids. Unfortunately the game appears to be uncommon/rare since I could find very few listed for sale when I wrote this review and there is little information about the game. If you do run into a copy of the game though, I would recommend giving it a shot.