Created in 1978 the game Simon was quite popular in the 1970s and 1980s. For those of you who have never played Simon before, Simon is an electronic memory game where the objective is to follow a pattern of sounds/colors created by the computer and repeat the pattern back by pressing the corresponding colored buttons. Seeing how popular Simon was, Milton Bradley decided to cash in on the electronic memory game fad by releasing Plus One two years later in 1980. While the two games are not exactly the same, they do share quite a bit in common. Plus One is a decent electronic memory game but you are probably better off just sticking with Simon.

How to Play Plus One

Insert batteries into the game unit and turn it on. Place the game unit on any space of the game board. Choose which player will make the first move.

On the first player’s turn they will flip over the game unit in one direction to an adjacent space. Play then moves onto the next player. 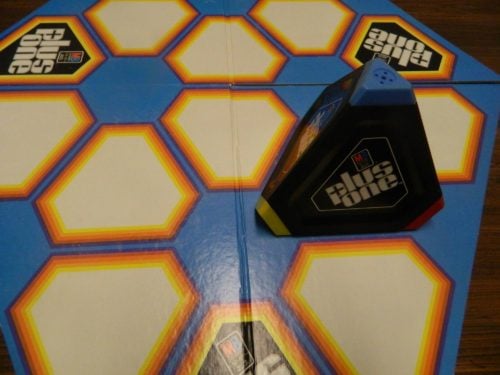 The first player chose to flip the unit down and to the right. 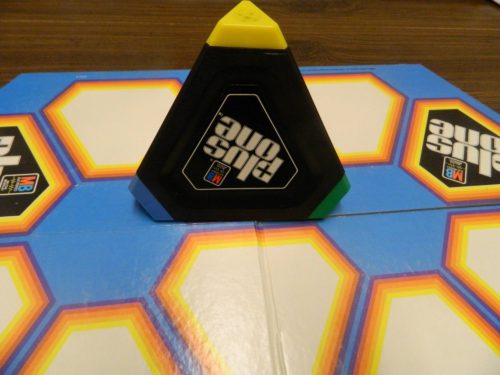 When a player makes a mistake repeating the pattern or takes too long to make a move, the game unit will make a noise. The player who made the mistake is eliminated from the game. If there are more than two players, the game is reset. The game is played until there is only one player remaining. The last player remaining wins the game.

My Thoughts on Plus One

I started off the review talking about Simon which is relevant since when you get down to it Plus One owes a lot to Simon. Plus One takes the electronic memory aspect of Simon and adds a gameboard and spatial memory aspect to the game. Otherwise Plus One is basically the exact same game as Simon. The game includes musical tones for each side and the four corners of the game unit even use the same colors as the original Simon game. While it is not officially part of the Simon line of games, I honestly think it should have been called Simon Plus One.

Since the game shares so much in common with Simon I might as well quickly share some of my thoughts on Simon/electronic memory games. I really wouldn’t say that I have strong feelings either way about the game. It is a fun quick little game that does a pretty good job as a memory game. Simon is the type of game that I would play every so often but for only about 10-20 minutes at a time to avoid it becoming repetitive. I see Simon as more of a distraction than anything else. As you probably already have your own opinion of Simon let’s get to what is unique about Plus One.

The biggest addition for Plus One is the idea of adding a spatial mechanic to the game. In Simon you just have to remember the order of colors/sounds so you can press the buttons in the right order. Plus One adds an additional mechanic of remembering the order of how the game unit was turned. If you don’t use the gameboard this mechanic doesn’t add much. If you use the gameboard though it adds another way that players can remember the pattern. I always like when games give players more options so I like what this mechanic was trying to accomplish.

The problem with the spatial mechanic though is that it forces each player to repeat the previous player’s pattern in reverse. Instead of resetting the game unit to the starting spot after each move, each player has to reverse what the previous player did before adding their own move onto the end of the sequence. While this does add some challenge to the game I think I would have preferred that the game let you reset the unit after each move so you wouldn’t have to remember the pattern forward and backwards. If you like Simon  but wish it was more challenging you might really like this addition.

While having to reverse the previous moves adds a little complexity to the game, I wouldn’t consider Plus One to be a very difficult game to play. Basically Plus One is a very similar to Simon in this way. You just have to remember and repeat a pattern so the learning curve is quite short. While Plus One is easy to play I do think the designer was a little optimistic about how well players would do in the game. Apparently the game can save up to 52 moves so if the players can repeat a pattern of 52 moves everyone wins. I don’t see this really being a problem because outside of cheating I don’t see many people being able to perfectly remember a 52 move pattern. I think most players won’t get much further than 20 or so moves.

When talking about components for Plus One there isn’t much to talk about. All you get is the game unit and the gameboard. The game unit is solid but your mileage may vary based on condition. Being a game that is almost forty years old you have to give the game quite a bit of credit that it still works. Wear and tear over the years will impact the game though. The copy of the game that I found had quite a bit of wear and tear. The game unit works but occasionally it will shut off if the unit is flipped over too hard. The biggest complaint I probably have with the components is directed towards space conscious people. The box for Plus One is surprisingly large especially when you consider that all the game includes is the game unit, gameboard and the instructions. I think Milton Bradley could have pretty easily made a smaller box for the game.

While Plus One is pretty similar to Simon I do have to give the game credit for doing a slightly better job as a multiplayer game. In Simon there are modes where the players take turns repeating the pattern and adding a color of their choice to the end of the pattern. Plus One is played in basically the same manner. The main reason why I think Plus One does a better job with multiplayer is that it is easier to move the game unit around the table than passing the Simon unit between players.

While the two games are very similar I personally think Simon is a slightly better game. While Plus One offers more of a challenge, most of the additions to the game just feel unnecessary. It is just easier pressing the buttons in Simon then wasting time flipping the game unit around in Plus One. Simon is more to the point where you can just focus on the pattern rather than wasting time on mechanics that don’t really add anything to the game. On top of it all Simon takes up a lot less room.

Should You Buy Plus One?

It is kind of hard to judge Plus One on its’ own. Basically Plus One is Simon with a couple tweaks thrown in that don’t impact the game a lot. Just like with Simon, Plus One is an electronic memory game where you have to repeat the pattern. The two main differences are that in Plus One you have to flip over the unit instead of pressing buttons and that you have to reverse the pattern each round instead of repeating it from the start each time. While I would have preferred repeating the pattern normally, I will admit having to reverse the pattern each round adds more challenge to the game. Otherwise there really isn’t much of a difference between the two games. I personally would say that I slightly prefer Simon.

Basically your enjoyment of Plus One is going to depend on whether you like electronic memory games like Simon. If you don’t really care for them I don’t see a reason why Plus One will change your opinion. If you already own a Simon I don’t know if Plus One is unique enough to warrant owning both games. If you really like Simon though and want a little more challenge it may be worth looking at Plus One.

If you would like to purchase Plus One you can find it online: Amazon