Released in 2000 by Hasbro, Moods is a board game built around an interesting concept. Would you be able to guess someone’s mood just by listening to them talk? Well Moods tests that by having players guess moods based off of players reading phrases that have nothing to do with the mood they are portraying. Moods has an interesting concept but it didn’t sell particularly well since it seems to have never been reprinted after its’ initial run. So is Moods a hidden gem or a game that should be lost to time? While it is not going to be for everyone, with the right groups Moods will be a party game gem.

How to Play Moods 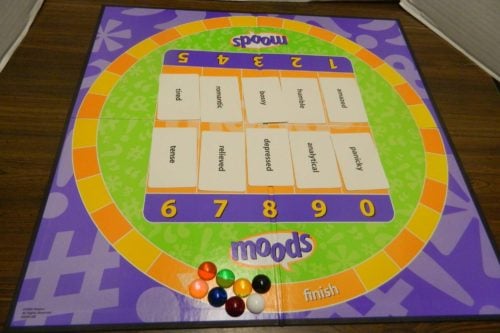 A player starts their turn by rolling the die and using the dice cup to cover up what number was rolled. The player looks at the card on the space corresponding to the number they rolled. This is the mood that the player will portray on their turn. The player will draw a phrase card from the box and they will have to read that phrase in the mood they have to portray for the round. While reading the phrase a person can only use facial expressions and the way they say the phrase to indicate their mood. Players are not allowed to use their arms or other actions to indicate their mood. A player has the opportunity to say the phrase up to two times. 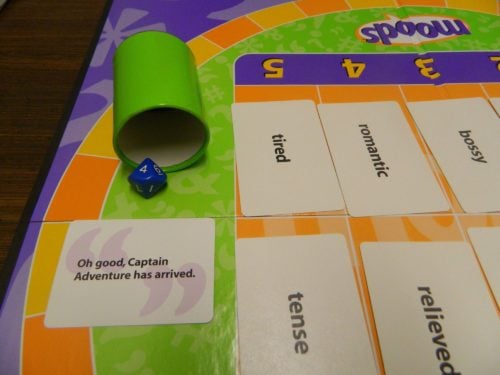 The current player has rolled a four so they have to say “Oh good, Captain Adventure has arrived.” in a romantic way.

Once the player has said the phrase, all of the other players have to guess what mood they were portraying. They choose one of their betting chips for the round. When everyone is ready all of the players place their chips face down on the card that matches the mood they think the player was portraying. 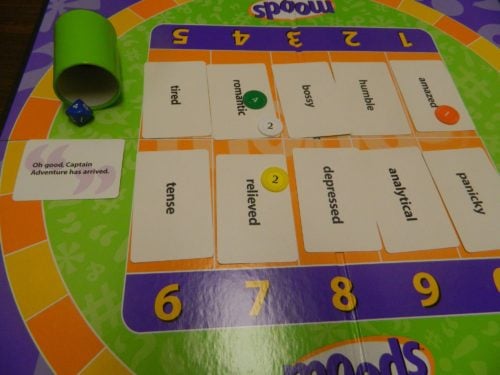 After everyone has moved the corresponding number of spaces, each mood card that had at least one chip played on it are replaced with a new mood card. All chips used in the round are set to the side of the board. These chips can’t be used again until a player has used all four of their chips. Once a player has used all four chips they take their chips back into their hand. Play then passes to the left with the next player portraying a different mood. 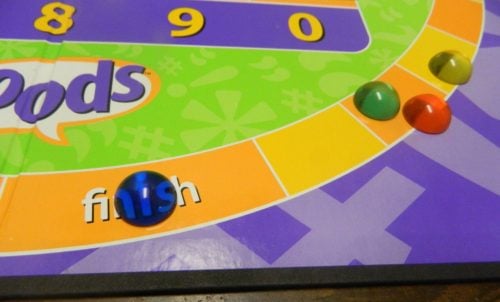 The blue player has reached the finish line so they have won the game.

My Thoughts on Moods

The best way to classify Moods is probably as an acting party game. Like Charades, Moods tests your acting skills. Instead of using body movements though you need to use your voice and facial expressions to express different moods to the other players. To “help” you with portraying your mood, the game forces you to read a phrase that rarely ever fits the mood you are given and often works contrary to it. I have played quite a few different party games and yet I don’t remember any that have played quite like Moods. The game is not going to appeal to everyone but with the right group you can have a blast with Moods.

While some rounds can be kind of dull/boring, if you get the right combination of cards Moods can be hilarious. Most of the laughs in the game come from the round’s mood and phrase being completely opposite of each other. For example a player saying an exciting phrase in a sad tone. Whenever the romantic card comes into play you are almost guaranteed to get some laughs. The romantic card works so well as it usually leads to awkward situations or downright hilarious moments as you try to say something ridiculous in a romantic manner. As long as you don’t mind occasionally looking like a fool you can have a lot of fun with Moods.

One thing I am a little curious about is why the game lists the age recommendation as for adults only . None of the cards have anything particularly offensive in them. The game can be played in a dirty way especially with the cards like romantic but the players can easily agree not to play the game in a dirty way. You could also easily remove the romantic and other similar cards from the game and the potential issue would be eliminated. While I don’t think young children would be able to play the game, I see older children and teenagers having no problems with the game. Basically all you need are decent reading and acting skills. I don’t really get the adult recommendation since I think Moods is a game the whole family could enjoy.

Moods may be easy to play but that doesn’t mean that everyone will be good at the game. While you don’t have to be a great actor to do well in the game, you need some acting ability. If you aren’t good at displaying different emotions you are going to have trouble when it is your turn to be the actor. I was actually a little surprised by the amount of acting skill required to do well in the game. While some of the moods are really easy to portray, other moods can be quite difficult. Add in that you could have two or more similar moods out at the same time. If you are not a great actor you are going to have to hope that you get a mood that is easy to portray.

As far as length Moods does a pretty good job. Most games should last around 20-30 minutes. The length is not too bad but I think the game would have benefited from being a little longer. With how short the gameboard is, it can sometimes feel like the game ends as soon as it begins. I think Moods’ would benefit from a 30-45 minute playtime.

I don’t know what to think about the scoring system in Moods. In games with three or four players the scoring does seem to be a little unfair for the player reading the card. The player can do a really good job and yet could score less than the other players if they used one of their high chips. With more players though the scoring system works pretty well since a player that does a good job acting will get the most points in the round.

As far as the voting chips I both like and don’t like them. I like that they add a risk/reward element to the game since you need to choose the best time to use your high value chips. I don’t like them since you might get stuck using one of your high value chips in a round where a player has no idea how to portray the mood. Then you basically have to risk your highest valued chip on a guess. While you can leave your low chips for people who aren’t good at acting, you never know when a situation where a player can’t act out a particular mood will come up.

As far as the components are concerned I think Moods does a pretty good job. The game includes a satisfactory number of cards. I wish there could be more mood cards but with 60 different moods I think the designers would have had a hard time coming up with many more. 120 phrase cards is plenty for the game since repeating phrases is not that big of deal. You could also easily make your own phrase cards to add to the game. I would actually recommend doing this as you can add your own favorite movie quotes or even inside jokes to the game. Otherwise the quality of the components are basically what you would expect from a Hasbro game. The component quality is very solid but not spectacular.

While Moods can be a fun party game, your enjoyment of the game will definitely depend on the group of people you play it with. Moods is a silly game and relies on players being outgoing and willing to make a fool of themselves. If this describes yourself and your group, you will probably love the game. There will be problems though if your group has a lot of shy and/or serious people. If the majority of the players can’t get into the right mood, the game is likely to suffer.

This is the main reason that I think people’s opinions of the game are going to differ significantly. If you are shy or serious you likely will hate Moods. If you and your group are full of outgoing people you will probably love the game. Personally I would consider myself to be somewhere in the middle which is reflected in my review of the game. I wouldn’t really consider it to be my type of game but I was still able to appreciate it for what it is. People who are really outgoing can probably add at least one star to the rating I gave Moods. Extremely shy or serious people should probably take at least one star off the rating.

Should You Buy Moods?

Moods is a game that people will have wildly different opinions of. If you are a shy or serious person you will probably hate the game since it requires decent acting skills and will make you look silly quite often. Outgoing people are probably going to love Moods though. The game is quite original for a party game since I haven’t seen another party game quite like it. Moods is quick to learn and play. While every round might not be great, there is plenty of opportunity for laughs in the game.

If you are shy or really serious the game will not be for you. If Mood’s premise intrigues you though I think you will really enjoy the game.

If you would like to purchase Moods you can find it online: Amazon