One genre of board games that I have always enjoyed is the party game. While party games rarely ever have a lot of strategy, there is just something enjoyable about a game that you can quickly pick up and play with people who play a lot or very few board games. Today I am looking at Pluckin’ Pairs a board game where players need to try to find connections between items that at first glance appear to have nothing in common. While it is not perfect, Pluckin’ Pairs is a very solid, fun, accessible party game.

How to Play Pluckin’ Pairs

Once the timer has been flipped over, all of the players have 90 seconds to put the cards on the table into five pairs. Players can pair two cards using any reasoning that they can come up with. Each card can only be paired with one other card though. Each player writes their pairs on their answer sheet. When a player has made their five pairs they will have one card that was left unmatched which the player writes down as their “bad apple”. 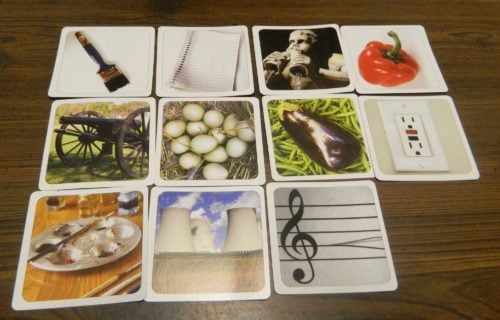 For this set of cards some possible pairs include: the nuclear reactor and electrical outlet since both deal with electricity, the two paint brushes since they can be used to paint, and the cannon and sheet music since both can lead to sounds being made.

Once all of the players have finished or time has run out, the round ends and scoring begins.

As far as scoring the bad apple choices you have two options. You can have the bad apples score zero points. Otherwise you could give two points for every matched bad apple.

After five rounds have been completed the game ends. Players total the scores from all of their rounds. Whichever player has the most points after five rounds wins the game.

My Thoughts on Pluckin’ Pairs

While Pluckin’ Pairs shares elements with quite a few other party games, it still feels like a unique experience. Basically Pluckin’ Pairs is the perfect type of party game. It takes minutes to learn and only takes 20-30 minutes to finish the game. Pluckin’ Pairs recommends three to eight players but I don’t see any reason that you couldn’t play the game with as many people as you want. The only additional time that more players would add would be the amount of time it would take to go through their answers. Basically Pluckin’ Pairs is the type of game that you can bring out for a party with people that rarely if ever play board games and they can still enjoy it.

If I had to compare Pluckin’ Pairs to another game, it reminds me a lot of Compatibility. In Compatibility players play in teams and try to choose the same image cards that best represent the word card that was chosen for that round. While Pluckin’ Pairs doesn’t have teams, the objective of trying to match the other players’ choices is very similar between the two games.

While Pluckin’ Pairs is the type of game that anyone can play, some people seem to be better at the game than other people. Players that can think abstractly about the objects seem to do better since they do a better job of coming up with connections between two items that don’t seem to share anything in common. If two or more players are thinking similarily, those two players will have a big advantage in the game since they will help each other out. Basically the goal in Pluckin’ Pairs is not necessarily coming up with the best answers but coming up with the most popular answers.

While it doesn’t happen a lot, one of the best parts of Pluckin’ Pairs is hearing the strange connections some of the other players came up with. Unless it was just my group, I would say that most pairs are created using logical connections. There are the occasional pairs that are really puzzling though. It is entertaining to see people try to justify these pairings. If you play with people that think quite a bit differently than you, it is interesting to see the connections that they make that you never would have thought of.

Probably the biggest problem that I had with Pluckin’ Pairs is an issue that is kind of unavoidable. With a game that involves drawing random cards, there will be times when there are no connections between some of the items. For about half of the rounds you can come up with a decent reason to pair up all of the cards. The other half of the rounds will involve one or two pairs which you randomly have to make because the rest of the cards don’t pair up well. This was inevitable since you are never going to be able to draw cards that always work well together. It hurts the game when this happens though since you basically need to hope you make the same random pairs as another player. How well you do with these random guesses could end up making a difference in who wins the game.

The other problem with Pluckin’ Pairs is the fact that it is surprisingly hard to remember which cards you have already used when you make pairs. It seems that every player ends up using a card twice in a round at least once during a game. The question is whether the player notices before the round ends and is able to change it in time. I think the reason it is so hard to keep track of the cards is that there is no order to how the cards are placed out on the table. I think Pluckin’ Pairs would have really benefited from having a board with spaces labeled 1-11 and one card being placed on each space. This way players could use the numbers to indicate their pairs which would save time and make it easier for you to see if you used the same card twice.

Other than not including a board to organize the cards for a round, I thought the contents for Pluckin’ Pairs were pretty good. The cards are pretty typical for a party game but the game comes with quite a few of them and they are nice. You will have to repeat cards quite often if you play the game a lot but the chances of you ever having the same set of cards for a round is pretty unlikely. The one component I don’t like were the answer sheets. I don’t know why the sheets couldn’t have been designed in a way that each player needed only one sheet for a whole game. Since each side can only be used once (unless you erase between rounds), each player will use two and a half sheets for each game. That is wasteful in my opinion and I worry that the game’s sheets could run out quickly. Otherwise the contents are pretty nice even though the game’s box could have been a little smaller.

Should You Buy Pluckin’ Pairs?

Pluckin’ Pairs is a well rounded fun little party game. While the game has little strategy and a decent amount of luck, it is a fun game if you don’t take it seriously. It works well as a party game since it is easy to learn and can support as many players as you want. Basically Pluckin’ Pairs is the type of game to play if you want something quick that you don’t have to put a lot of thought into. The game does have a couple issues with drawing cards that don’t work well together and it is hard to remember which cards you have already matched in a round but it is just a very solid game overall.

If you are not a big fan of party games where players are trying to match one another, Pluckin’ Pairs is probably not going to be the game for you. If you are looking for a light, quick and fun little game that you don’t have to put a lot of thought into though I think you will enjoy Pluckin’ Pairs.

If you would like to purchase Pluckin’ Pairs you can find it online: Amazon