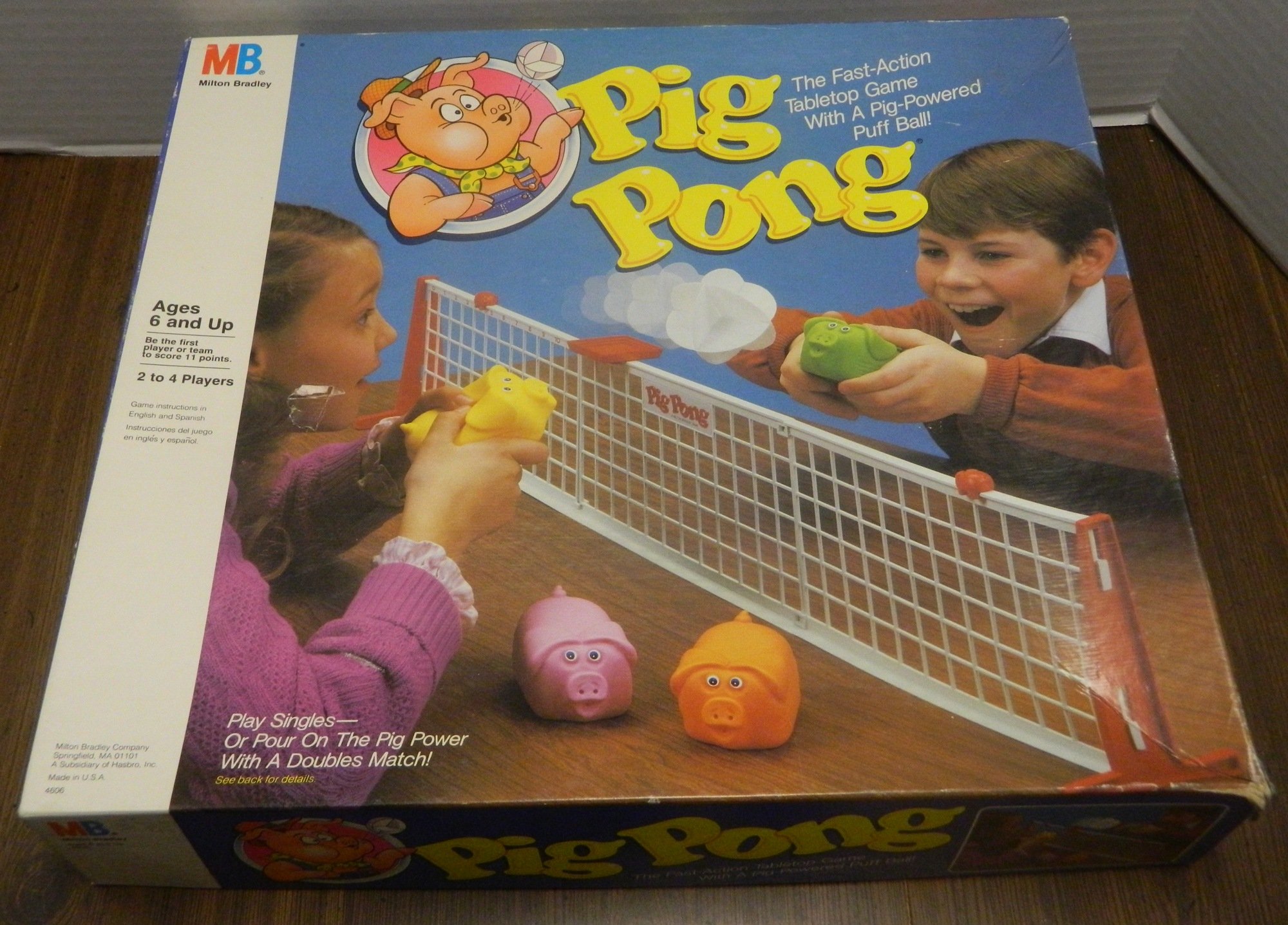 The game can with be played singles or doubles. In a doubles game two players sit on each side of the net.

The following are fouls in the game of Pig Pong:

When a foul is committed the ball is put back on the trough and no one scores a point.

The game continues until a player or team scores 11 points. That player/team is the winner.

Growing up in the early 1990’s I was exposed to quite a few classic children’s games. I don’t know if it is just me but the 1980’s/early 1990’s had quite a few original/creative children’s games. Of these games some have held up better than others. As a child I never played Pig Pong so I unfortunately have no reference point in order to determine if the game has held up or not. As an adult though I have to say that the game is actually a lot more enjoyable than I was expecting given that the game is clearly a children’s game.

Pig Pong is obviously not for everyone. To fully enjoy Pig Pong you have to be in the right mood. If you are a serious gamer that doesn’t like playing wacky/gimmicky children’s games you will not enjoy Pig Pong. Pig Pong is not a game to be taken seriously. There is essentially no strategy to the game. If you take the game too seriously you will just see the flaws in the games and miss the enjoyment you can get out of such a simple game.

If you are willing to sit back and appreciate the game for what it is though, I think you could actually have quite a bit of fun with Pig Pong. Pig Pong is a classic example of a 1980’s/1990’s weird childrens’ board game genre. Essentially in Pig Pong you are playing ping pong (with simplified rules). You use a pig that when you squeeze it will let out a puff of air. The game uses a light puff ball that can be pushed by the puff of air that comes out of the pigs. You try to “hit” the ball back and forth trying to make the ball fall to the ground on your opponents’ side of the net.

I think Pig Pong would be a great game for children. I didn’t play the game with any children but the game is simple enough for children to understand while also having enough action that children won’t get bored. While Pig Pong is obviously gauged toward children, adults can still have fun with the game. I had fun playing the game. If you like Ping Pong you should like Pig Pong. It is simpler than Ping Pong but it still has the same back and forth gameplay which makes Ping Pong enjoyable. Pig Pong actually might stress the back and forth even more since when the ball is near the net both teams have their pigs lined up so they can quickly push the ball back if it goes onto their side of the net.

Pig Pong is simplistic but it does have decent replay value. It is not the type of game I would play for hours at a time but I see it as the type of game that I could play for a short time every so often like Ping Pong. One thing that made the game more enjoyable was to add additional house rules to the game. One thing my group liked trying to do was to try and “spike” the ball by trying to shoot the ball straight down towards the table. Why don’t we just say that it didn’t work very well. When a player tried to spike the ball it usually resulted in the player whiffing entirely or blowing the ball down on their own side of the net. In addition our group tried a singles version of the game where the players both got two pigs to control.

Overall the game is fun but I was a little disappointed by the quality of the components. The balls tend to not stay together like they are supposed to. This is a problem since in order to get the balls to fly well they need to be set up in a certain way. At least with the balls that came with my copy of the game, the balls stayed together properly for two or so points before they had to be readjusted. The balls are also quite thin which is necessary in order to fly but this makes them pretty susceptible to getting damaged. I could easily see the balls tearing. The balls could also get lost pretty easily and I don’t know how easy they would be to replace. The plastic pigs are made of a pretty thick plastic but due to the nature of the game they could wear out pretty quickly. Finally I think the box is too large for what comes with the game. The game comes in a large square box so it takes up quite a bit of space. I think the box could have been at least 25-50% smaller.

Overall Pig Pong is one of those children’s games that can also be enjoyed by parents. Kids will obviously enjoy the game more and I think younger children will really like the game. If you are the serious type of gamer that doesn’t like these types of gimmicky games, you won’t like Pig Pong. If you are a “child at heart” and on occasion like playing these gimmicky children’s games you should enjoy Pig Pong.

Bounce-Off Board Game Review and Rules

One thought on “Pig Pong Board Game Review”