To begin the game two barter cards are randomly selected for the game. All of the merchandise cards are then shuffled and separated into four even stacks (two stacks of 14 and two stacks of 13). The top card of each stack is flipped face up. All of the players roll the die and the first to get a star gets to go first. On every players’ first turn they must roll the die and take a jewel of the color they rolled. If they roll a star they get to pick any color they would like.

After every player has taken their first turn, all players are given a choice of what they would like to do on their turn.

The players’ first option is to roll the die and take a jewel of the corresponding color. If a star is rolled the player can pick any color they want. 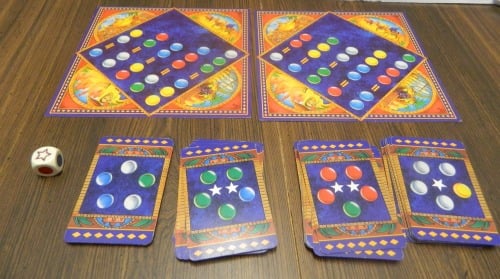 In the picture above players can make any trade outlined on the top two cards. Along the bottom are the four merchandise cards that players can currently purchase.

After scoring points, the merchandise card that was purchased is removed and replaced by the next card in the stack.

If any player has more than 10 jewels at the end of their turn, they are forced to return enough jewels to the bank in order to get back to 10 total.

Players continue purchasing merchandise cards until one of the players reach the winning number points based on the following chart:

With no prior knowledge of the game, when I saw Bazaar at a local thrift store I thought it was a children’s game. The artwork and the mention of several parenting awards that the game has won didn’t help matters. I honestly wouldn’t have even picked up the game if if wasn’t a $1 at the thrift store. After playing the game, it turns out Bazaar is a classic example of not judging a board game by its’ cover.

My first impression of the game was right in some ways. The game is simple enough for children to play. The game has a recommended age of 8 and I agree with that assessment. The game is easy to learn and play but children under the age of eight will probably not understand the strategy part of the game. While the game is simple enough for children, what makes the game good is that adults can enjoy the game as well and still feel challenged. The strategy involved in the game is actually the most surprising part of the whole game.

Before playing the game I didn’t think the game would be very strategic. I thought you would pretty much just roll the die and collect jewels. Those jewels would then be redeemed for cards. These aspects are all present in Bazaar. If this was all that the game had to offer it would be a pretty boring game. The trading aspect of the game is where Bazaar really shines though.

The trading system is great because it is simple and complex at the same time. Just by looking at the barter cards you can always tell what trades are available. To make a trade you just need to match the jewels on one side of a trade equation and you will receive the jewels on the other side of the equation. The trading system is simple enough that children shouldn’t have any problems with it.

The complexity of the trading system comes into play with always having to keep track of your current inventory of jewels. The game could have easily become a game where you kept accumulating as many gems as possible in order to improve your chances of getting a merchandise card. This is a valid strategy in the game and I actually won utilizing this strategy. The game presents another possibility though. Instead of the “quantity” strategy, there is a “quality” strategy. The fewer jewels you have in your possession when purchasing a merchandise card, the more points you will receive for that card. Therefore just before purchasing a merchandise card you try to get rid of as many of your excess jewels as you can. Trading three or four jewels for one jewel doesn’t seem like a good idea but with this mechanic in play these type of moves actually make quite a bit of sense. While I won with the quantity strategy, another player only lost by 10 points (not even one merchandise card) by implementing the quality strategy.

I really liked the strategy element of the game but I can see some people not liking it as much. To really excel at the game you need to be thinking a lot about future moves. Sometimes the market is not set up to get you the jewels you need so you may need to make two or three trades in order to get the gems that you need. I think you could still have quite a bit of fun playing the game without taking it too seriously/putting much thought into your moves. If all of the players don’t play it this way though, the players who don’t put much thought into their moves are unlikely to win. I can see people that don’t like putting too much thought into their moves, enjoying Bazaar quite a bit less than I did.

Another thing I really liked about Bazaar is the changing market in every game. The markets and the optimal strategy can change quite a bit based on the barter cards picked at the beginning of the game. In the game I played the white jewels were pretty pointless. They had little trade value and they rarely showed up on merchandise cards. In the game I played it was best to avoid white jewels. If a different barter card was selected, white jewels could have been the most valuable jewel based on either trade value or due to showing up on a lot of merchandise cards. I honestly think two games of Bazaar will never be the same (unless you play the game a lot of course). The market and merchandise cards will always be different and they will change your strategy from game to game.

I have heaped a lot of praise on Bazaar and I think it is deserved. Bazaar is a good mix of strategy and simplicity. The game is not perfect though. The game does have a reliance on the luck of the roll. The amount of strategies that can be used in the game does help lessen some of the luck of the roll but it doesn’t eliminate it. If you constantly roll star symbols you are at an advantage over the other players since you can pick whatever color you want. In addition players can get lucky by having the perfect merchandise card flipped over. A new merchandise card could be flipped over that just so happens to have the same or most of the same jewels as one of the players.

The theme of the game is also pretty weak. The different jewels are meant to represent different materials that are traded at a market in order to acquire other goods. The game really doesn’t use the theme that much and it feels like it was an afterthought. If the game’s theme is important to you this might be an issue. The lack of any real theme doesn’t really hurt the gameplay though in my opinion.

The components are solid. I wish the cardboard pieces were a little thicker but they are fine. The jewels are your typical oval shaped gemstones/marbles. The only real problem that I had with the components is that it is sometimes hard to tell the difference between some of the jewel colors and dice colors. Sometimes you have to hold the die just right in order to distinguish between the different colors. The silver, gold and blue faces are the worst offenders. This could have been avoided if the dice didn’t use such shiny colors. The jewels should have been made more opaque and less transparent. This would have made the different colors easier to spot.

I didn’t have much for expectations for Bazaar. By looking at the box it looked like a pretty boring children’s game. I was quite surprised by the game though. The game has a good mix between strategy and simplicity that anyone over the age of eight should be able to play it. Luck still has an impact on the outcome of the game but a good strategy should be able to overcome most of it.

If you only enjoy heavy strategic games, Bazaar will probably be too simplistic for you. If you are more into casual games and don’t like to put too much strategy into your gameplan, Bazaar may not be for you. If the game concept doesn’t interest you, the gameplay is probably not quite good enough to overcome your lack of interest in the game’s concept. If the game sounds at least a little interesting though I think you will enjoy Bazaar and I would recommend that you pick it up.