“Big Foot” is a semi-rare 1977 Milton Bradley game that is pretty much a roll-and-move game with a few nice twists. The goal of the game is to stay away from the Bigfoot creature and help him “scare away” your opponents’ tokens. The game starts with set up where you secretly load ten discs into the Bigfoot creature (five have footprints, five are blank). Each player is then given two tokens of the same color, which they place anywhere they like on the board by player order. The first player places one of his/her tokens and each subsequent player does the same until you get to the last player, who places both of theirs. The placing order then goes the opposite of the first round until all tokens are played.

After this short set up stage, the game begins. All players roll the dice and the player that rolled the highest number gets to go first. A turn consists of rolling the dice and moving only one of your tokens the full amount in any direction you’d like. There are a few exceptions, you cannot move past Big Foot (you need to go around) and you can’t land on the same space as another token (but you can go past them). If all directions are blocked or you can’t move in any direction, you simply lose your turn.

The board is full of different kind of spaces you can land on. If you land on a blue spot, you pick a card and do what the directions tell you to do. The cards do different things but most of them require you to move Big Foot, one of your tokens (often times to a safe spot), or somebody else’s token to another space. There are also two “lose a turn” cards and two “protection cards” (which you can play on one of your tokens that you feel is in danger before another player rolls to move Big Foot and they will be 100% safe that turn). The protection cards are really the only ones worth getting.

If you land on a Big Foot spot (which is something you usually want to actively seek out), you get to move Big Foot and try to “scare away” other players’ tokens. You roll the dice and move the Big Foot creature the full dice amount in any direction. Every time Big Foot lands on a token (even your own), you press down on him to dispense a disc. If the disc has a footprint on it, Big Foot has scared that player’s token out of the game (it is removed from the board). If the disc is blank, that player is safe. You can land on and eliminate multiple tokens in a single turn but you can’t take both of a player’s tokens in a single turn (this is to prevent a player from being eliminated really early in the game). If a player has placed a “protection card” on their token, they are safe even if you land on them (don’t dispense a disc on their token). They must play the card before Big Foot begins to move though. There are also two double Big Foot spaces which double your Big Foot roll and allow him to move twice as far. 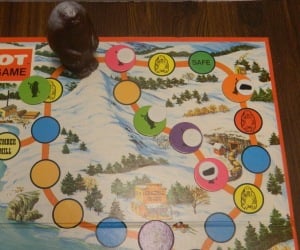 In this example, the green token on the left side landed on a Big Foot space. This is after the player moved Big Foot the number they rolled. Discs were dispensed on each token Big Foot passed and as you can see, the pink and orange tokens have been eliminated from the game. The rest of the tokens are safe.

The final two type of board spaces are location spots and green safety station spots. The location spots do nothing, they are there because a lot of the cards tell you to move a token to one of those locations. The safety station spots can only be occupied for one turn (you must move the token on it during your next turn) but keep you safe from Big Foot for that turn (they can’t be eliminated by him even if he moves onto their space). 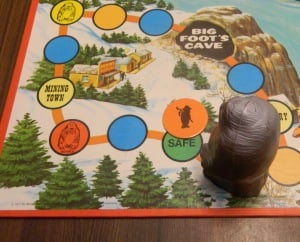 This orange token is very lucky that it landed on a safe spot. Big Foot can pass by it but will not leave a disc that could possibly eliminate it.

When all remaining players have only one token left on the board, all Big Foot spaces become “double Big Foot” spaces and the creature moves double what the player rolled. This is supposed to keep the game moving quickly but I actually really disliked this rule and actually ignored it during the second game I played. The game ends when there is only one token left on the board, that player has survived Big Foot and is the winner.

I picked “Big Foot” up at a rummage sale completely because of this Jimmy Fallon segment, I had never heard of it before but it actually looked kind of interesting (even though it was mentioned in a segment called “Do Not Game”). I didn’t expect it to be a good game, just an interesting take on the basic roll-and-move game. After playing two games of “Big Foot,” that’s basically exactly how I feel about the game. It’s not a game I’ll play again but I do give Milton Bradley some credit for making it unique. Kids will love it and while it obviously isn’t a game made for adults, it’s at least tolerable for them as well.

The game does have some flaws, though some of them are minor. I know this is nit-picky but as someone interested in the paranormal and cryptids, I need to point out that Bigfoot is not the “giant snow monster,” that’s the Yeti. I also had a few problems with some of the game mechanics. While you want to keep both of your tokens away from Big Foot, the only spaces that actually pay to land on are safety station spots, Big Foot spaces, and occasionally the blue card spots (just to try to get a protection card). Except for the two safe spots (not nearly enough in my opinion), your token is probably going to be in danger by your next turn anyway since Big Foot can move quickly and most players are just going to try to keep landing on Big Foot spaces. The only space I would consider landing on over a Big Foot space, is the safe spot (only in certain situations). If you don’t play aggressively (always trying to land on Big Foot spaces), you pretty much have no chance anyway.

One rule I really hate is the double Big Foot rule (when all players are down to a single token all Big Foot spaces become double ones). The two spaces on the board are fine since they will be landed on rarely but this rule can sometimes make the game come down to order of play. The player who “scared away” the last token before the rule comes into play has a big disadvantage since he/she will likely have to survive three double Big Foots (assuming all players find a Big Foot space they can land their token on which isn’t actually that hard) before they even get a chance to attack the other players. They are basically punished for taking out another player’s token. The reason this is such a huge disadvantage is that Big Foot already moves too fast to begin with (two dice are rolled) and if you double that amount he can pretty much move across the entire board (which is quite small).

The second time I played this game, I actually ignored this rule and it really improved things. Tokens are easy enough to hit anyway and it does seem to add a little bit more strategy to the game. When everyone is down to one token you might actually consider positioning to be more important than landing on Big Foot spaces, whereas if he can move across most of the board in a single turn, it really doesn’t matter where your token is because it will probably be hit anyway. The only time ignoring this rule actually adds time to the game is when you are down to two players. It can be a little difficult to hit your opponent with Big Foot at that point but it still shouldn’t take too much longer.

The board is set up in a way that allows you to move in a lot of different directions. Unless you get a really low number roll, you will almost certainly have 6 or more different possible spaces you can land on (and one will almost certainly be a Big Foot space). For strategy purposes, this is good but it does add some time to the game unless your fellow players are nice enough to help you find your possible landing spaces.

I know that sounds like a lot of negatives, but “Big Foot” actually isn’t a bad game. I’m just simply pointing out the flaws that might irritate adult gamers. If you just want a game that your kids will enjoy and you can tolerate, “Big Foot” is pretty much perfect (except for its status as a semi-rare and expensive game). It is much better than most roll-and-move games since there is actually some strategy (but not a lot) to it and it has a unique mechanic. Even as an adult, it is quite fun to move Big Foot and press down on him to dispense a disc and determine a token’s fate. Kids will definitely get a kick out of it.

If you only like serious games with a lot of strategy and decision making, “Big Foot” is obviously not for you. If you want a quick and easy to play family game that you might actually enjoy with your children, it could be for you. I probably wouldn’t pay eBay/Amazon price for it but if you find it at a thrift store or a rummage sale for a couple bucks, I’m guessing you’ll get your moneys worth.

[…] Bigfoot is not a favorite creature of the most suggestible cryptozoologists in your Facebook feed; it’s also a board game from Milton Bradley. “It is much better than most roll-and-move games since there is actually some strategy (but not a lot) to it and it has a unique mechanic,” said a reviewer for geekyhobbies.com. […]

How many cards are actually suppose to be in the milton bradley 1977 board game Bigfoot? Thx

Unfortunately, I no longer own the game so I have no way of being able to check.