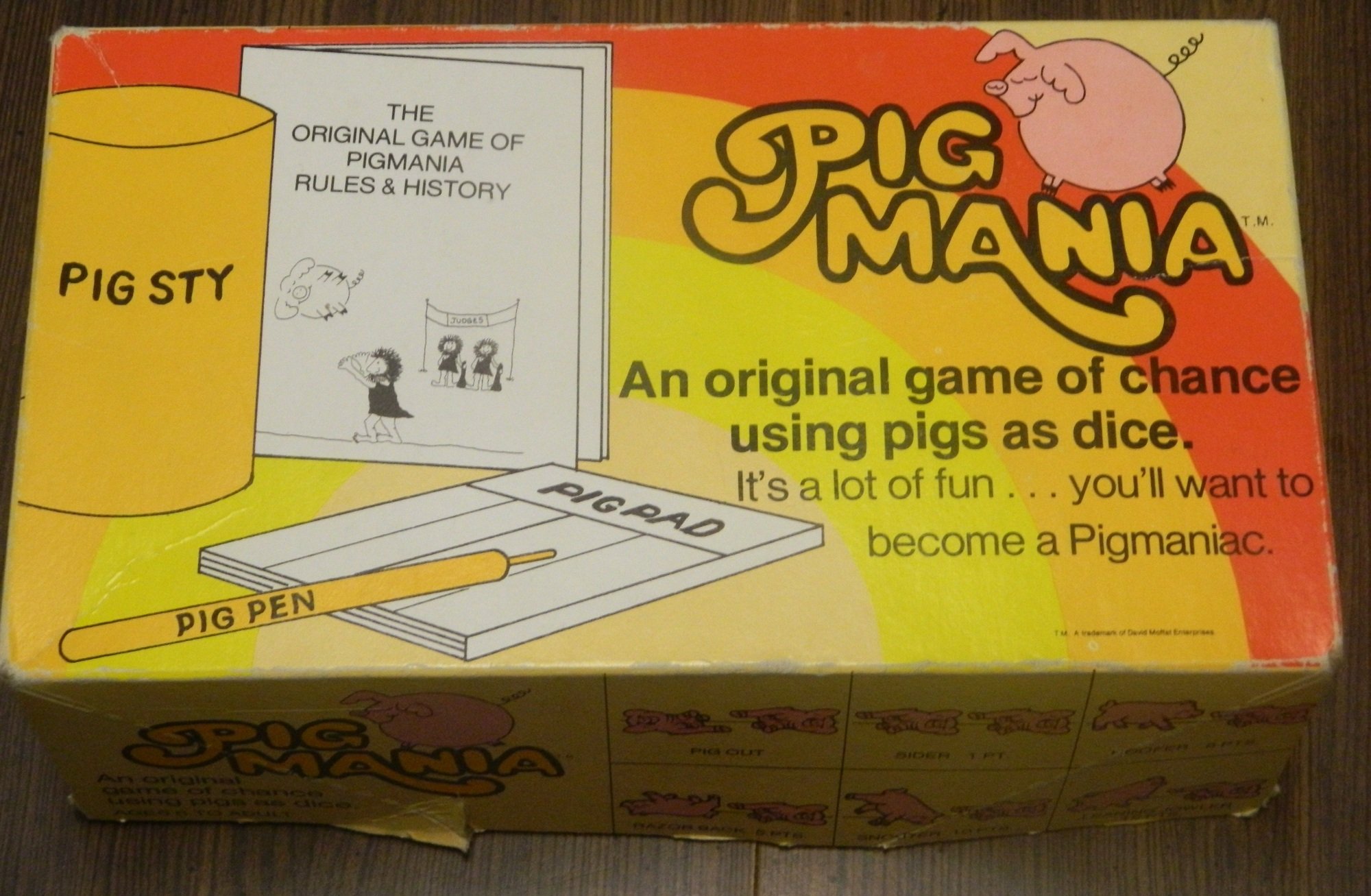 In Pig Mania the goal of the game is to be the first player to get over 100 points. One player begins the game by rolling the pig dice. The pig dice will end up in one of the following positions:

If during any roll both pigs are touching one another (Makin Bacon), the player loses all of the points they have acquired during that turn. The player’s turn is also over.

Any player who is currently not rolling the dice, have the option to hog call. The player has to yell out “Sooee” before the dice are rolled in order to indicate that they would like to hog call. With a hog call the player needs to pick which combination above the pigs will end up in. If they are correct they get double the amount of points that are scored and the rolling player loses double the amount of points. The current player also passes the dice to the next player. If the hog caller is incorrect the hog caller loses twice the points scored on the roll while the rolling player gets twice the points rolled. Players cannot go below 0 points.

The game continues until one player has reached at least 100 points at the end of their turn. The rest of the players have one turn to try and surpass that player. If a player successfully surpasses the leader’s total, all of the other players get one more turn to try to beat the new high score. If no one is able to beat the current high score, the player with the high score is the winner.

Pig Mania (an earlier version of Pass the Pigs) is a weird dice game. Instead of using normal dice, players use two pig dice. Points are scored based on the positions that the pigs land. For the most part I wouldn’t consider myself to be a huge fan of dice rolling games, and Pig Mania is no exception.

Like most dice rolling games, Pig Mania relies way too heavily on luck and has no strategy. As a matter of fact, except for hog calling there is actually no decision making whatsoever in the game. I didn’t try any hog calling myself because I don’t think it is a very wise strategy unless you are way behind and have nothing to lose. The odds of you guessing correctly are not very high. If you guess incorrectly you lose points while also giving one of your competitors more points. Therefore each incorrect guess will dig you into a larger hole.

The game could have used more decision making which would have given the game at least a little strategy. For example players should be able to quit rolling at any time in order to bank the points they had already earned that turn. Instead they need to hope for a pig out before they roll a combination where the pigs are touching. The good news is that at least in the game I played the pigs rarely end up touching one another. The pigs ended up touching one another either one or two times during the entire game. Players should have still been given the choice on quitting whenever they wanted though since with the current rules, your outcome in the game is totally dependent on luck.

As with most dice games, if you are not lucky you will not win Pig Mania. If you keep rolling pig outs or your pigs end up touching one another, you can’t win the game. On the other hand if you get on a lucky streak and get a bunch of points on one of your turns, you pretty much have an insurmountable lead that is hard for the other players to overcome. Unless you somehow can develop a rolling technique that can consistently get the same outcome, you are unable to bring any skill to the game. Without being able to use any skill, you can’t even get better at the game.  You just need to hope that luck is on your side.

Overall the contents are of a below average quality. The dice cup is made out of pretty cheap cardboard. The pig dice are okay. The pig dice roll surprisingly well being for being pigs. The pigs show some detail to them but since they are the only real component the game has, they could have been better. In addition they are too small in my opinion. Sometimes it was actually somewhat hard to tell which scoring combination was rolled. Larger dice would have made this easier to determine.

The biggest problem with Pig Mania is that it is just plain boring. Being boring is not a good sign for a game. Since there is no real skill or strategy to the game, you end up just rolling the dice until your turn is up and then you pass the pigs to the next player. This continues until one player has enough points to win the game. I just didn’t get any real enjoyment out of the game.

While I didn’t particularly enjoy the game, apparently the game has a cult following. The game even has an academic study on the probabilities of the various outcomes in the game. Pig Mania/Pass the Pigs is far from a deep game but I can understand why some people like the game. I am guessing that it mostly comes down to the theme. Using the pig dice and the games wacky nature lends itself to being an interesting game at parties. If you enjoy Pig Mania/Pass the Pigs feel free to share why in the comments section.

Overall I did not enjoy Pig Mania. I thought the game was boring, had essentially no skill involved, and was entirely based on luck. If the pig theme and/or dice games don’t really appeal to you, Pig Mania is definitely not for you. If you really like pigs, dice games, and the concept for the game; you might get some enjoyment out of the game though.