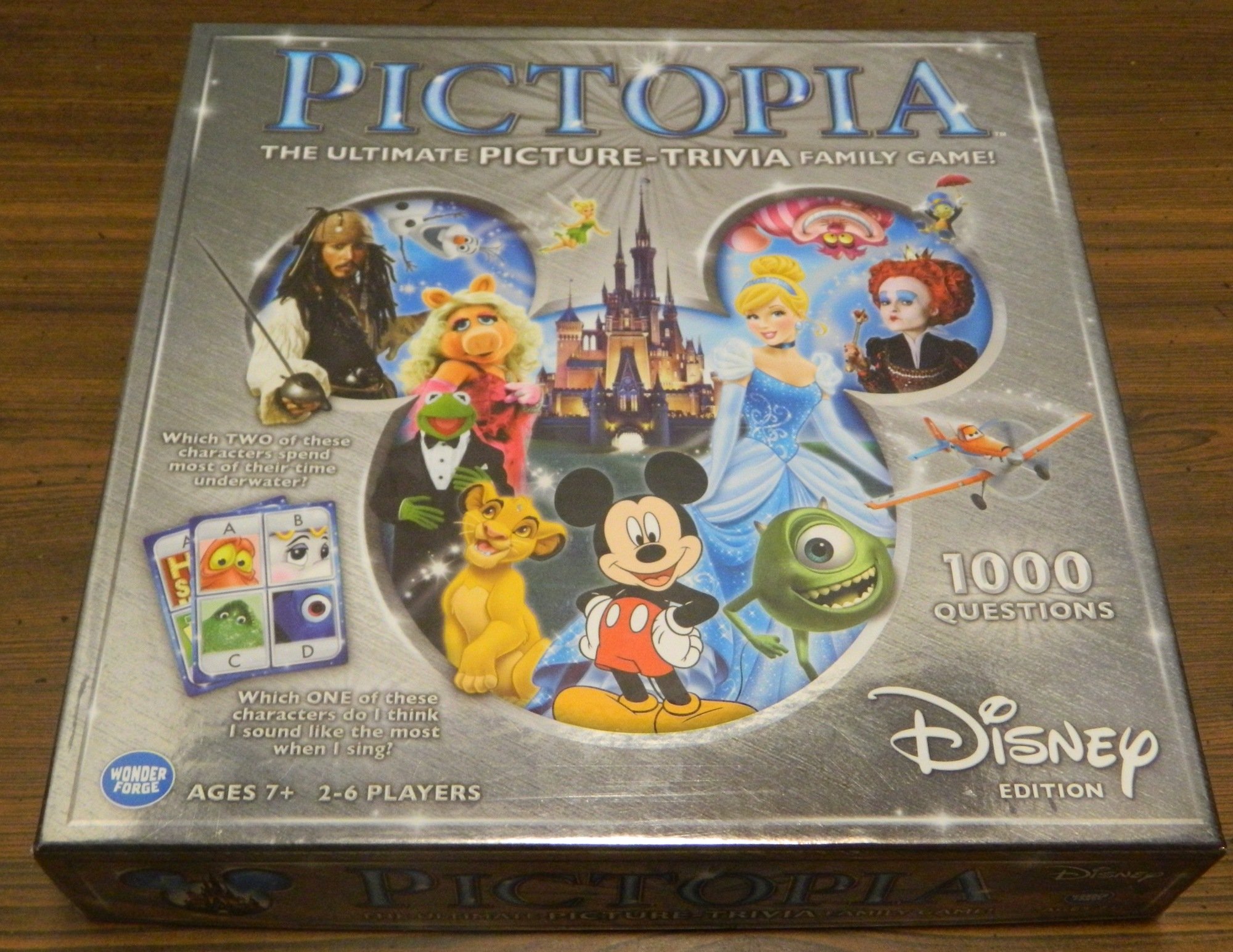 Place the gameboard in the middle of the table. Set the cards to the side of the gameboard with the picture side face up. Each player chooses a playing piece and places it on the start space. Each player also takes an answer dial and the five wager coins of the same color. The player who has the next birthday is the host for the first turn.

The current host rolls the die and moves their piece the corresponding number of spaces. The other players look at the pictures on the card for the current round. The host then reads the question on the back of the card that matches the symbol of the space that the host’s playing piece is on.

The different types of questions are broken down into group questions and individual questions. Individual Questions: For individual questions each player will use their own answer dial to answer the question and all players show their answers at the same time.

The basic premise of the game is that each question card features pictures of four different Disney related characters/movies/etc. All of the questions on the card are based on these four pictures. What I like about this mechanic is that you can get an idea of what the question is going to be about which is helpful for the betting mechanic in the game. Of the questions that I have encountered so far some were interesting while others were kind of stupid.

The more interesting mechanic in Pictopia Disney Edition is the “betting”. A lot of trivia games these days are starting to use betting. While the host moves forward the number of spaces that they rolled, the other players have to use betting chips to determine how many spaces they can move forward if they get the question right. You really aren’t betting though since you don’t lose spaces if you are wrong. You need to use your betting chips wisely though since once you use a betting chip you can’t use that chip again until all of the chips have been used. This means that you can’t just keep using the high betting chips each turn. I like the idea of the betting chips since it lets you bet more on questions you think you will know and less on ones you don’t know. I think the betting chips impact movement too much though since it is more important to bet well than actually know the most trivia.

Without a doubt the biggest problem with Pictopia Disney Edition are the group questions. I am guessing this mechanic was included to make the game more of a family game but I believe it almost ruins the whole game. The problem with the group questions is that everyone has to choose the same answer so everyone either gets it right or wrong. This means the only way to gain spaces on the other players is to bet more than the other players on the question. A player could know almost none of the trivia questions and just ride the coattails of the other players. This makes the game more of an exercise of betting the right amount at the right time rather than actually knowing the most trivia. With 21 of the 33 spaces being group play spaces a majority of the questions will be group play. This means that the player who bets and rolls the best will likely win even if they don’t know the most trivia.

Unless you are playing the game with young children I don’t understand the reasoning behind the group play rules. The only interesting thing I could see with this mechanic is that a player could choose to sabotage the group. If a player used one of their low chips and another player used a high chip a player may try to sabotage the group since they will lose a low chip while the other player(s) lose a valuable chip. I don’t really see this happening very often though since by sabotaging the group the player will still lose spaces to the player who was the host for that round.

I found this group play mechanic to be terrible but the good news is that it is easily replaceable. You could just decide to ditch the group play rules and have every question be an individual question and the problem solves itself. Ditching the group play allows the player who knows the most trivia to have the best chance at winning the game which is how it should be with a trivia game. Unless you are playing the game with young children I would highly recommend implementing this rule change.

Another issue that I have with the game, which is present in too many trivia games, is the fact that the game is too short. I don’t know why but most trivia games use a gameboard that is way too short. This is a problem in Pictopia because it doesn’t give players enough time to catch up or build a lead. Basically whoever uses the right betting chips at the right time and rolls well is likely going to win the game. I would say that the game is about 20 minutes long. I think the game would have benefited from being a little longer since it would have eliminated some of the luck from rolling the die and choosing the right betting chip at the right time.

One of the first things I wonder about with most trivia games is what is the difficulty of the trivia cards. Most trivia games fall into one of two camps. There are generic trivia games that address a bunch of different topics. The questions in these games are generally not highly difficult as long as you know the very basics of the topic. Then there are the specific trivia games that feature just one topic. Since they focus on only one topic they have to be extremely specific and thus can be quite hard. What is interesting about Pictopia Disney Edition is that I wouldn’t really classify it as either type of trivia game.

Some questions are quite generic and are really easy. For example one question from a card that pictured four vehicles was which of these vehicles travel along the ground. One of the pictures was of the house from UP and unless you have no idea what UP is about you know the answer to the question. Some of the questions are so easy that you only need to know the very basics of the movies/topics from the pictures in order to be able to correctly answer the question. Most of these questions are from the cards that feature characters from several different movies.

Component wise the game does a pretty good job. The card layout is good and the artwork is obviously nice since it uses the artwork from the movies. The playing pieces are pretty nice. The answer dials work well. The betting chips are pretty thick. The best part of the components though is that the game comes with 1,000 questions. You will usually only use 10-25 questions per game so you can play a lot of games before encountering repeat questions.

Overall I would say that Pictopia Disney Edition is a very solid trivia game. I like the premise behind the game where each question is based on four different pictures. I also like the betting mechanics even though I think they have too big of impact on the game. The questions are kind of hit and miss though as some questions are way too easy while others are too hard. The group play mechanic is also a terrible idea (outside of playing with young children) so I would ditch the group play mechanics. Pictopia Disney Edition is a solid but unspectacular trivia game. If you are a fan of Disney and trivia games I think you will enjoy Pictopia Disney Edition and should pick it up. If you don’t like Disney or trivia games though I would pass on the game.

2 thoughts on “Pictopia Disney Edition Board Game Review and Rules”