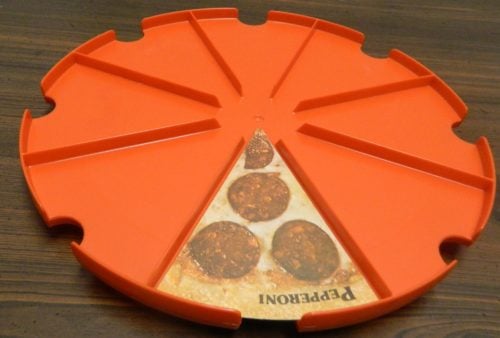 A player just played the pepperoni card. The next player has to play a card to the left or the right of the card already in the tray.

If after playing a card, there are three pizza slices next to each other that have the same topping, the player takes those pizza cards and any cards that are underneath those cards. If a card features multiple toppings the card acts as a card for all of the toppings on the pizza slice. 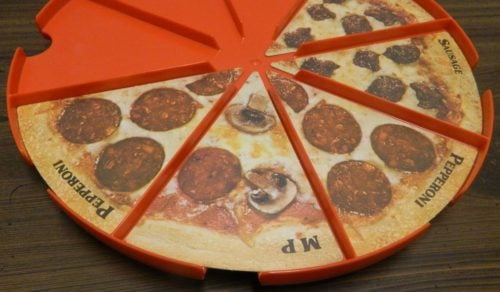 There are three pepperoni cards next to each other. The player who played the last pepperoni piece gets to take all three cards. 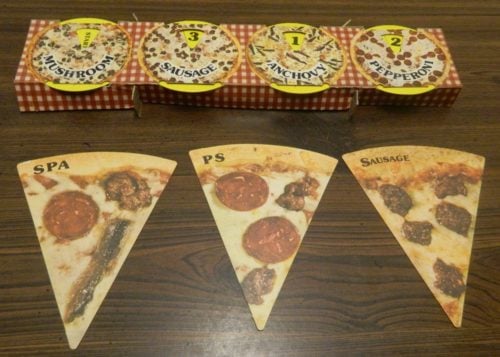 This player has matched three sausage pizza slices. Between the three pieces of pizza there are three sausage, two pepperoni, and one anchovy.

Players are trying to acquire cards in order to turn their dials to “pizza” The player has to try and avoid collecting pizza pieces that have their ugh topping on them though. If a player turns the dial of their ugh topping to “pizza” that player is eliminated from the game.

This player has taken enough anchovy pizza slices that the anchovy dial has reached “pizza”. Since anchovies was this player’s “ugh” topping, this player has been eliminated from the game.

If the draw pile runs out of cards, all of the cards scored by players are shuffled and form a new draw pile.

A player wins the game if they turn the three dials of the non-ugh toppings to “pizza”. If a player turns the ugh dial to “pizza” on the same turn they otherwise would have won, the player is still eliminated from the game.

This player has gotten their mushroom, sausage, and pepperoni dials to pizza. Since the player’s “ugh” card was for anchovies, this player has won the game.

When I first saw the Pizza Pie Game I was expecting a kind of stupid children’s game. The recommended age of 7-14 didn’t help things since games that have an upper age range usually are not very good. While the Pizza Pie Game has some serious issues, I have to admit that I was a little surprised by the game.

The main reason that the Pizza Pie Game was better than I was expecting is that the game has more going for it than I would have thought. The game actually has some interesting ideas for a children’s game. Instead of just being a game where you need to get three cards of the same topping, you need to play cards to the gameboard in a way where you can get three in a row. This adds some strategy to the game as you need to try and position the cards in order to help yourself while not helping the other players.

I also like the idea behind the ugh cards. I can’t think of a lot of children’s game that have hidden information/objectives. While you really can’t hide your ugh topping for very long, it does add a little strategy to the game as it is beneficial to try and figure out what toppings the other players don’t want since you can use that information to stop players from taking pizza slices. This also provides for a little deception where you can purposely take a couple slices for your ugh topping just to throw off the other players to your actual ugh topping. If they think a topping is your Ugh topping they may give you opportunities to take a topping that they otherwise wouldn’t let you get.

The biggest problem with the game is the fact that it was made for children. In order to make the game easier to play the game limits what you can do on any given turn. On most turns you don’t have many choices of where to play a card. If there are open spaces on the game tray you are forced to play next to another pizza slice. This creates problems since you are usually forced into making moves that aren’t going to help you. Unless the player before you makes a bad mistake or has all cards of the same symbol, they likely won’t play a card that lets you place a third topping in a row. This means that players usually need to stall/mess with the other players on their turn. There is no point to playing a slice with the same topping as the slice it is played next to since you are just going to give points to the other players since someone will take the cards before it gets back to your turn.

Basically the game becomes a stalemate where everyone is trying to stall for as long as possible until they are put into a scoring position. Outside of a player making a mistake or having terrible cards for the situation, nothing really happens until the whole tray is filled with cards. The first player that gets to play after the tray has been filled gets a huge advantage. When a player gets to play a card wherever they want it becomes considerably easier to make a match. It is so much easier that if a player gets this opportunity more than other players they have a very good chance at winning the game. This adds quite a bit of luck to the game making it more of an exercise of who gets lucky rather than who plays the best.

The biggest issue with this area of the game is that I don’t know if there is house rule that can really fix this problem. One thing that I would suggest would be to let players play cards wherever they wanted on the tray but this will probably cause problems since players will still refuse to play cards to help the other players. This means that it will take a long time to get to a situation where players can get three toppings in a row. The game needs some rule that gives players some flexibility but also forces players to play tiles making it possible to get three toppings in a row. I don’t know if this is possible.

Because of this problem I really can’t recommend the Pizza Pie Game to adults. The strategy in the game is extremely obvious in most situations. Players will try to avoid helping one another unless they have to. Therefore players just need to get lucky and have another player make a mistake or get lucky that the cards turn out in their favor. I just don’t find it that enjoyable when a game’s outcome mostly comes down to luck. This is disappointing since the Pizza Pie Game actually showed some promise.

The Pizza Pie Game was made for children though and I think children could get quite a bit of enjoyment out of it. Younger children aren’t going to understand all of the strategy behind avoiding helping the other players so the stalling won’t be that big of an issue. Younger children are going to just play cards hoping to get three in a row while not worrying about setting up another player to get three in a row. Add in the somewhat charming theme and I think children could have quite a bit of fun with the Pizza Pie Game. I don’t agree with the game’s age recommendation though since I don’t see teenagers enjoying the game. I see the game as more of a game for 5-10 year olds. The game could work for a family game as adults will enjoy it quite a bit more than most children’s games but adults will be forced to deliberately make bad moves in order to keep younger children in the game.

Component wise the game is solid. I like how the pizza slice cards add to the theme of the game but they present issues when you try to shuffle them. The pizza cards are also kind of thin and for some reason the pizza slices look kind of disgusting. The scoreboards are okay even though they would be more durable if they were a little thicker. Otherwise the contents are pretty typical for a 1970s Milton Bradley game.

The Pizza Pie Game actually surprised me as it is actually pretty decent for a children’s game. The game has some interesting ideas and has more strategy to it than your typical children’s game. The problems come from the game not working that well with adults. The strategy in the game is so straightforward and obvious that players are not going to help out another player unless they have to. This means that the game’s outcome will mostly come down to luck. This is the main reason I really wouldn’t recommend the game to adults unless you find the game for cheap and really like old children’s games.

I think children could really enjoy the game though. The game has a surprising amount of depth for a children’s game but is still simple enough that children shouldn’t have trouble playing the game. Younger children will likely not have the same issues with the game’s strategy since they will be more focused on getting three topics in a row than preventing others from doing the same. Also most younger children will probably love the game’s theme. This is why if you have younger children I would probably recommend picking up the game.

If you would like to purchase the Pizza Pie Game, you can find it on Amazon