One of the original big names in the board game industry was Sid Sackson. While we haven’t reviewed a lot of Sid Sackson games here on Geeky Hobbies, Sid Sackson has made a lot of classic board games among the 100+ games that he created in his career. Today I am looking at one of those games BuyWord. BuyWord is an interesting game because it combines two genres I never thought would be combined: word games and economic games. Although that sounds like a strange combination it ends up creating one of the most interesting and best word games that I have ever played.

The leader rolls the die to determine how many tiles each player will draw. For example a roll of a two means that each player will draw two tiles. When drawing tiles players need to keep their new tiles away from any tiles they still have from previous rounds. If there are not enough tiles for everyone to take their tiles, no one draws tiles and the game enters its final selling period. 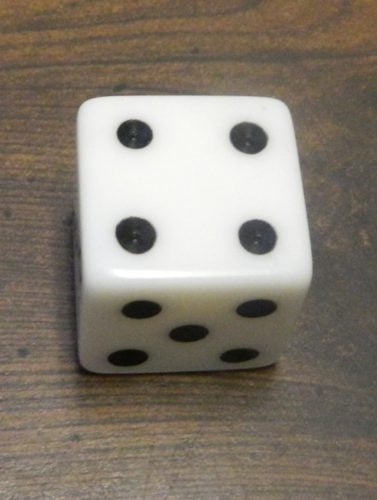 The current player has rolled a four so all of the players will draw four tiles. 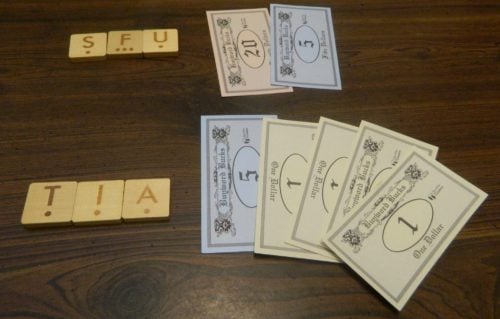 After everyone has decided whether to buy their tiles, all of the players have the opportunity to sell words that they can create with their tiles. A player can sell multiple words in the same round. Before the game begins players choose which words should be considered acceptable in the game. When a player forms a word they can use as many tiles as they want in the word but can only use one wild tile in each word.

When selling a word the player counts up the number of dots/pips on the bottom of the tiles. They then multiply this total by itself to get the value of the word. All of the tiles used in a sold word are put into the box. 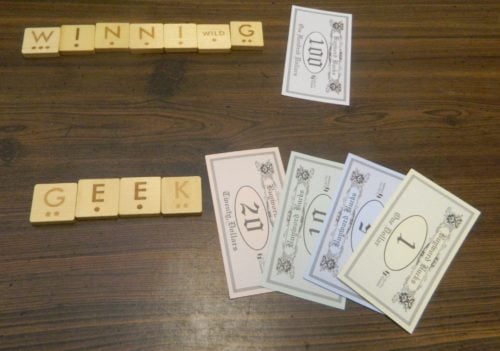 If at the end of a selling period a player has more than eight tiles they either have to form a word with some of their tiles or discard them without getting any money until they have eight or less tiles. The die is passed to the next player and the next round begins.

The game ends when no more letter tiles can be drawn and everyone has a last chance to sell off their tiles. The player with the most money at the end of the game wins.

I don’t know whether I would consider myself a fan of the word game genre. I don’t mind the occasional word game but I wouldn’t consider it one of my favorite genres either. I think one of the biggest problems that I have with the word game genre is that there is a lack of word games that do something original. Most word games can be boiled down to draw tiles/cards and form words to score points. A few games diverge from this formula (Word on the Street) but a large majority of word games only offer slight tweaks to the formula.

This is why I was quite interested when I heard about BuyWord. BuyWord combines a typical word game with an economic buy low/sell high mechanic to create a truly interesting twist on your typical word game. I was skeptical of the combination at first but I will say that two mechanics that couldn’t be much different actually combine to make a fun and original word game.

If you have ever played a word game before, you should be able to quickly pick up BuyWord. Outside of the buying and selling BuyWord plays like every other word game. The buy/sell mechanic is quite easy as all you have to do is count up dots and perform some basic multiplication (or use the supplied charts). I really can’t see anyone having any trouble picking up the game if they are familiar with any other word games.

While the buy and sell mechanics are not complicated, they actually play a huge role in the game. To do well in BuyWord you need to look for bargains. You can’t overspend on tiles or you will lose money even if you can use them for long words. You will encounter situations where you will have to pass on tiles because they are just not worth the amount of money that you have to spend to get them. Like all economic games you are looking for deals where you can buy low and sell high.

What is crucial in BuyWord is using the multiplication mechanic in your favor. BuyWord makes the letters that are harder to use more expensive/valuable in the game. This might seem strange at first but it actually makes sense when you think about it. While it costs more to buy a hard to use letter, that letter can become really valuable if you can come up with a long word that uses it. If you don’t have a use for it though, you likely won’t want to buy an expensive tile since it will drive up the cost of all of the other tiles you drew that round.

This illustrates one of the few issues that I have with BuyWord. While the economic mechanics remove some of the luck from the typical word game, they add some of their own luck. The tiles you draw in the game have a big impact on your success in the game. If you draw the right tiles at the right times you can get a bargain. If you draw a lot of expensive tiles in the same round though you will either have to pay a lot for those tiles or you will have to pass on them which gives you less opportunities to make money than the other players. If you draw poorly in a couple rounds you are going to have a hard time winning the game.

Other than adding some luck to the game, I really like the economic mechanics in the game. Instead of just trying to form words you need to figure out whether you can use the tiles to make more than you paid for them in the first place. In addition to trying to get a bargain on tiles, your goal is to try and form as long of words as possible. Since the value of the word is determined by the number of dots, the more tiles you use the more valuable your word will become. You will likely want to hoard tiles but the game gives you a limit on the number of tiles you can hold. When you get close to that limit you need to figure out the best use of your tiles to maximize their value.

Another small issue I had with BuyWord is that it is too short. At least in a four player game there is not a lot of time to actually make money in the game. With the game ending so quickly there is not enough time to really form a strategy and thus luck plays a larger role in the outcome of the game. I wouldn’t consider this a huge problem though since you could easily just play through the tiles a couple times and determine the winner by who has the most money at the end.

On the positive side though this actually leads to the game working quite well as a single player game. While a decent amount of games have a single player option, BuyWord is a game where the single player option could really shine. Since the game really has no player interaction, the single player game basically plays the same as the normal game. Instead of comparing your score against the other players you compare it to past scores and benchmarks to see how well you did. While it is probably still more enjoyable playing BuyWord with other people, I can see a player having a similar experience playing the game by themselves.

As far as the components are concerned I can only really comment on the first edition. There has also been a Game of the Year edition released in 2005 and the newest version is a deluxe version released in 2011. The first edition has very average components in my opinion. The game has quite possibly the thickest box that I have ever seen. The cloth bag is pretty nice but the rest of the components are pretty average. I like that the letter tiles are larger than a lot of word games but the quality is probably slightly worse than most of these type of games. The paper money is typical paper money but I think the game could have had a better distribution of money since you can run out of some of the bills pretty quickly.

I have to say that I was surprised by BuyWord. While the main mechanic of the game is similar to every other word game, the economic mechanics are really interesting for a word game. These economic mechanics make BuyWord one of the most enjoyable word games that I have played. The mechanics of having to buy tiles low and form them into words to sell high is such a unique mechanic. The game does rely a little too much on tile draw luck and there isn’t a lot of player interaction but BuyWord is an enjoyable original word game.

If you don’t like word games, I don’t think BuyWord will change your mind even though it plays differently than your typical word game. If you generally like word games though and want to try something new I would highly recommend checking out BuyWord.

If you would like to purchase Buy Word you can find it online: Amazon