The object of the game is to score the most points after three rounds.

On each players turn they roll the two bull dice. Based on how the bulls land, the player scores points according to the following chart:

The positions of both bulls are scored. 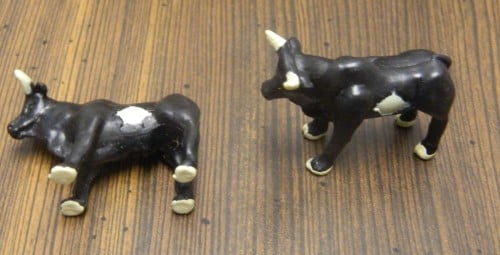 In this situation the player rolled a E-Z Rider (5 points) and a Stampede (10 points) for a total of 15 points.

If both bulls are in the same position they receive twice as many points as they would normally score.

The player has rolled two Bull Dozers. Each Bull Dozer is worth 10 points. Since both dice are in the same scoring position, the player scores twice as many points as they normally would score. In this case the player would score 40 points ((10+10)*2).

If a player rolls two Terri-Bulls their turn is over and they lose all of the points they had acquired in the round.

The player has rolled two Terri-Bulls. Their turn is over and they lose all of the points they acquired during their turn.

Each player gets three rounds to score points. After three rounds, whoever has the most points wins the game.

A while back, I took a look at the game Pig Mania. Also known as Pass the Pigs, the game has a dedicated fan base since it has been reprinted quite a few times through the years. If you read my review you already know that I was not a big fan of Pig Mania giving it a 1.5/5. My main problems with the game were that there was no strategy to the game and the game is mostly just a test of luck.

I bring up Pig Mania/Pass the Pigs because Bullies! the Dice Game is pretty much Pass the Pigs with a tweak to the theme. Both games rely on rolling strange animal shaped dice and scoring points based on how they land. Bullies only has one somewhat significant and a couple minor differences from Pass the Pigs. Despite being a newer game which afforded it the opportunity to fix the issues that plagued Pass the Pigs, Bullies somehow manages to be worse than its’ predecessor.

Not surprisingly Bullies relies too heavily on luck. Unless you have a system of rolling dice better than other players, your skill/strategy will have no impact of the game. You pretty much just roll the dice and hope that you don’t roll two Terri-Bulls. This feeling that you have little control over the game, is one of the things that I hated most about Pass the Pigs. The game is just not very fun and feels more like a chore than a game.

The biggest difference between Bullies and Pass the Pigs accentuates this lack of control. In Pass the Pigs you could end your turn at any time and bank the points you had acquired during your turn. If you were lucky and scored quite a few points, you could protect them. This helped offset some of the luck. In Bullies you have little choice in when you want to stop. You are forced to continue rolling until you reach 90 points. Good luck reaching 90 points. Out of twelve turns, only one player was able to score 90 points and they could only do it once. So eleven out of twelve turns were a waste of time. This created a very suspenseful ending with only one player scoring any points.

This rule ruins the entire game. It was hard enough scoring points in the game to start with and this rule makes it almost impossible. The whole game feels like a waste of time since almost every turn involves one of the players rolling the dice a couple times until they eventually got the double Terri-Bulls and their turn is over. If you somehow get 90 points in a turn you better stop immediately or you are likely to lose all of the points you have earned that round. You could also easily win the game just having one turn reaching 90 points.

Bullies has a couple other rule variations from Pass the Pigs:

While Bullies is worse than Pig Mania/Pass the Pigs in almost every other facet, I actually think the components are nicer. The bull dice are nicer than the pig dice because they are larger. They are probably at least twice as big as the dice in Pass the Pigs. The bigger size makes them easier to see which makes it easier to see which pose they landed in. The bull dice do seem to get entangled more though most likely due to having longer legs. Otherwise the components are pretty similar.

As you can tell from the review, I am far from a fan of Bullies. It is a poorly designed re-implementation of the game Pass the Pigs. I didn’t like Pass the Pigs and Bullies managed to add rules that made it even worse. Instead of a game it felt more like a chore. I can’t recommend Bullies to anyone. If the game sounds interesting to you, you should pick up Pass the Pigs instead since the rules are significantly better. If you already have Pass the Pigs, the only reason to consider purchasing Bullies is if you want the larger dice.

The Christmas Game (1980) Board Game Review and Instructions
Click here to cancel reply.