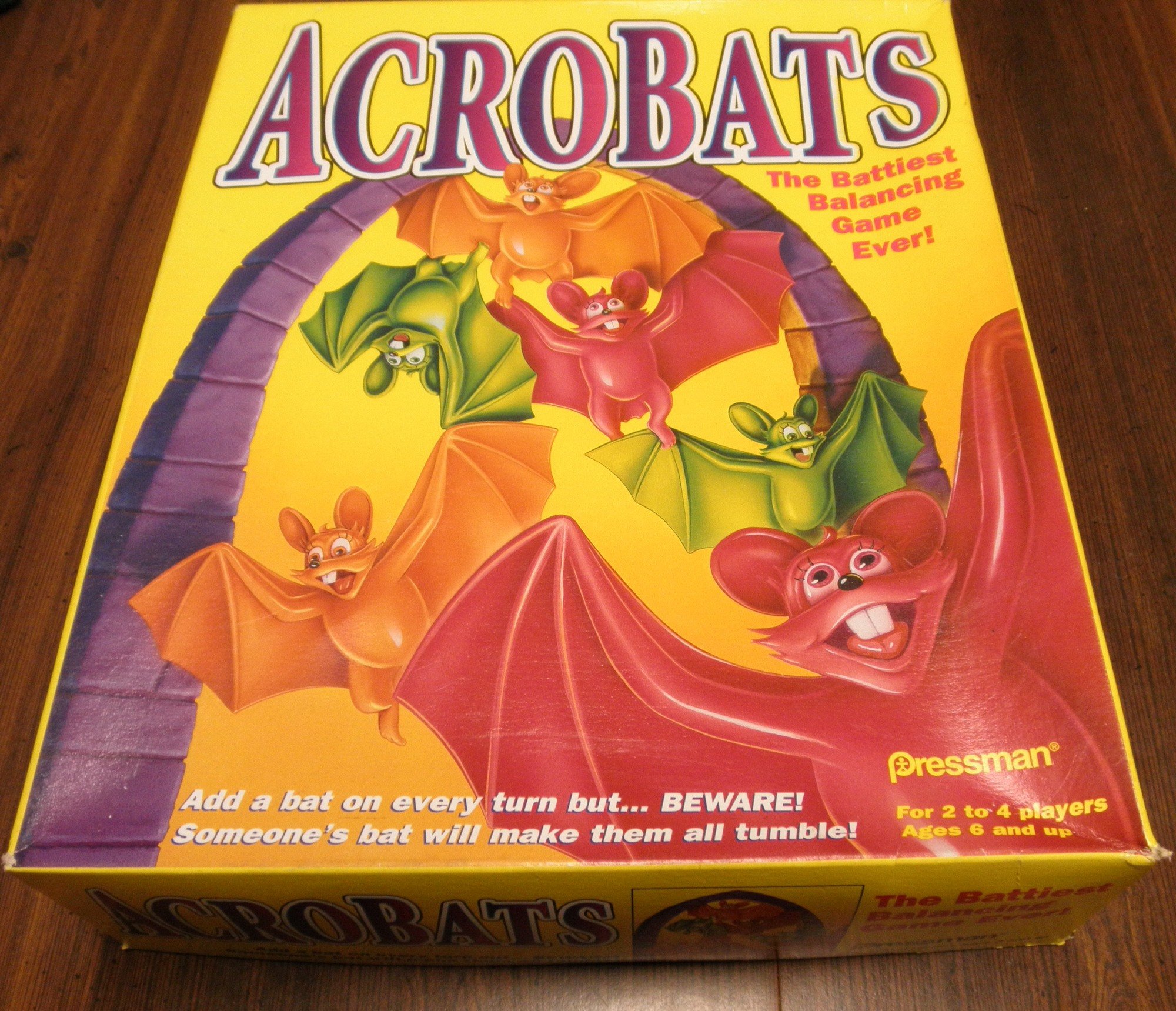 In Acrobats the object of the game is to not be the player that makes the tower of bats fall to the ground. Each turn the current player rolls the die (a spinner is used in the earlier versions of the game). Based on the color rolled/spun, the player needs to place a bat of the corresponding color onto the tower. If there are no bats remaining of the color, the player gets to skip their turn. If the bat you placed makes the tower fall, you take a bat token and the game starts again. When one player gets three bat tokens the game is over. The player with the least tokens is the winner.

Acrobats is a game designed for children as young as six and you can tell pretty quickly. I will preface the rest of this review with the fact that I did not play the game with any children. Therefore the game may be more enjoyable to children as well as parents playing the game with their small children. As far as for adults and older children, Acrobats is not one of those games designed for children that adults can still enjoy.

Due to being a children’s game, there is little strategy to the game. The game is a dexterity game that does not require a lot of dexterity. At least for my copy of the game, the only real way to make the bats fall is if you keep piling bats on one side. . You don’t really have to be patient or even very careful while placing the bats since the magnet on the top bat is so strong that you don’t have to worry about knocking the stack of bats off. Maybe the magnet is weaker in other versions (my version being the 1995 variety) of the game. A weaker magnet would make the game a little more challenging and thus a better overall game.

The strength of the magnet was shown when in the first game my group played, we were actually able to get all of the bats on the tower without any of them falling off. We weren’t even trying to get this to occur since we were playing the game normally and were even trying to put one another into tough situations. It is pretty sad that our first time playing the game we ended up breaking the game. The designers of the game didn’t foresee this situation since there is no mention of this situation in the rules.

With a lack of strategy or required dexterity, Acrobats becomes a game of luck. Your success is dependent on what color you roll. If you roll the color of the small bats or a color that has no more bats remaining, you gain a significant advantage over the other players since you either get to outright skip your turn or pretty much skip your turn since the small bats will rarely if ever make the tower fall. On the other hand if you get the color of the largest bat towards the end, you will most likely loose.

Another problem with the game is that each round is too short. There are only 16 total bats and usually some of them aren’t used in the round. Unless players are taking their time, each round probably only takes a couple minutes. The quick rounds makes the game easy to pick up and play but it also contributes the lack of strategy and dexterity that the game is lacking. If the game had more bats and a stronger magnet to carry them, the game could have had more strategy since with more bats in the tower there would have been more choices on where to place the later bats. In the current setup there is a pretty obvious spot where you should put each bat.

The aforementioned problems makes Acrobats a pretty boring game for adults. You roll a die. Place a bat. Then pass the die to the next player and wait until it is your turn again. It felt like I was just going through the motions until the game ended. Unless the adult has very strong fond memories of the game from when they were a child, I don’t think many adults or older children will get much out of the game if they aren’t playing the game with younger children.

I was pretty harsh on Acrobats and I think the criticism is deserved from an adult perspective. If you are playing the game with younger children though I am guessing you could get quite a bit more enjoyment out of the game. Depending on the child’s color recognition skills I think children under the age of six would be able to play the game since the rules are quite simplistic.