Those who follow this blog likely know that I have a love for indie games, especially fun and unique entries in the casual and arcade genres. While I love story-based games and open world games just as much as everyone else, I find myself looking for simple casual and arcade games even more. The original One Finger Death Punch is one of my favorite games on Steam. Its new sequel is now out and it is every bit as great as the first. It doesn’t really do much to improve on it or change up the formula but as the first game was already amazing, it really didn’t need to. One Finger Death Punch 2 is a phenomenal arcade game that will make you feel like you’re in a karate film taking down hundreds of enemies with your bare hands (or in this case, your mouse).

One Finger Death Punch 2 is a two-button action/arcade game that pits your stick finger ninja against a horde of hundreds of enemies. To defeat them, you will have to press the left mouse button if they are approaching from that side (or the right mouse button if they are coming from the right side). However, most enemies aren’t defeated as simply as that. Some have multiple hit points and will shift from side to side (requiring you to push left, right, left or any other combination), some use projectiles that you will have to deflect or dodge, and for one type of enemy you will have to match a long combination of button presses before they hit the bottom of the screen. If you miss an enemy (or press a button before the enemy gets into the attack zone), you will lose a hit point. Lose ten hit points (some levels only give you five) and you lose. Otherwise, you move onto the next level of kung fu fighting. At least 150 levels and several game modes are included (an endless mode, a super hard mode called “No Luca No,” and others). 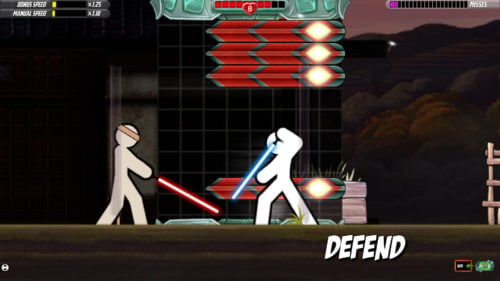 An example of one of the special enemies you will have to fight.

If you think One Finger Death Punch 2 sounds easy, you’re half right. It’s one of those easy to learn, hard to master games. The basic concept is extremely simple but you need to be extremely quick and accurate on your button presses or you will take some hits. However, the game does have a built-in mechanic that slows down the enemies if you are struggling. This goes both ways though, if you start to do really well it will also speed the game up to challenge you. The game starts off with a very comprehensive set of 16 tutorial levels that will teach you everything you need to know in bite-sized pieces (including the most important rule “do not button mash”).

While technically a brawler, at its heart One Finger Death Punch 2 is almost more of a rhythm game (though a very fast moving one). While you don’t have to press the buttons at the exact moment (like most rhythm games), you do only have a short amount of time to kill each enemy and must often switch from side to side to keep them off of your back. Think of it as a sort of fight choreography game, as you will have to fight with a rhythm. The combat in this game is quite simplistic but way more fun than you would think based on the description of the game. It really makes you feel like a badass with a mouse. One Finger Death Punch 2 is also meant to be a pick-up and play casual game that you’ll play anywhere from ten minutes to an hour at a time. It is very good at that as the levels are very short and easy to digest. This game isn’t really one that you’ll play for three or four hours in a session (though it can be pretty addicting) but as a pick-up and play game, it is very, very fun.

One Finger Death Punch 2 has a very simple artistic style involving stick figures but it’s still stylish in its own way. What the stick figures lack for in terms of detail, the death animations more than make up for. While these death animations don’t happen all of the time, some of them are very graphic and bloody and they actually look quite good even with stick figures. While your player and all of the enemies are stick figures, the backgrounds and other elements of the game are much more detailed. I wouldn’t say One Finger Death Punch 2 is one of the prettiest games I’ve ever played but it’s good enough for what it is.

For achievement hunters like me, One Finger Death Punch 2 comes with over 750 achievements to complete. Unfortunately, a large majority of them pretty much qualify as achievement spam. I completed over 200 achievements in my first two hours of the game and even after that, there’s still a steady stream of them (it does slow down a bit though). For your first few hours of the game, you will rarely look at the bottom right corner of your screen and not see at least one achievement notification. You get them for every hundred or thousand kills of certain enemy types, completing every level, and each type of kill. You even get achievements for negative things like taking a certain amount of damage or the first few times you fail a level. I like achievements and I don’t mind games with hundreds of them but One Finger Death Punch 2 is very close to being an achievement spam game. I do wish they would have included some actually challenging achievements like the first game (there were plenty that had less than a 1% completion rate). After browsing the achievement list, it doesn’t seem like this game will have any of those. If you want a lot of achievements and don’t want to pay a lot of money, One Finger Death Punch 2 certainly fulfills both of those requirements.

One Finger Death Punch 2 comes very close to being a perfect casual game but there is one really obnoxious flaw that I absolutely need to bring up. That problem is the game’s level map. Just like the map in the first game, it is terrible and easily the worst thing about the game (though that isn’t really a bad thing to have as your “worst thing”). You can’t scroll through the map and select a level, you need to select a level next to the one currently selected. This wouldn’t be so bad except that many levels unlock two or three different paths you can take, meaning once you finish one path you will have to retrace your steps (selecting each level along the way) to get back to the “hub” and take one of the other paths. This is just a minor nuisance but I honestly don’t know if a worse map system than this could have even been implemented and this is the one and only issue I personally have with the game. I could definitely see some gamers not liking the game’s simplicity, but you can say that about every arcade game.

Overall, One Finger Death Punch 2 is pretty much more of the same. Not a lot has changed, but that’s okay as the original was already one of the best games I’ve played on Steam. This game is also an incredible value at $7.99 (or $5.99 if you pick it up before April 22, 2019). Casual game prices usually skew pretty low but I honestly think Silver Dollar Games could have gotten $9.99-$11.99 for this game. It offers over 150 levels and several other modes (including an endless mode). If you have any interest in casual or arcade games at all, I highly recommend One Finger Death Punch 2. Like the original game, it is one of the best casual/arcade games on Steam.