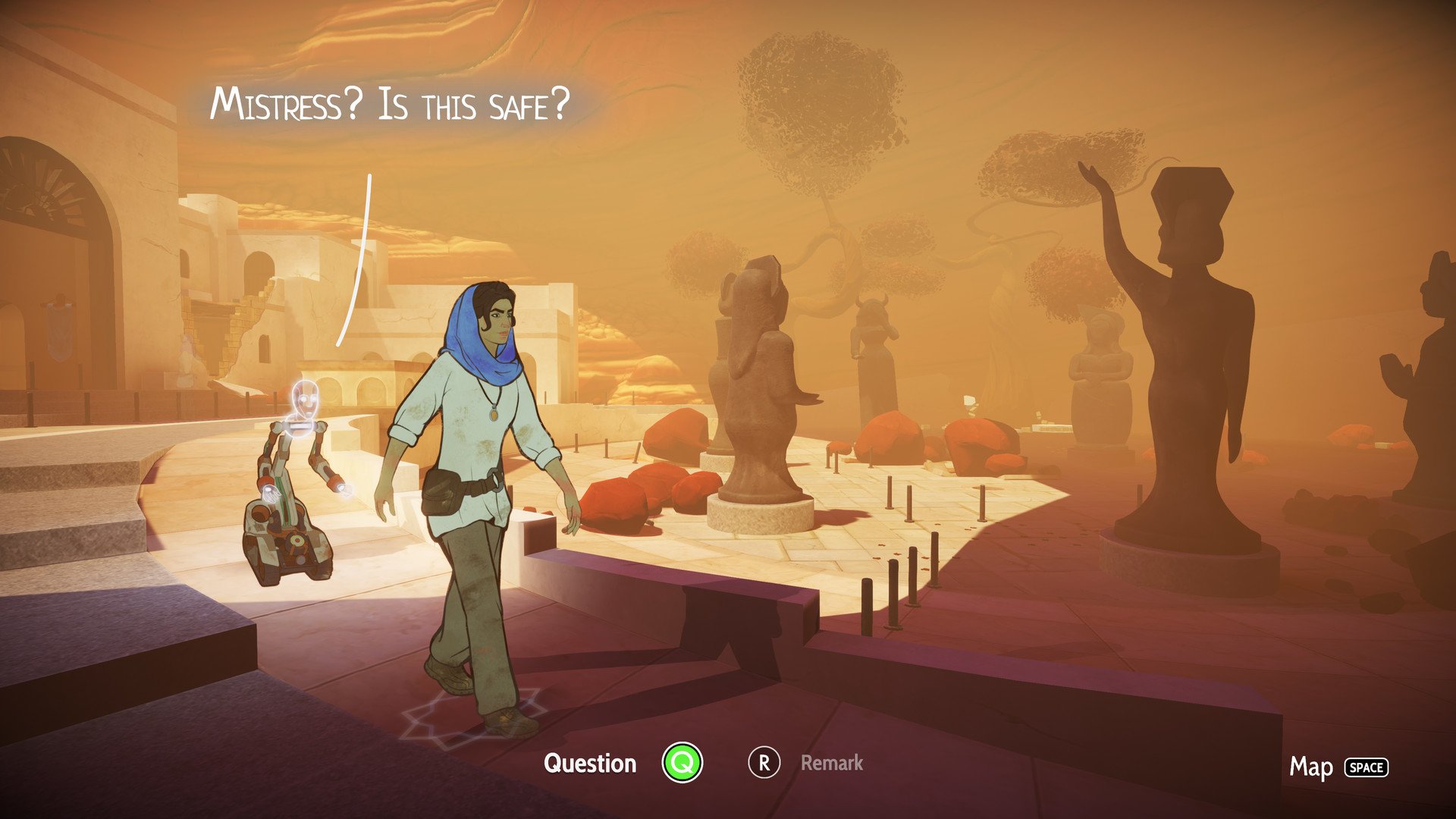 Over the years I have developed quite an appreciation for the developer inkle Ltd. In the past I have taken a look at the Sorcery! series (parts one and two, part three, part four) and I also enjoyed 80 Days. Inkle games may not appeal to everyone, but it is hard to find an indie developer that makes better narrative driven games. When I heard that inkle was releasing a new game, Heaven’s Vault, I was obviously interested in checking it out. While the game reminded me of the other games in the inkle lineup I was intrigued by Heaven’s Vault because it added more exploration mechanics as well an an interesting premise where you played as an archaeologist. Inkle has developed a reputation for creating great text based adventures but they may have outdid themselves with Heaven’s Vault as it combines a compelling story with some really interesting gameplay mechanics.

In Heaven’s Vault you play as Aliya Elasra. You are an archaeologist who specializes in exploring the ancient civilizations of the Nebula. Joining Aliya is a robot named Six (affectionately named due to her affinity to lose/destroy robots). When a roboticist from her university goes missing, Aliya is tasked with following his trail to figure out what happened. While exploring the galaxy Aliya discovers artifacts that make her question her understanding of the past and the present. Will Aliya figure out what happened to the professor and eventually solve the mystery of Heaven’s Vault?

I typically like to begin reviews by talking about a video game’s gameplay as that is usually what is most important. Anyone familiar with inkle’s previous games though should know that the gameplay is not what is most important when looking at their games. The story is generally just as important if not more important than the gameplay. The games rely heavily on the story as the games wouldn’t be nearly as good if their stories weren’t so interesting.

While Heaven’s Vault is quite a bit different than the other inkle games (with regards to the story and gameplay), it maintains the strong emphasis on story like the other inkle games. Heaven’s Vault is an interesting blend of different genres. At times it feels like a typical adventure/exploration story but it takes place in space which adds sci-fi elements to the story. The game takes inspiration from other games/movies/etc but combines it into its own unique package. I found the characters to be quite interesting. The dynamic between Aliya and Six in particular is quite interesting. Aliya is not particularly fond of robots at the beginning of the story and doesn’t take things too seriously. Meanwhile Six is completely serious all of the time and doesn’t really understand sarcasm and jokes. Where I think the story shines the most though is the world building. The world feels like it has real history to it which is important as the game focuses on exploring the past.

Let’s move onto the gameplay. Most of the gameplay is pretty similar to your typical story-driven adventure game. A lot of the gameplay revolves around dialog boxes as you get to choose how you will react to different situations. These decisions can be quite important as each decision can have a pretty big impact on the game. Which choices you make will impact the overall story as the game remembers everything you decide to do. The characters will react to you based on your previous interactions with them. Like the rest of the inkle games this leads to a branching storyline where your choices really matter.

While I could see this mechanic impacting my choices later in the game, it doesn’t feel like it has as big of influence as some of the other inkle games. Maybe the game is just really good at hiding how different decisions impact the main story. It seems like parts of the story won’t change though no matter what decisions you make in the game. Your decisions seem to mostly impact side stories and how characters interact with you. Each person will have their own unique story but I don’t see the main elements of the story changing all that much between different playthroughs. I have not completed the game yet and haven’t restarted the game to see if different choices would impact the game, so my impression could be wrong.

In a divergence from the rest of the inkle games, there are some actual exploration mechanics in Heaven’s Vault. Inkle’s previous games mostly focused on the dialog as you couldn’t really walk around and explore. You basically chose an action and the game then did it for you. Heaven’s Vault distinguishes itself by actually adding 3D exploration mechanics. The mechanics are nothing special as you mostly just walk around and click on things to interact with them. The mechanics might be a little basic but I thought they were a nice addition to your typical inkle adventure. They make the game feel like more of an interactive adventure rather than just an interactive story.

While the other gameplay mechanics are fine, the one mechanic that really intrigued me were the archaeological mechanics based around deciphering an ancient alien language. At the beginning of the game you basically know nothing about the language spoken by the ancient civilizations of the Nebula. As you explore you find symbols on artifacts and carved into structures. As you don’t know the language at all you basically have to guess what all of these symbols mean. You are given options for what each group of symbols could mean and you then try to form a phrase that makes some sense. As you find more artifacts that feature the same symbols you begin to confirm or deny your guesses for what the symbols means. You will encounter a lot of artifacts through your travels which will help you grow your vocabulary rather quickly.

A lot of people that read the last paragraph will probably think that sounds kind of boring. How much fun can it be to translate an ancient language after all? I have to say that I was pleasantly surprised by this mechanic. The mechanic kind of feels like a sort of puzzle as you try to derive the meaning of the symbols you encounter. For some reason it is surprisingly satisfying when you successfully complete a translation. The mechanic is a trial and error process as you do your best to guess what an inscription means. As you find more artifacts though you narrow down your choices until you get to the point where you can make a good educated guess. I don’t see this mechanic appealing to everyone but I really enjoyed it.

I will say that it is kind of difficult to describe the graphical style of Heaven’s Vault. All of the locales in the game are fully rendered in 3D which is a departure from other inkle games. Where the art style becomes interesting is the fact that all of the characters in the game are 2D and are semi-translucent. I am kind of curious if this was just an artistic choice or if it actually will come into play with the story. It is kind of strange seeing 2D characters moving through a 3D environment but I thought it was quite interesting. Some people might not like the game’s style but I appreciated it as it added a unique flavor to the game.

I can’t give you a definitive length for Heaven’s Vault but I would say that it should be long enough for most players. At this point I am about 6-7 hours into the game and I haven’t completed it yet. If I had to make an educated guess I would say that I am around halfway through the game, but I might not even be that far into the game. Unless the game ends pretty abruptly, I would expect the game to last at least twelve to fifteen hours. I do tend to take my time with these type of games exploring every nook and cranny. If you really rush through the game I could see it taking less time. As far as replay value is concerned, I could see replaying the game and making different choices to see how it would impact the story. I am a little curious how much impact this would have though.

At this point it should be pretty clear that I really enjoyed my time with Heaven’s Vault. Fans of the other inkle games should really enjoy their time with Heaven’s Vault unless they are not interested in the game’s concept. I will say that the game is not going to be for everyone though. If you are more into games with a lot of action, it won’t be for you. Heaven’s Vault is a story-driven game after all. If you don’t care for video game stories, you probably won’t really get into Heaven’s Vault. It is the type of game that you sit back and immerse yourself into instead of relying on a lot of action sequences.

The other problem that I had with Heaven’s Vault is only going to impact some people. I ended up playing Heaven’s Vault on a laptop with specs a little above the minimum requirements. With this setup the game does encounter some framerate issues. On lower settings the game would run normally most of the time. It would occasionally encounter times where the framerate would drop below ten frames per second though. This was especially true when sailing between locations. As the game doesn’t rely on high speed action sequences this is not a huge problem as you can just wait until the framerate goes back up. It does take you out of the experience from time to time though. As the game has gotten updates this has improved some so I am hoping future updates fixes the issue even more. If you have a more powerful PC or play the game on PS4 this probably won’t even be an issue for you. I mostly wanted to bring it up for people wanting to play the game on a PC closer to the game’s minimum recommended settings.

Overall I found Heaven’s Vault to be another great addition to the inkle line of games. You could even make a good argument that it is the best inkle game made so far. It all begins with the story. The story is engaging and does a good job creating a world that you want to explore. Like previous inkle games most of the gameplay revolves around choosing how to react to different situations which will impact the rest of the game. This makes all of your choices meaningful even though I don’t know if it makes as big of impact as other inkle games. The most intriguing mechanic in the game though is the ability to translate the ancient writings you encounter in your journeys. This might not sound all that interesting but it is a surprisingly fun little puzzle mechanic. Heaven’s Vault does rely heavily on the story though so it probably won’t appeal to people that don’t really care for story-driven video games. The game also has some framerate issues for computers closer to the minimum requirements.