To begin the game each player grabs a bag of tiles, and one of the gray bank tiles. Each person draws five tiles from their bag and places them on the table in front of them.

The first player places any word that they can form with their letters on the table. During every other turn a player can either add letters to words already played thus creating new words and/or stack tiles on top of other tiles to change the words. Tiles can be placed based on the following rules.

The following words are illegal:

After playing tiles you draw enough tiles to get back up to five tiles in front of you.

One of the unique rules in Nab-It is the ability to nab words from other players. The player who has the most tiles at the highest level inside a word controls that word. For example if there is a word where the green player has three letters at the three tile high level while another player has two letters at that level, the green player would control the word. Also if the yellow player has one tile at the five level and another player had four at the four level, the yellow player would control the word since they are the only player to have a tile at the five level.

In order to nab a word from another player, you need to play a tile that takes control of a word from another player. If you successfully nab a word you get to bank a tile. You randomly grab a tile from your bag and place it on your bank tile. This tile will be worth one point at the end of the game but can no longer be played. You can only bank one tile per turn even if you took control of multiple words during the turn. 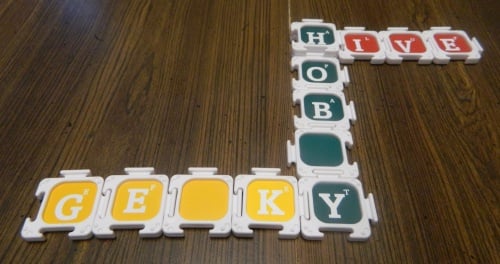 If you are unable to play any tiles you may exchange all of the tiles in your hand for new tiles from your bag. The tiles you get rid of go back into your bag. Exchanging your tiles ends your turn.

The game ends when one player plays their last tile or no player can make any additional moves.

Points are scored as follows:

The player with the most points wins. In case of a tie, the tied players count how many tiles of their color are showing. Of the tied players, whoever has the most tiles showing is the winner.

In general I wouldn’t consider myself to be a huge fan of word games. I don’t hate them by any means but I also wouldn’t consider them to be one of my favorite genres. Nab-It is like most word games in that you use your tiles in order to create words that score you points. As a matter of fact Nab-It is even created by the makers of Scrabble. While it is a lot like other word games it does try to do some new things with the genre. Some of these new features work while others don’t work leaving Nab-It as a very average word game.

One thing I really liked about the game were the components. The bags are nice but the tiles themselves are great. The tiles are made of solid plastic. What is best about the tiles are that they quickly hook together and once hooked they stay together very well. Stacking tiles on top of one another is also easy and the stacks are quite solid. During play I think only one tile fell down during the entire game and that was due to someone accidentally hitting one of the stack with their hand. In that case only one of the tiles fell down while all of the other tiles stayed firmly in place. In addition I like that the tiles have a small letter on both sides which indicates what letter is on the opposite side of the tile so you don’t have to constantly keep flipping the tiles over to see what is on the other side. Overall the components for the game are great and will last for a long time as long as you take decent care of them.

While I think the idea of banking tiles is interesting, it is ultimately too powerful in my opinion. I like that the banking mechanic helps out players whose words are constantly stolen by other players. Since each banked tile is equal to controlling a word at the end of the game though, you essentially need to try to bank a tile every turn. If at the end of the game you have even a couple less banked tiles than your opponents, you are very unlikely to win the game. This adversely affects gameplay since all players pretty much need to use the same strategy that maximizes stealing words from other players. The game would have been better served if multiple strategies could be used to win the game.

One of the biggest problems with the game is the built in punishment for players who try to add new words to the game. Players who play new words to the game are unable to bank tiles since they don’t nab a word that turn. As already mentioned bank tiles are very important to the outcome of the game. Playing new words also allows opponents to build on top of the new words which nets them a bank tile and they also take control of the word which might net them another point. With these two disadvantages for playing new words there is no incentive to try and expand the board since the player will only be hurt by doing it. If possible all players should just try to change the words that have already been played.

In the game I played this issue lead to a problem where there were few areas that could even be played on. Everyone kept stacking words on top of one another since that was the only way to get points in the game. At one point in the game players were pretty much forced into adding some new words to the game board since there was no where else that tiles could even be played. The gameboard essentially was a jumbled mess in the middle with a couple lower stacks on the outside due to players being forced to play new words since there was nothing else they could do.

The punishments for adding new words, turns Nab-It into a game where pretty much every player just tries to keep stealing the same word over and over again. Getting control of words then starts to come down to luck. You need to draw the right tiles in order to be able to change the words and take over them. The right tiles will also allow you to extend words which makes them much harder to steal. Being lucky enough to play a fifth tile in a stack also pretty much guarantees that player at least a share of the word at the end of the game. Since you essentially can only get points from stealing words from other players, the best wordsmith will not always win the game. The winner seems to come down to who got the right tiles at the right time.

Another issue I had with the game is that there was too much sitting around. With the nature of a game like Nab-It where any player can change the board, there really isn’t a reason to plan much before your turn. If you plan out your next move it is likely to be ruined before it becomes your turn again. The game gets tedious at times as you have to wait for all of the other players to finish their turns since they weren’t able to plan ahead. When it gets to your turn you also haven’t planned ahead which makes the game even longer. Due to this problem the game seems to take twice as long as it should.

Overall Nab-It is a technically solid game. There aren’t any broken rules and it plays fine. Due to how the game is structured I actually see it as more child friendly than other word games. Due to the competitive nature, the game is usually played with shorter words than you would typically expect from a word game. Therefore Nab-It might work better than some other games in teaching children vocabulary. Since the game is so competitive, it rewards luck over skill at times. Generally in word games skill should be the determining factor in the outcome of the game. In Nab-It that will not always be the case.

Nab-It is a pretty average word game. If you don’t like word games, Nab-It won’t change your mind. Nab-It tries to add some new ideas to the word game genre. Some of these new ideas are interesting while other don’t really work. Unfortunately some of the new ideas also lead to issues which reduces the strategy component to continually stealing words from other players.

As of the date that this post was written Nab-It was quite cheap on Amazon. While the game is not perfect, if you like word games I don’t think you could go wrong with Nab-It since you should get some enjoyment out of it.

Piece of Pie Board Game Review and Rules
Click here to cancel reply.

[…] I reviewed the game Nab-It. Looking at the basic rules, both games are very similar. Nab-It is really a re-imagining of […]