The fiendish plot cards are separated from the other cards and both piles are shuffled. Each player receives a number of cards equal to their hand size which is six unless their character has a special ability that alters it.

Each turn has two phases. First the player either plays cards or rests. The player is allowed to play as many cards as they want during their turn. If the player rests they may draw two cards and remove one mishap card that was played against them. The player cannot play any cards except for special cards (see below). After a player has either played their cards or rested, they get to draw two cards unless their special ability allows them to draw more. Players are not allowed to go over their hand size so a player will have to discard cards if they have more cards than their hand size allows.

How to Play Cards 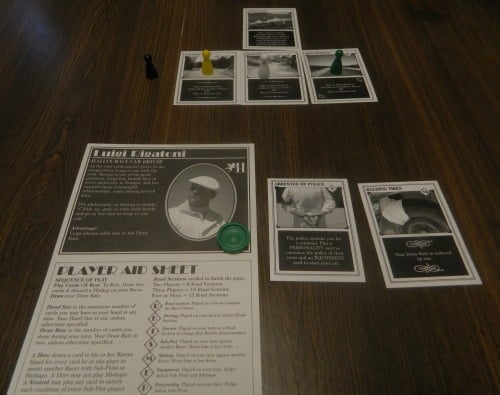 In the picture above the black pawn is at the start line and the other players are further along in the race. For the black player to move to the first road card they will need to play one drive card and discard one card. For the yellow player to move to the second road they will need to play a drive card and discard two other cards. The white player will need to discard a driving card at the start of their turn or go back to the first road card due to the terrain card that was played. The white player will have to play another driving card to move to the third road card. The green player needs to get rid of the sub-plot card before they can play any new road cards.

Besides road cards, there are several other types of cards that can be played which are as follows:

At the beginning of the game each player needs to determine whether they are going to be a hero, neutral or villain. Their advantages and disadvantages are as follows:

When I saw Jaunty Jalopies on a store shelf I had some high expectations for the game. How could a game featuring a 1920’s car race featuring cheesy heroes and villains not be good. Unfortunately Jaunty Jalopies never lives up to its’ potential.

My biggest disappointment with the game is that it didn’t go far enough with the theme. The gameplay itself is nothing special so the game really needed to rely on its’ theme in order to make the game special. Unfortunately it feels like the theme was just tacked on at times.

Outside the character cards, the theme is mostly an after thought. With a 1920’s racing theme which includes villain characters, I thought the game was going to go the wacky cartoony route. Unfortunately it is toned down for the most part. The game could have gone with really wacky sub-plots and mishaps but instead chose to have subplots like being arrested and helping out a woman whose car was stolen. The game could have used some wacky cartoony plot twists. I am usually not a big fan of flavor text but this game could have used more. The game was trying to create an atmosphere but it fails to fully implement it. Jaunty Jalopies settles into a pretty generic card game with a racing theme tacked on.

Jaunty Jalopies has some issues with the rules not always being that clear. The rule sheet tends to repeat itself a lot and glosses over some areas that could have used some more explanation. Some of the cards have the same issues. My group had to discuss some of the cards in order to agree on how the card was supposed to work. I believe some more explanation on the cards could have resolved most of these issues and left less things up to interpretation. The cards also should have used symbols to indicate what cards needed to be played to resolve sub-plots instead of using words in all caps inside the flavor text. You get used to finding the requirements you need to meet but it would have been easier to just use symbols.

Some of the cards in Jaunty Jalopies are kind of rigged. There are some cards that will take you all of the way from the back to the front no matter how far behind you are. There are also cards that will take you from the front all the way back to the start line. These cards are way too powerful and have too much impact on the final outcome of the game.

Another issue with the game is the hero/villain/neutral mechanic. I thought the ability to play as a hero, villain, or neutral character was an interesting idea and could have added quite a bit to the game. If the mechanic had worked the game could have had quite a bit of replay value. Unfortunately the mechanic doesn’t really work

Based on the game I played, the heroes haven’t the greatest disadvantage. In order to use their advantage players need to help other players.  For any benefit you get from the bonus card, you end up helping another player so I don’t think the heroes advantage is that great. I would make the argument that no one should play as a hero in the game because they are at a disadvantage in my opinion.

Meanwhile the villains don’t get to use their advantage that much either. At least in the game that I played, I as the only villain only got two or three mishap cards in the entire game so the villains special ability didn’t really affect the game. If you end up getting a lot of mishap cards I could see the villains advantage having a bigger impact on the game.

While no one played as a neutral character in the game I played, I think their special ability is by far the best. I say that because their ability does not depend on any other player or lucky card draws. Their ability makes it easy to get through sub-plots played against them so they will likely always be towards the front of the pack. Due to most likely always being in the front, not being able to use the valuable experience cards is not that big of a disadvantage. I personally would recommend always playing as a neutral character. Unfortunately playing as a neutral character seems to be pretty boring and takes even more away from the theme.

The quality of the components were disappointing. The card stock is pretty thin and thus the cards could get bent very easily. Overall the artwork is not bad. I like the old black and white pictures on the cards that try to depict 1920’s racing. Unfortunately I think the cards could have went farther with the theme. I wish the pictures were more like you would expect from an old cheesy movie. There was also some issues determining between the “D” and “P” on some of the cards. The character cards are pretty good. Each card has some flavor text about the characters, details the character’s special ability, and gives a rules summary at the bottom of the card. The other contents are pretty much what you would expect.

Jaunty Jalopies is far from a broken game. It is perfectly playable. The game is just kind of boring. The game had potential to be much better than it is. While playing the game you see what the game could have been and end up disappointed that the game never reached its’ potential.

5 Alive Card Game: Rules and Instructions for How to Play
Click here to cancel reply.