To begin the game each player takes a pawn that corresponds to the score board in front of them on the gameboard. The tiles are shuffled and placed face down outside the gameboard. Each player draws five tiles and stands them up in front of them so no other player can see them. Whoever has the lowest valued tile gets to play first (starting with the 7’s and going up).

Players have to play at least one tile on their turn. Players are able to play as many tiles as they want during their turn as long as all subsequent tiles match the suit of the first tile played. Tiles are placed on the gameboard on the spot that matches the tile. They can either be played at the top or bottom half of the spot as long as there is not already a tile in that spot. Joker Tiles (tiles with MB written on them) can be played on any unoccupied space that matches the color of the letters on the tile. Players are able to remove the joker tile in future turns if they have the tile that would occupy the space that the joker is currently occupying. Based on the pictures below, if a player had the king of diamonds they could play it where the joker tile currently sits. When replaced the Joker tile is removed from the game. 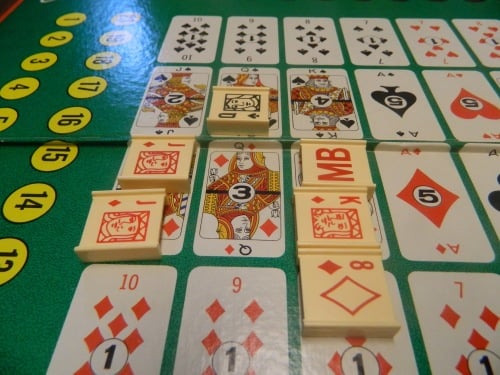 The picture above shows the setup before the current player’s turn. 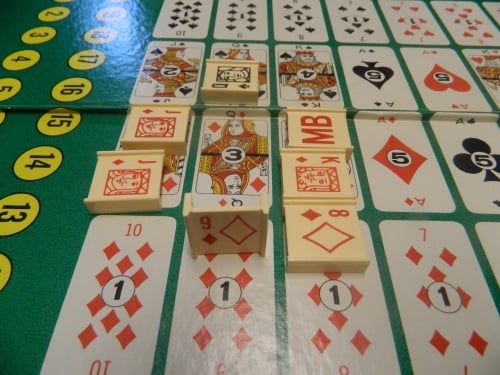 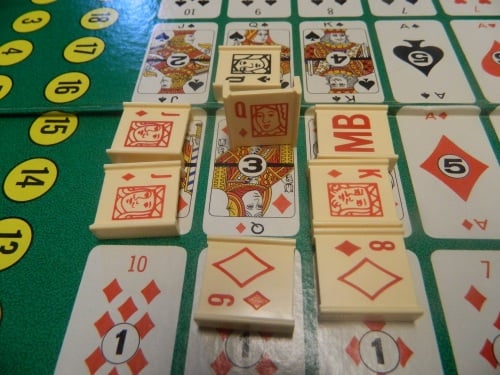 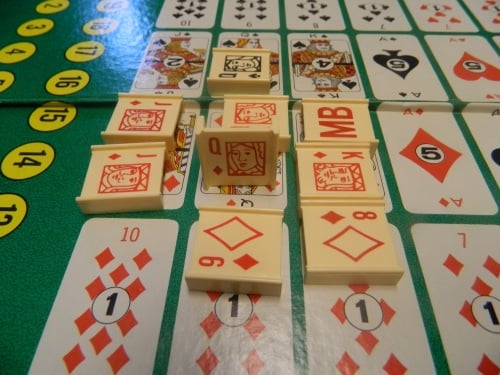 If a player is able to play all five of their tiles in one turn they get 10 bonus points. The player moves their pawn along the scoring track based on how many points were scored. When a player earns more than 20 points, they receive a chip (counts as 20 points) and their pawn moves back to 0.

After scoring, each player draws enough tiles so they have five tiles total in front of them. Players continue taking turns until all of the tiles from the draw pile have been taken and one of the players has played all of their remaining tiles. Players who still have tiles in front of them lose points based on the chart above with joker tiles being a 6 point penalty. Whoever ends up with the most points wins the game.

I had never heard of the game Cardino before I found it at a thrift store/rummage sale for $0.50 or a $1. It didn’t look like it would be anything special but I thought I might as well give it a chance at that price. While it is not fantastic, Cardino actually surprised me quite a bit.

What I liked most about the game was that it had a surprising amount of strategy to it. It is obviously not the most strategic game in the world but it is quite strategic when you factor in the simplicity of the game. Cardino takes only a couple minutes to explain but in order to do well in the game you need to really think out your tile placement. If you don’t think long term you will either miss out on points that you can have gotten or you could end up giving additional points to your opponents.

In addition once you have picked out the tiles that you are going to play during your turn, you need to think of the order in which you will play them. The order in which you play tiles could have an effect on how many points you score. Generally speaking you want to play the highest valued tile first since you can then get points from that tile if you play another tile next to it.

While Cardino has some strategy to it, the game also relies quite a bit on luck. Like most games, the luck of the draw does play a part in who eventually wins. If you draw a lot of the higher valued tiles you are likely to score more points. Drawing a lot of tiles of the same suit is even better. Generally speaking the more tiles you can play on a turn, the better. Since you always draw back up to five tiles, you might as well try to play as many tiles as possible. You will usually score some points for each tile and each tile you play means one less tile your opponents can play and score points with. In addition if you are able to play all five of your tiles in one turn you end up getting 10 bonus points which is pretty significant and could be the deciding factor in a game.

One recommendation that I would give to players would be to count the points earned after every tile is played. The rules recommend scoring the points after all of the tiles have been played. I think it is easier to score each tile individually since it is easier to tell which tiles were next to each other. If you play multiple tiles you need to remember which order you played them in since the order that they were played in can have an impact on the score. Based on the rules each tile is scored in the order that they were placed, so in my opinion you should just score each tile as it is placed.

I also think that the game should have printed the point values on the tiles themselves. It is not a huge issue but at least while you are unfamiliar with the game it is frustrating having to move the tiles in order to see the values printed on the board. Once you get to know the values of each tile this isn’t really much of an issue but I also don’t think that it would have been that hard to print the point values on the tiles themselves.

Overall Cardino is an average to slightly above average game. The game has some strategy to it but also relies quite a bit on luck as well. There are probably other games out there that have similar concepts, and if you have one of those games it probably doesn’t pay to pick up Cardino. If the concept sounds interesting to you though, I think you will enjoy the game.