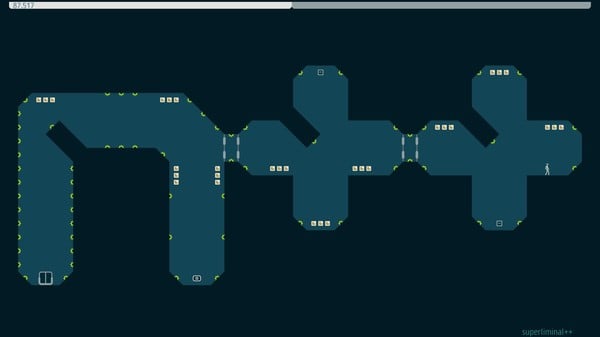 If I had to quickly describe N++ I would say that it is a minimalist platformer that has had everything stripped out of it except for the running and jumping mechanics. Your goal in every level is to traverse the level to activate the button that opens the door to the next level. Along the way you can collect gold which increases the amount of time you have to complete the level and increases your score. You do all of this while trying to avoid robots that are trying to kill you. While you might think this sounds like every other generic platformer, N++ stands above most platformers by focusing on what matters the most, gameplay.

The first area where N++ stands out is with the controls. N++ has only two controls: left and right movement and a jump button. You would think that would be kind of boring but what makes N++ stand out is the game’s emphasis on momentum driven platforming. In most platformers the game is very loose with physics where players can speed up and slow down almost instantly. In N++ momentum matters since your character doesn’t immediately stop or start. In order to jump longer distances you actually have to build up momentum in that direction. While it takes a while to get used to it, I really liked the momentum platforming. Combines with the responsive controls and N++ is a fun platformer.

One problem with the platforming genre in my opinion is that there are generally two types of platformers. There are the platformers that are on the easy side which I wish were a little more challenging. Then there are the really hard platformers that sometimes take hundreds of attempts to beat one level. I would put N++ somewhere in the middle. It is not that hard to beat the levels. You will die but you won’t be constantly dying. This may change in the later levels (I have only played a fraction of the levels at this point) but the difficulty seems challenging enough and yet isn’t frustrating. N++ does a really good job ramping up the difficulty for people who want the challenge though. It is not easy gathering all of the gold in the levels. I think this is the perfect blend for difficulty since the levels are accessible but also bring challenge if you want it.

The next thing I want to talk about is the game’s replay value. N++ boasts having 2,360 hand-made levels. Most of the levels take 10-20 seconds to complete but that is still really impressive. I have played the game for over three and a half hours and I have only played a fraction of the levels. Just playing the campaign levels will probably take me at least 10 hours. The game also includes cooperative levels and there is also a competitive/race mode. Add in the ability to create your own levels and the game could have almost unlimited replay value if the game develops a good community. If you like platformers I find it hard for you not to get your money’s worth out of N++.

So I really enjoyed my time with N++. N++ is not a perfect game though as I have a couple small complaints. First while the game’s difficulty balance is pretty good, I wish some of the levels were a little more difficult. Some of the levels are so easy that I don’t know how you could fail them unless you have no video game experience. Most of the levels are adequately challenging but the occasional level is too easy.

Overall I had a lot of fun with N++. N++ strips the platformer down to the very basics and I think the game benefits from it. The game focuses solely on the gameplay which is for the betterment of the game. The momentum based platforming is an interesting twist on your typical platformer. The controls are tight and the game is just a fun platformer because of them. N++ comes with thousands of levels and even includes a level editor for even more levels. If you hate platformers you won’t like N++. If you like platformers though I would highly recommend N++.