To set up the game place one equals tile in the center of the table to act as the starting tile. Shuffle all of the other tiles (face down) and have each player randomly take eight tiles as their starting tiles. Players keep their tiles secret from the other players. The first player is determined by every player revealing their lowest number tile. The player with the lowest number gets to play first. If two or more players have the same lowest number tile, all players reveal their second lowest tile and so on until the tie is broken.

The first player has added the two, addition, five, and seven tile to the equals sign that was already on the table.

All equations must be played vertically or horizontally. When playing next to a previously played equation, a valid equation does not need to be formed in every direction. Tiles cannot be added to extend an already completed equation. 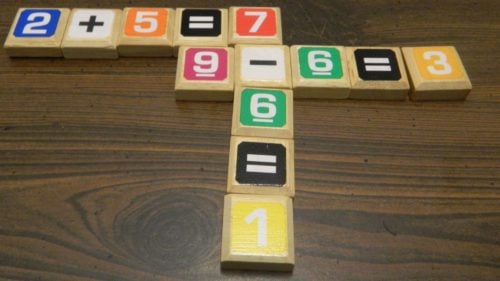 The current player has added the nine, six, equals and three tiles. This is allowed even though the player created the equation “=9”. In a future turn a player can finish the “=9” equation.

The following rules must be followed while creating equations:

If a player cannot find a valid equation to play they must discard one or more of their tiles removing those tiles from the game. The player then draws as many tiles as they discarded. The player’s turn then ends. 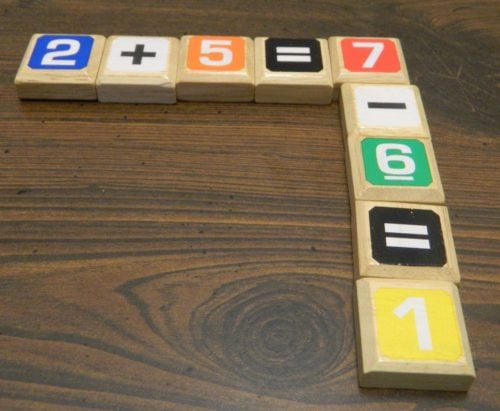 The current player added the subtraction, six, equals, and one tiles. The player would score 14 points (7+6+1).

After scoring is completed the player draws tiles until they have eight tiles in their hand. If no tiles remain the players no longer draw tiles.

Sumology continues until none of the players can play any of their tiles on their turn. Players then count up their scores from the game. The player who has scored the most points wins the game.

Sumology is basically the game you would get if you combined Scrabble with a math game. Instead of using letters to form words though you are using numbers and operators to create equations. Although I have always enjoyed math, I can see that this might be a turnoff for a lot of people who don’t like math. Even if you hate math though I still think you can enjoy Sumology.

While good math skills are beneficial, you don’t have to be an expert at math to do well in Sumology. The game only uses addition, subtraction, multiplication and division so if you have decent skills in those areas you shouldn’t really have any troubles with the game. Good math skills will let you come up with more ways to play your tiles but since you will usually only be playing equations that use three numbers, an operator, and a equals sign, Sumology is not a game where the player with the best math skills will always win.

While the game plays a lot like Scrabble with numbers, I actually enjoyed the game quite a bit. I like the game because it quick and easy to play and yet has some skill and strategy to it as well. Sumology can be played with anyone who has basic math skills. You can even alter the rules to play the game with children that only know addition and subtraction by removing the multiplication and division tiles. Sumology would actually probably work quite well as a tool to help children practice their math skills. While Sumology is a family game, adults can also get quite a bit of entertainment out of the game.

I have to admit that when my group played Sumology we actually misplayed one rule in the game. When we played the game we allowed players to add tiles to already completed equations. This highlighted a somewhat significant problem with the game. The game should have rules specifically disallowing players from multiplying by one or zero, and dividing by one or zero. By misplaying the rule where you could add tiles to equations already completed, these combinations allowed players to continually add numbers onto equations to create larger and larger scores. Multiplying and dividing by one lets you add points to an equation without changing it at all. Multiplying and dividing by zero is worse since it resets your total to zero so you can put whatever numbers you want before the zero and then multiply or divide and the total will reset to zero. We ended up creating an equation where we had a number which we just kept adding numbers to (was well over 1,000,000) and we could just keep adding more tiles since the total would always get reset to zero. While this is not nearly as big of an issue if you don’t allow players to add to equations already completed, it still could give players an unfair advantage by allowing them to play almost all of their tiles on a given turn.

So this problem mostly comes from us playing the game wrong but I have to say that I think the game would be more enjoyable playing it the way we did. Allowing players to add tiles to completed equations adds quite a bit of skill to the game as you can use multiple operators in an equation. Playing the game this way makes the game more strategic and a more satisfying experience since it rewards strong math skills. I am guessing that rule was put in place because it somewhat prevents the issue mentioned earlier and it does add quite a bit of complexity to the game. If you are playing the game with only adults though I would highly recommend using this variant rule.

This actually illustrates another issue I had with the rules. I understand that the game was meant to be for families but some of the rules for what is a valid equation make the game worse in my opinion. In addition to allowing players to add tiles to completed equations, I also think players should be allowed to add operators to both sides of an equation. For example I think you should be allowed to play 4*3=2*6. I assume this rule was added to make the game less complicated for children but it is perfectly valid to have operators on both sides of an equation. Allowing this would add quite a bit of strategy to the game since you would have a lot more flexibility in what types of equations that you could play. While Sumology is still a fun game playing with the game’s official rules, I honestly think the game is better with some house rules.

The biggest problem with Sumology is the fact that luck has a big impact on who wins the game. While strong math skills will help you in the game, drawing good tiles is more important. Tile draw luck comes into play in several different ways. First if you draw tiles that don’t work with one another you won’t be able to play any tiles on your turn. Not being able to score any points on one of your turns puts you at a pretty big disadvantage over the other players. Second the operators available to you have a big impact on your success. If you get no operators or operators you can’t use you won’t be able to create an equation. If you get too many operators you won’t have enough number tiles to actually be able to make an equation. In the game I played one player had three or four equal signs at the same time.

The final area where tile draw luck comes into play is due to the scoring system. I found the scoring system to be interesting but flawed. You score points by adding up all of the numbers you used in the equation you formed. The scoring system is simple and encourages you to use larger numbers and not to use ones and zeros. The problem is that it gives an advantage to players who draw higher number tiles. For example the equation 9-8=1 is worth 18 points while the equation 1+2+3=6 is only worth 12 points. The second equation was harder to form since it required using more tiles and yet it was worth less points. A player that draws a lot of high number tiles can score more than twice as many points as a player that created the same equation just using lower numbers.

The final issue I had with Sumology is that this game can really suffer from analysis paralysis. If one person in your group is the type of player that always has to look for the optimal play, Sumology can grind to a halt while you wait for them to figure out their moves. If you don’t mind letting players take their time choosing their move, this isn’t a problem. For most people though you are going to want to implement some sort of time restraint to make your moves. Players need to be willing to make sub-optimal moves in order to let the game move at a decent pace.

Overall Sumology is a good mix of Scrabble and math. The game is quick and easy to play and could probably be used as a tool to help children improve their math skills. The game is still enjoyable for adult though. The game is fun and has a decent amount of skill even though the game relies a lot on tile draw luck. While the basic rules are fine, I think Sumology is more enjoyable with some house rule additions. While it is not a perfect game I enjoyed my time with Sumology and it is a game that I will come back to every so often. If you think the idea of combining Scrabble with a math game sounds like a good idea I would recommend checking out Sumology.