Place the Gigamons on their stands and place them to the side of the table along with the rock tokens. Shuffle the tiles and make a 3X3 square with face down tiles. Form a draw pile with the rest of the tiles. Give each player a reference card. The youngest player starts the game.

On a player’s turn they flip over two tiles. If the two tiles don’t match flip the tiles back over and play moves to the next player. The one exception is if one of the tiles is a Polymon since the Polymon acts as a wild. 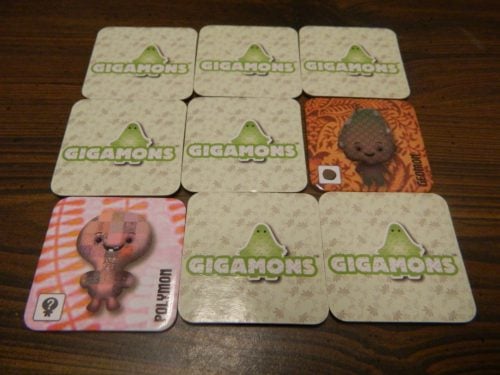 This player created a match since the Polymon will match any other tile. 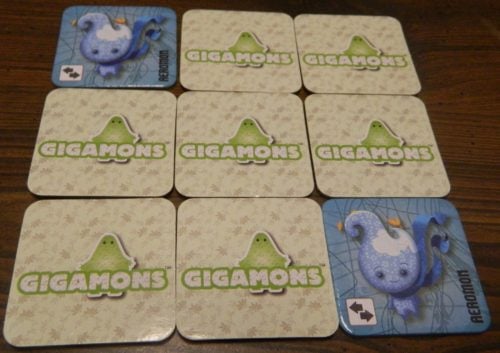 This player flipped over two tiles which matched. The player takes these two tiles and takes the corresponding special action.

When a player makes a match of two identical tiles (excluding using a Polymon as a wild) the player gets to take advantage of the special ability of the two tiles that they matched. These special abilities are as follows:

Floramon: The player takes a tile from the top of the draw pile and adds it to their group of tiles. 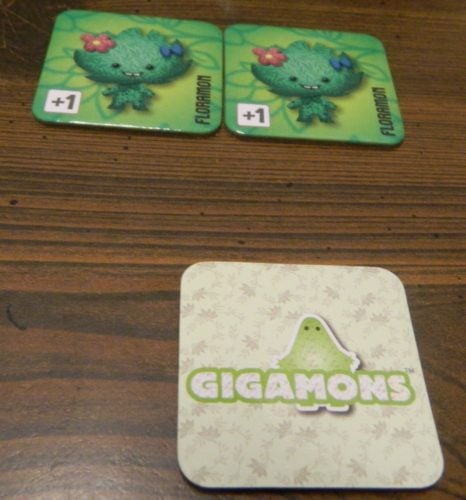 Pyromon: Choose a tile in front of another player and remove it from the game. 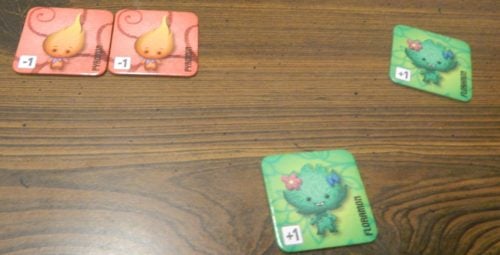 Hydromon: While everyone else closes their eyes, look at four of the tiles in the 3X3 grid and then turn them back over. 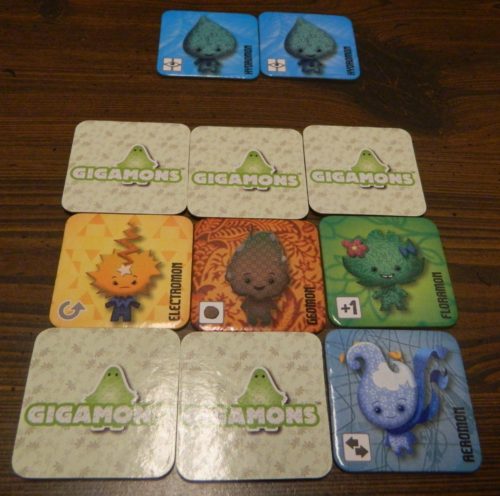 Geomon: Place a rock tile on one of the tiles in the 3X3 grid. No player may pick up the tile underneath the rock until the player who played it takes their next turn.

Aeromon: Swap one of the tiles in front of you with a tile in front of another player. The player who gets the ability gets to choose which tiles are swapped.

Electromon: The player gets an extra turn. 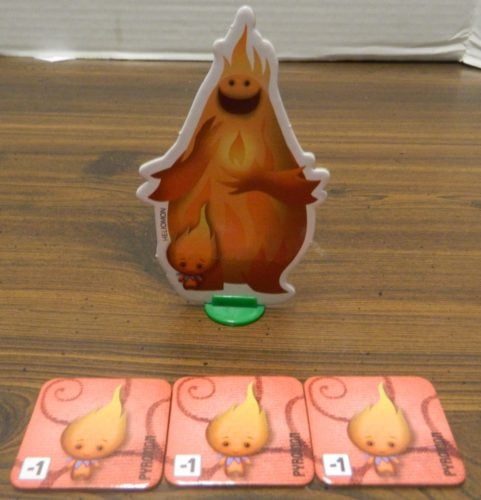 This player has acquired three Pyromons which they cash in to take Heliomon.

If the draw pile runs out of the tiles, the players continue playing until there are no more possible matches on the table. 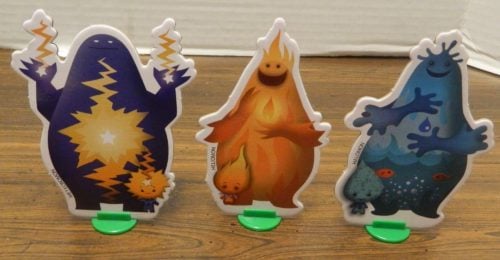 This player has collected three Gigamons and has won the game.

One board game genre that I have never been a huge fan of has been the memory genre. I don’t hate memory games but the problem with the genre is that rarely do games in the genre do anything new. Your basic memory game involves drawing two tiles and hoping that they match. That is basically all there is to most games in the genre. This is what intrigued me about Gigamons though since it actually does something new with the genre. This is why I would consider Gigamons to be one of the best memory games that I have ever played.

The unique mechanic that Gigamons adds to the genre are the special abilities you receive each time you make a match. Something that seems so simple actually adds a surprising amount to the game. The special powers add to the game by making it more than an exercise of memory and flipping over tiles. The powers vary quite a bit and actually change how you play the game. The special powers add some strategy to the game as they can mess with the other players or they can give you an advantage in getting your next match. The powers are straight forward so younger children shouldn’t have troubles understanding what they do.

The only small issue I have with the powers is that I think some are more powerful than others. Polymon is quite powerful since it always guarantees that you will get a match. Floramon is good since it gives you an extra tile. Hydromon is strong since it gives you a really good chance at getting a match on your next turn as long as the other players don’t take away the tiles that you looked at. On the other end of the spectrum Geomon has a very specific role and is not particularly useful outside of that role. I wouldn’t say that any of the powers are significantly more powerful than others but some have more general use while others are only good in specific situations.

While I didn’t play the game with any children I have to say that Gigamons would be the perfect memory game for children. The game is really easy to learn since it takes just minutes. The rules are straightforward as well. While an adult might have to supervise the first couple of games with younger children as they learn the rules, Gigamons is a game that children should be able to play by themselves. Gigamons is a game that adults should enjoy playing with their children though. I think Gigamons is a great family memory game as it is accessible for children and yet entertaining enough that adults won’t get bored.

Lengthwise Gigamons is a pretty short game. The game will take longer if you play with children but it will usually be a game that you should finish in ten to fifteen minutes. I like that the game is quick to play but I kind of wish the game was a little longer. At only ten to fifteen minutes there isn’t a lot of time for players to catch up. If one player gets out to a big lead the other players won’t be able to catch up. The biggest reason I wish the game was a little longer is because it would have made it easier to steal Gigamons from other players. I like the idea where you can steal Gigamons from the other players but it just rarely happens because the game ends too quickly.

I think Gigamons only somewhat significant issue is the fact that the game is not particularly difficult for adults. Using the game’s standard rules adults with just an average memory will find the game to be quite easy. Even if you have a bad memory it is not that hard to remember a 3X3 square. Basically whenever two tiles of the same type are revealed it is likely that the next player will make the match. This is the one reason why I might not recommend the game for people that don’t have any younger children to play the game with. The game is fun but is just too easy for adults.

It is kind of a shame that the game is too easy for adults because I think it is a great memory game. I actually wish an adult version of the game would be released. My one suggestion to make the game a little more challenging for adults would be to use a 4X4 grid instead of a 3X3 grid since that would make it little harder to remember where different tiles are located.

The only other issue I have with the game is the same problem that every memory game has. Turn order ends up being pretty important in the game. If you play after a player that regularly fails to make a match you have a significant advantage in the game. With only a 3X3 grid if someone fails to make a match it becomes pretty easy for the next player to make a match. It becomes much harder for other players if none of the tiles have been revealed for them since they then have to just guess what tiles to turn over.

For such an affordable game (less than $20) I have to say that I am quite impressed with the component quality of the game. All of the components are made out of cardboard but it is nice thick cardboard. I have to commend the game’s artwork. The artwork is really well done and is quite cute. I think children will really enjoy the game’s artwork. Honestly the only issue I have with the components is that I wish there were more tiles so the game would be a little longer.

Even though I am not a big fan of memory games I have to say that I was surprised by Gigamons. Gigamons is one of the best memory games that I have ever played. The simple addition of adding special powers when you make matches adds a lot more to the game than you would think. The game is easy and quick to play. The game has great artwork and I think children will really enjoy the game. The only real issues with the game is that it is too easy and too short. While the game is challenging for children, the game is too easy for adults.

If you hate memory games or would like a challenging memory game, Gigamons probably won’t be for you. If you are looking for a good children’s memory game though or a memory game that actually does something new I think you will really enjoy Gigamons and I would recommend picking it up.