Shuffle all of the cards and deal them out to each player based on the number of players:

The rest of the cards form the the draw pile. The top card is flipped over to form the sift pile.

If a player has all three single image cards of a particular color and there are two white trios of the same color currently played on the table, the player can make a Mummy Rummy Capture. The player shows the three single picture cards to all of the other players and then takes the cards from the two white trios on the table of the same color and puts them into their hand. The player then has to put the trios formed onto the table.

Since both white yellow trios have been completed, there is an opportunity for a Mummy Rummy Capture. If one player has all three yellow black background single picture cards they will be able to take both of these trios into their hands and form trios with the black background cards in their hand.

The game ends when one player runs out of cards in their hand or they are left with only one card and they choose to end the game. Each other player then gets one more turn. Each player’s score is then calculated as follows: 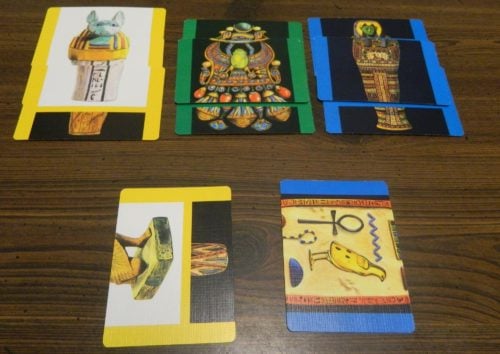 Even though there have been a bunch of Rummy games made in the past, I don’t know if I have ever played one before. Finding the game for only $0.25 I decided to give Mummy Rummy a chance since can you really go wrong at only a quarter? While Mummy Rummy is not a terrible game, it has some issues that lead it to being a below average Rummy game.

Mummy Rummy is a game gauged towards children and for the most part does a good job. The game is pretty simple with just a couple rules which are straightforward. You are just trying to find cards that when combined together form an Egyptian relic. Kids shouldn’t have any problems with this aspect of the game. The most difficult part of the game is figuring out which cards work together which is harder than you would think (more on this later).

The mechanic that I found to be the most interesting in Mummy Rummy was the idea of the sift pile. I found the sift pile interesting since it adds a risk/reward element to the game. If you take one of the buried cards from the sift pile in order to complete a trio you will get some points but you will also have to take a lot of cards which will be worth negative points if you don’t get rid of them before the end of the game. Early in the game it might actually be a good idea to take a lot of cards since it will put more cards into your hand which will allow you to make more matches. Doing it at the end of the game could be a bad idea though since you could end up losing as many or even more points than you would earn by taking the card.

The Mummy Rummy Capture is an interesting mechanic and it is necessary for the game. Without the Mummy Rummy Capture rule there would be stalemates in the game since the white trios and black trios use the same cards so there would be too many worthless cards in the game if two many white trios were formed. At times it seems a little too powerful though and leads to players mostly forming trios with the black backgrounds since they are safe from being taken by other players. It just doesn’t seem worth it to make groups out of the white backgrounds unless that is the only thing you can do since the extra ten points isn’t worth the opportunity of losing the cards to another player. If the white trios were worth a lot more points I think they would come into play more often.

Without a doubt the biggest problem with Mummy Rummy are with the cards themselves. The whole basis behind the game is obtaining the three cards that together form one of the images. You would think this would be quite simple but it is much harder than you would expect. Unless you play the game a lot it is hard to figure out which cards are supposed to go together unless you reference the instructions which show what all of the images are supposed to look like. This is a game meant for children and yet it is sometimes hard for adults to figure out what cards go together. If the shapes were a little more distinct it would be easier to see which cards went together. Without constantly referencing the rules it is very easy to think two cards go together when they actually don’t.

Another problem with the game is that the end game takes way too long. Once the draw pile runs out of cards the game grinds to a halt. Usually players just end up taking the last discarded card and then adding a new card to the sift pile. Players end up just trading cards between one another. If everyone can remember what cards the other players need, this could theoretically never end. The only way the game ends is if one of the players make a mistake and discard a card that one of the other players need.

Overall the components are pretty much what you would expect. The artwork on the cards is well done even though it makes the cards sometimes hard to match up. The card stock is typical of Gamewright games. The game is quite small which is nice for space conscious people.

Mummy Rummy is a very average Rummy style game. The game has some interesting ideas and is fun at times. It is much harder to find cards that go together than you would think. Mummy Rummy could have done a better job making the shapes more distinctive so you could tell which cards went together. The end game also takes way too long as players essentially just trade cards with one another.

If you don’t particularly care for Rummy style games I don’t think Mummy Rummy will be for you. If you really like Rummy games or the theme though and can find the game for cheap it may be worth picking up.