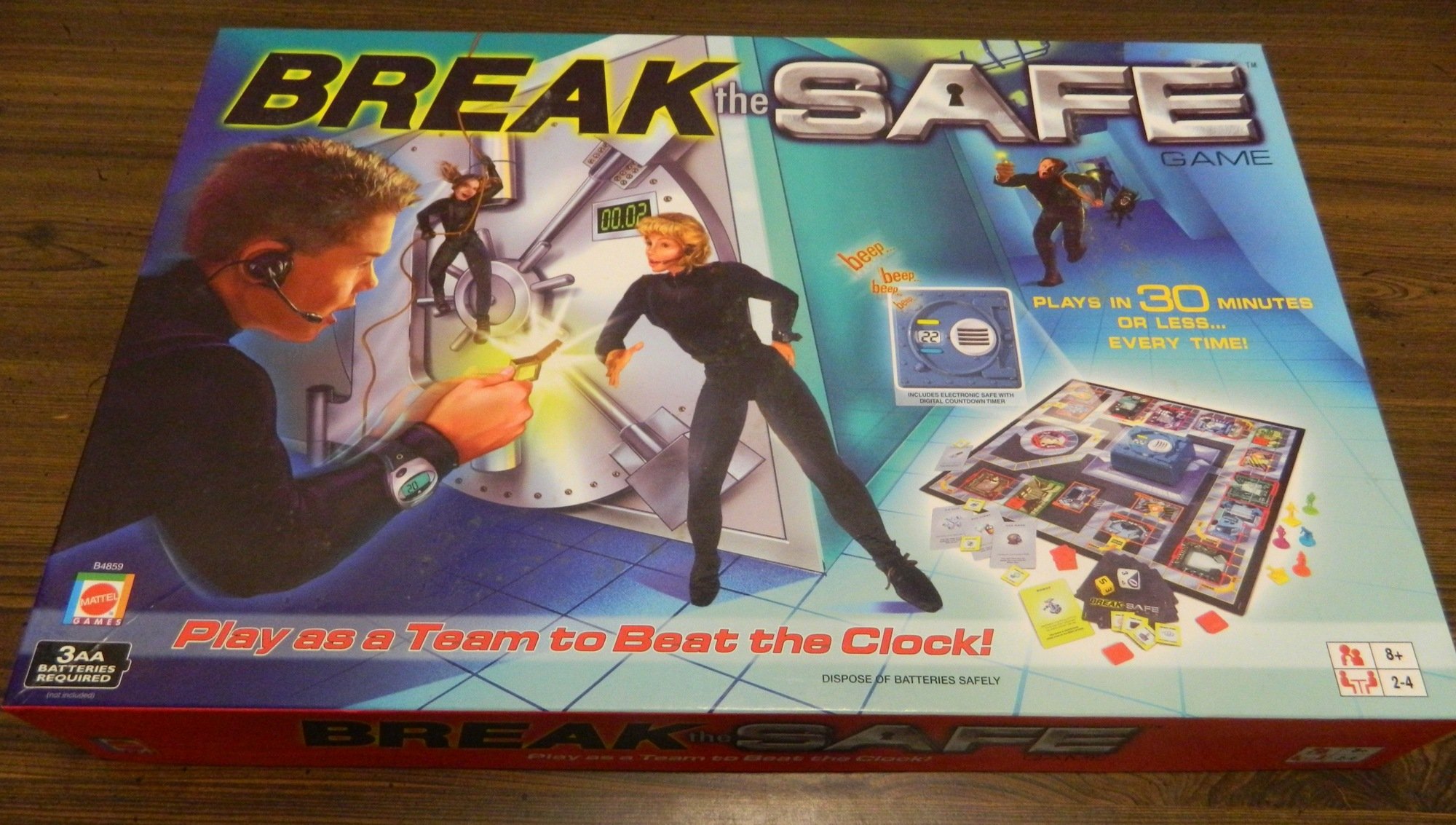 Each player selects an agent pawn and places it into the center room. Place the guard token in the guard room and the dog in the dog kennel. Place a red top secret tile face down on each room with a red outline without any player seeing what tile it is. Place a booby trap tile face down on top of each top secret tile. Shuffle all of the tool cards other than the robot card and deal them out to each player face up. Set the timer to the start position (knob to the left position) and press the green button to start the game. Play starts with the player using the blue pawn. The player to the right of that player starts with the robot.

On the beginning of each player’s turn they roll the ten sided die and move their agent that many spaces. If the guard and/or the dog is patrolling the gameboard, the player will also roll the yellow die. A player can choose to either move all of the spaces of the roll or not to move at all. You can move in any direction but you can not go through the same space twice on your turn. Other rules regarding the movement die are as follows:

In addition to moving, players can play a card to disarm a booby trap. Most of the cards dealt out at the beginning of the game are used to disarm booby traps around the board. Some of the items are used to affect the guard/dog. When a card is played it is discarded from the game. When a player enters a room they flip over the booby trap card to see what booby trap is guarding that room. If a player has the item that disarms the booby trap in their possession they can play the card and get rid of the booby trap. If the player doesn’t have the item they can leave the room on their next turn. All but two of the booby traps are disarmed by playing the associated card. The 500 pound weight booby trap is disarmed when two players are in the room at the same time. The Ring of Fire is disarmed by sacrificing the robot which means that it can no longer be used during the game.

If you don’t sacrifice the robot it can be used to move cards between the players. On a player’s turn they can use the robot card to move one of their cards to another player. Whoever holds the robot card is the only player that can use this ability. Players can choose to just send the robot by itself without another card. If you are in jail you cannot send or receive anything from the robot.

When the booby trap is disarmed in a room, the red tile in that room is flipped over to reveal what is on the other side of the tile. If the symbol on the tile is a key, the player who cleared the tile puts it in front of them. The players need to collect all four keys in order to win the game. If a player flips over a tile that features a hidden passage, the tile stays in that room and becomes a secret passage for the rest of the game. If the tile shows a person getting stunned, all people in that room are stunned and lose their next turn. Finally if the tile is blank, nothing happens.

The Guard and Dog

When a player rolls the guard symbol on the ten sided dice, the guard enters the gameboard outside their office.

On the next player’s turn they will roll both dice and will move the guard the number of spaces rolled on the yellow die. The guard follows the corresponding arrows on the gameboard. If the guard is currently on the gameboard and another player rolls the guard symbol, the guard returns to their office. If a player is in the same corridor as the guard, they will see the player and send them to the jail space. A guard is in the same corridor as a player if there is a straight line between the player and the guard.

If a player rolls a dog collar symbol, the dog enters the gameboard.

The dog moves based on the number rolled on the yellow die and follows the corresponding arrows. If a player rolls the dog collar again when the dog is out on the gameboard, the dog returns to the kennel. If a player is within six spaces of the dog at any time, they are sent to the jail space.

The guard and dog are moved before the player can move their piece. The guard and dog cannot see or smell into rooms. If a player moves within the range of a guard or dog while moving, they are sent to jail.

A player can get out of jail in three ways.

If there are three players, the players only get 22 minutes to finish. If there are two players they only get 15 minutes. To change the time on the timer, players need to press the program button in order to change the starting amount of time.

Break the Safe is a game that I have seen regularly at thrift stores but have always passed on since it looks pretty childish and I am not a huge fan of roll and move games. Recently I found Break the Safe at a thrift store for a quarter so I thought I really couldn’t go wrong and picked it up. While it is not fantastic, I have to admit that Break the Safe is better than I was expecting.

I think the best way to describe Break the Safe is as a beginner’s co-op game. The co-op genre has been really growing in popularity recently and I really like the genre since it is fun to work together towards a goal instead of always competing against the other players. Break the Safe is a combination of a roll and move game and a co-op game. The players work together to gather keys in order to unlock the bad guy’s safe within a given amount of time.

The main reason I call Break the Safe the “beginner’s co-op game” is that the game is gauged towards children with simpler rules than most co-op games. Since the main mechanic is rolling the dice and moving, the game is easy to teach to children or people that don’t play a lot of board games. If you have younger children or want to get someone into co-op games, Break the Safe can be the game that you are looking for. While the game has a recommended age of 8+, I think younger children can play the game with some help from adults.

Generally I am not a huge fan of roll and move games but I think Break the Safe is one of the better roll and moves that I have played. This is because the game plays differently than a lot of roll and move games. It is a co-op game but is also a speed game. There is some strategy in avoiding the guard/dog but speed is the biggest factor in the game. You can spend a little time figuring out what to do next but you can’t sit around wasting time since you have a limited amount of time. You need to make quick decisions and just go with them. The ticking timer adds tension to the game as you see the time tick away. The game can get pretty tense when you get down to the last couple of minutes. When you first play the game you think you have plenty of time but the game moves much faster than you would expect. While I like speed games, people who don’t like to be rushed might find Break the Safe to be too chaotic.

Overall I would have to say that Break the Safe is probably on the easier side of co-op games. In the game I played we ended up losing but I still think the game will be pretty easy to win. We played the game with four people and had some of the worst luck you could have had. Two players were constantly getting caught by the guard/dog due to bad luck. Also we had to clear every single room to find the last key. With all of that we still almost won the game since we got all four keys and three of the players got back to the finish space. One player (myself) didn’t get back in time since I was sent back to jail again. If there was about one more minute left on the timer I think we would have won the game. Outside of maybe your first game, you should win most games except for when you have terrible luck like we did.

The one thing I don’t like about the speed element of the game is that you usually waste more time moving the guard and dog than you do actually moving your own pieces. One player that isn’t the current player has to move the guard while another player has to move the dog. While this is going on the currently player has to figure out what they are going to do. I think too much time is wasted moving the dog and guard but there really isn’t anything the game could have done to make the process quicker.

I had quite a bit more fun with the game than I was expecting but it is far from a perfect game. The game is made more for families with children so it may not be the most engaging game for adults. I think most adults can still enjoy the game but I know it won’t appeal to everyone. The game is kind of simple so most people will probably want to move onto a more complex co-op game after playing Break the Safe for a while. I see Break the Safe as the type of game that you will only play every so often.

For a Mattel game I have to admit that the components are actually quite good. I like that all of the pawns are different and look a lot nicer than you would typically expect. The artwork, while a little on the childish side, is still well done. The timer is also quite nice and the sounds played as the clock ticks down really add to the atmosphere. I wish the timer would have let you set your own time though instead of relying on preset times. This could have given a challenge to players that have played the game quite a few times. I also think the timer should have had a pause button in case something comes up which forces the game to be paused especially rule clarifications during your first game.

California Board Game Review and Rules

2 thoughts on “Break the Safe Board Game Review and Rules”