The gameboard is set in the middle of the table with one corner pointed at each player. Each player then takes the hats and a launcher of the color opposite of them. Each player places their launcher at any distance from their corner of the gameboard as they want and places one of their hats on the launcher.

The game is played in rounds. All players play the game at the same time. Players launch their hats as quickly as possible at the section of the gameboard that matches their color. When one player has launched all six of their hats, they call out “hats off”. When someone calls “hats off”, all of the other players need to stop launching hats. Hats already in the air after “hats off” was called, will still count if they land in a scoring zone.

Players score points for the round based on where their hats landed:

For each hat that a player lands in one of the spots of their own target area, they get five points. 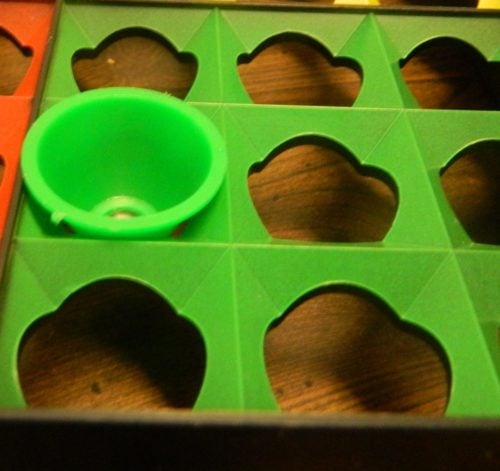 For each hat that a player lands in one of the spots in their own target area on top of another hat, they get ten points. 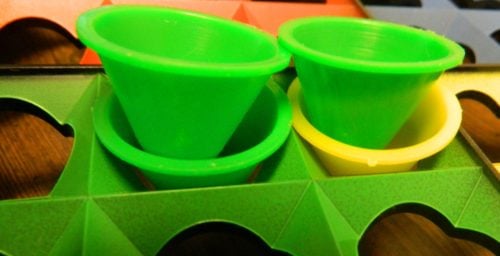 The green player got three of their hats in their section of the gameboard. The hat on the bottom is worth five points. The two hats on top of other hats are worth ten points each.

After every player has recorded their score on their launcher, a new round begins. 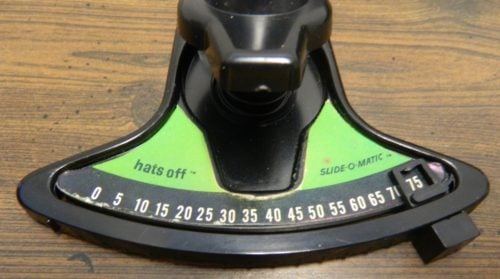 The green player has reached 75 points and has won the game.

Before playing the game I wasn’t expecting much out of Hats Off. There have been so many of these children’s “launching games” made over the years. Even though the games rely almost entirely on luck, I generally enjoy these type of games because they are just simple fun. I wasn’t expecting much from Hats Off though because I really didn’t think it would add anything to the genre. I thought newer games in the genre would be better since they should have improved on the game in the 40+ years since the game was released. While Hats Off plays just like all of these other games, I have to say it kind of surprised me.

Hats Off is far from a deep or strategic game, but I still had fun with it. It is satisfying shooting the hats and trying to get them to land in your section of the gameboard. The game is so simple since all you do is load the hats on the launcher and launch them towards the gameboard. It takes just a minute or two to learn how to play the game. Hats Off is the type of game children of all ages could play and have fun. I found Hats Off to be more enjoyable than a lot of children’s games that try to appeal to adults as well. If you don’t generally like these type of games though, I doubt you will like Hats Off either.

One of the things I like most about Hats Off is how short the game is. Unless all of the players are terrible at the game, a game should only last five to ten minutes. Hats Off is the type of game where you can easily play several games within 15-20 minutes. The games are short enough that if one player falls behind quickly they won’t have long to wait for the next game. Fifteen to twenty minutes is the ideal amount of time for Hats Off since if you play the game for longer than that the game can start to get a little boring. I personally would play the game for a short amount of time and then put it away for a while before playing it again.

While I had fun with Hats Off, it is far from a perfect game. Like all of these children’s games there is a high reliance on luck. You have control over the aim and strength of your shots which can impact the game. The launchers aren’t particularly accurate though so while you can aim I think luck plays just as big of factor in how successful you are.

This reliance on luck is accentuated by the emphasis of speed in the game. If you want a chance at winning the game, you need to shoot your hats quickly. Since you can only shoot until one player has shot all of their hats, there really isn’t much time to aim your shots. You are better off just trying to shoot your hats as quickly as possible since you have a chance at getting the five bonus points and preventing the other players from shooting all of their hats.

The one thing I do like about the emphasis on speed is the fact that it fixes a problem that plagues a lot of these type of games. In most of these games there is a problem of the pieces going all over the place. When you miss your target you or another player has to waste so much time retrieving pieces when they otherwise could have been shooting. This isn’t an issue in Hats Off since you only can shoot each hat once each round so there is no need to retrieve the hats until the round ends. This means none of the players have to waste their time retrieving pieces. The hats can go flying all over the place but you can find them after a round has finished.

I think Hats Off is a game that could be improved with some house rules. The game has a good base but some interesting house rules could make the game much more interesting. In addition to changing how finishing first is handled, I think some tweaks to the scoring system are warranted. Some options include giving points for landing hats in other player’s zones (not as much as your own zone) or only rewarding points to the player with the top hat in each space. Sometimes it is hard enough to get a hat into any scoring zone and some alterations to the scoring system could maybe take some of the luck out of the game.

For a game that is over 40 years old the components stand up better then you would expect. The gameboard and other components are kind of bland but serve their purpose. While the launchers can be a little finicky, for being over 40 years old they work better than you would think. The scorekeepers on the launchers are also pretty nice. Space conscious people may hate Hats Off though because the box is quite large and could have been easily been made smaller to take up less room.

Hats Off was better than I was expecting. Despite having little to no strategy and a high reliance on luck, I had fun with the game. There is just something about the game that is fun to play. It is the type of game that you would only want to play for 15-20 minutes at a time and then put it away for a while before playing again.