A players’ turn follows this sequence:

Play Cards: Players can either play 1-3 cards or they can discard 1-3 non-disciple cards. When playing a disciple card, it must be placed next to at least one other card on the table.

Princess Iron Fan: If a player plays a Princess Iron Fan card they are able to move a disciple card (with a players’ token on it) from one place on the gameboard to a new location. The card needs to be moved next to another card on the table. The player whose playing piece is affected is able to play either a Buffalo Demon King or Guanyin card in order to cancel out the movement.

After all cards have been played no cards can be separated from the other cards. If this happens the cards are adjusted so all cards are attached to at least one other card.

Move Playing Piece: After all cards have been played, the current player can move their playing piece either one card horizontally or vertically. A player does not have to move their token. The player can not move to a card occupied by another player.

Check If Round Has Ended: A round ends in one of two situations. If the card deck is depleted the round ends. A round can also end when one player (might not be the current player) is at the intersection of a continuous group of all four different disciples vertically and horizontally. An example picture is in the scoring section.

Draw Cards: A player draws enough cards until they have three cards in their hand.

Scoring: At the end of the round scoring takes place. If someone met the condition of being at the intersection of two continuous four card unique lines, that player gets to score first. The player scores points equal to the number of scrolls present on the cards in the vertical and horizontal lines. Any red/orange circles are worth negative three points. The player double counts the space their playing piece resides on. All of the other players will score points for the continuous unique cards (up to four) both vertically and horizontally but they only count the card their piece is on once. If there are multiple groups of cards that these players could score, they choose whichever one produces the most points. If a player has earned negative points, it is treated as a zero with regards to the scoreboard. After tallying scores everyone adds their points to the scoreboard. 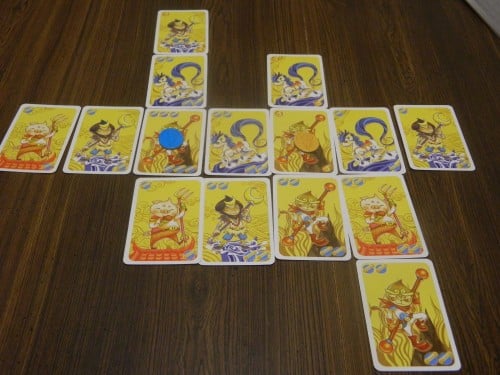 Ending the Game: When the designated number of rounds have been completed the game ends. Whoever has the highest score wins the game. If two or more players are tied, they share the victory.

Mountain of Inferno is a card game created in 2009 by Ta-Te Wu which is inspired by the classic Chinese novel Journey to the West. In the game, players try to use disciples in order to protect Xuanzang from the evil Buffalo Demon King family so he may continue his journey west.

Mountain of Inferno is kind of a mix of pattern recognition, area control and a typical card game. Essentially all of the players try to play cards to help build sets of unique characters around their own piece while also messing up the sets the other players are trying to build.

Mountain of Inferno is a light to moderately difficult card game. The game is not hard once you fully understand it but it has a learning curve. Generally it takes at least a couple of hands for every player to fully understand what they are doing. Players will probably make some mistakes as they are adjusting to the game. The more you play the game the easier it becomes though. I believe after a couple rounds/games players should know what they are doing and have no further troubles understanding the game.

I would say that Mountain of Inferno has a moderate amount of strategy. If you don’t play your cards right you either won’t maximize your own points or you could even boost the other players’ scores. As far as an optimal strategy, I really haven’t come up with one yet other than trying to position your playing piece on a three scroll card so you have the opportunity to double score that card. Otherwise your strategy comes down to what cards you draw which means the game has a moderate amount of luck involved.

Playing strategically is important because it is possible that the person who ends a round will not score the most points. Before ending a round, players need to carefully look at the board to make sure that they are either scoring the most points or close to the most points since you don’t want to end the round if other players are going to be scoring a lot more points than you.

As far as the scoring goes I think it could have been slightly improved. Other than being able to double count the card their playing piece ended up on, the player who ends the round doesn’t get any other advantages. I think the player who ended the round should have either gotten bonus points or the other players should have gotten a slight penalty. How the scoring system is currently set up, there is no reason to end a round if you currently don’t have the most points.

Another issue I had with the game is that the game tends to favor whichever player gets to go first. They get to place their playing piece first which could be quite advantageous. The player also gets to play their cards first and since the round can end at any time, the first player will always have at least as many turns as all the other players. The first player could also end the round on their first turn not letting the other players even get a chance to play a card. In the game I played the third player in one round was never given the opportunity to even play a card.

In most games the special cards are usually the best cards in the deck. The special cards in Mountain of Inferno can be helpful in certain circumstances, but I found them to be more of a nuisance than anything. These cards tended to clog up your hand preventing you from drawing the disciple cards that you actually need to win the game. I ended up sometimes playing the cards just to get rid of them even though playing them hardly helped me.

The game has a decent amount of strategy but I would still consider Mountain of Inferno to be a filler game. The game has an expected playtime of 30 minutes but based on my experience it seems like more of a 20 minute game. The short length is a strength in my opinion since the game doesn’t seem to drag on. The game also has a zen-like feel to it. While you are trying to beat the other players, the game is pretty relaxing.

I played the game with three players and I think that is the optimal number. The game can support four people but I think the game will become kind of hectic with that many players since there will be a lot of cards on the table and each round might start to drag on. I actually think it would be interesting to try the game with two players. With two players the game might take on a chess-like feeling which might be quite a bit different experience than the three player game.

The theme of Mountain of Inferno is pretty interesting. There really aren’t that many board games in the market inspired by Chinese culture. The games instructions try to build up the theme of the game but unfortunately it only translates to the game with regards to the artwork on the cards. If you changed the artwork on the cards, the theme would be gone entirely. You could place any theme on the gameplay and it wouldn’t really feel any different.

The components are kind of hit or miss.

I like a lot of things about the cards but they have some issues as well. If your interested in the theme you will probably love the artwork. The artwork is quite stylized and is well done. The style will not be for everyone though. The biggest problem I had with the cards is that the non-disciple cards could have either used some text or at least a symbol to indicate what each one did. After multiple plays this will probably not be much of an issue but it does make teaching/learning the game quite a bit harder as you need to keep referencing the rules to figure out what each card does. I am guessing the designer left these out on purpose to keep the card cleaner but I think that was a mistake. In addition I think the game could have color coded the backs of the disciple cards which would have made it much easier to determine how many unique cards in a row each player has.

While they aren’t terrible, the instructions could have been written better in my opinion. Playing the first game, I had to refer to the rules a lot more than I would like since some of the rules were not totally clear the first time I read through the rules. The rules could have done a better job in particular describing the “intersection” rules. As I already mentioned though, after you play Mountain of Inferno for a while you start to pick up the game and the instructions aren’t a big issue.

The scoreboard is a little small and I thought it should have just gone from left to right instead of snaking back and forth. This made score keeping more complicated than it had to be. Our group almost made a couple mistakes with scoring do this winding back and forth since most games go left to right.