Judge For Yourself is a 1996 Pressman legal trivia game which has players trying to guess what the courts decided in 500 real-life court cases from around the world. The game is very simple to play but unfortunately has some serious problems and isn’t really that fun to play.

To start the game, players divide into two teams with as equal a number of players as possible. One team rolls the dice to determine how many points the first question will be worth, draws a card, and reads that card’s case to the other team. The other team is the answering team. After the question is read, they discuss what they think the ruling in the case was and announce their group verdict. Afterwards, the real verdict is read aloud and if the answering team was correct, they get the amount of points indicated by the dice and mark off that amount on their scoring track. If their verdict was incorrect, the reading team gets the points instead. The first team to mark off all the spaces on their board (15 spaces) wins.

As an example question, here is one of the court cases on one of the cards (the funniest one we got during our game):

“In 1910, Gilligan owned a herd of cattle that was being driven from the Cattle Market in Glasgow to his farm by a young boy he had hired. The boy was inexperienced and needlessly set a dog after a certain cow. The frightened cow rushed from the street, up a hill, and into a house. A woman holding her three-week-old baby was suddenly confronted by the cow in her kitchen and suffered a severe nervous shock, for which she filed suit against Gilligan. Did the court rule FOR or AGAINST Gilligan?”

Team A asked the question so team B will be the team to answer the question. They discuss and decide that Gilligan was at fault for hiring an inexperienced employee so their group verdict is “against.” The correct verdict is “the court rule AGAINST Gilligan and held that he was liable for the suffering of the woman because he had hired an incapable individual to execute the task of driving the herd of cattle” so team B will get the amount of points indicated by the dice roll. 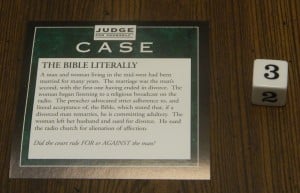 This is another example of a Judge For Yourself court case card. A three was rolled so the answering team will earn three points if they give the correct verdict (otherwise the reading team gets the points).

We thought the team-based game play was stupid (especially because only one of the teams answers the question and the other team has nothing to do until they decide on their verdict) so we made up our own rules for individual play. Someone still rolls the dice and reads a case but everybody writes down their own answer (including the reader since the answer is on the back and can easily be avoided) and reveals them when everybody is ready. All players with the correct answer get 1-3 points based on the dice roll. It helps the game a bit but Judge For Yourself is still a deeply flawed game.

Even though I like trivia (and hope to eventually become a competitive trivia player) and am somewhat interested in legal systems and the law, I have to say that Judge For Yourself is a terrible game. The game has some mechanic problems, but mainly is just plain boring. The entire game consists of players reading boring court cases (except for the cow one from earlier) and figuring out what the court ruled. That is just plain boring unless you are really interested in the law (in which case you probably know all the answers anyway).

The cases on the cards come from all over the world and from different periods of history but, unfortunately, this is actually somewhat of a negative for the game. While having cases from the early 1900’s and from countries like Scotland adds some variety (and allows for some funnier and more interesting cases), it also adds a lot more randomness to the game. Players often need to factor different legal systems and time periods into their verdicts. For example, there used to be a time when Americans used to enjoy a few more rights than they do now and the legal system hadn’t yet become somewhat corrupted. Also, certain countries are more liberal than others and some jail people for only doing minor things wrong. If all of the cases came from the ’80s on and just from America, if you know the law it shouldn’t be too hard to guess the correct ruling. Adding in old cases when the legal system was completely different (and better) adds something else to factor in and thus adds some more randomness to the game.

Judge For Yourself also made some poor choices when it comes to game play. I personally think the version we played (see the how to play section of this review) was better and we just threw it together in a minute after we played a few hands with teams. An even funner game might have been ignoring the actual verdict completely and just answering with your opinion of what the verdict should be. In this case, all players agreeing with the majority would get a point.

The game’s mechanics are just poor all-around. Giving a team points for doing nothing if the answering team answers incorrectly is just plain stupid. Why do they deserve points for reading a question and getting lucky that the other team messed up their answer? The answering team is punished enough by just not getting any points for a wrong answer. I hate games that give out points for doing nothing. Also, rolling the dice to determine how many points you get just adds more randomness and luck to a game that should be just about your legal knowledge. Trivia games should be skill games, not games that rely heavily on luck. In addition, the paper “boards” you cross off as you earn points are stupid and wasteful (all you have to do is count to 15, why do you have to waste paper?).

Also, the cases in Judge For Yourself take forever to read and the other team (or players if you play individually) will almost certainly miss important information and have to read the card themselves anyway. Most of the cards probably could have cut the paragraph in half in terms of length and the key information still would have been provided (and maybe the questions wouldn’t have to be read twice to get all the key information).

Finally, how do you make a legal trivia game and not include a gavel? Somehow Judge For Yourself either forgot to include this essential piece of equipment for any legal game or was too cheap to do it. Either way, a legal game without a gavel is unacceptable.

Basically the only positive thing I have to say about Judge For Yourself is that it comes with a lot of cards (500). At most you will probably go through 25 cards a game (probably fewer) so that is at least enough for 20 games. That’s quite a good value. Unfortunately, the game is so boring that you probably won’t get through more than ten of the 500 cards before you are bored out of your mind.

Judge For Yourself is a terrible legal trivia game mainly because of how boring it is, but it also has some serious flaws in the game play (and is way too simple to begin with). I’m confident that the only people that might get some enjoyment out of it are trivia buffs who are particularly interested in the law and legal systems. If you aren’t a trivia buff obsessed with the law, stay far, far away from the boring Judge For Yourself.