Somethin’ Fishy is a 2004 press your luck card game from SimplyFun. The objective of the game is to gather as many fish cards as you can without getting them eaten by “hungry fish” or sharks. That means you have to press your luck but still make sure you stop before you lose everything.

According to the rules, the person who most recently went fishing gets to go first. They draw a card from the pile and if it is a “happy” fish card (which most of the cards are), they lay it down in front of them to start a “string” of fish. They then continue to draw cards until they get a “hungry” fish card, shark, or decide not to press their luck any further. When any of those things happen, the player to their left now gets their turn (this continues for the rest of the game). Each time a player draws a happy fish card, they compare it to the last fish in their “string.” If it is either the same size or type of fish as the fish at the tail end of their string, they get to keep it and place it at the end of their string. 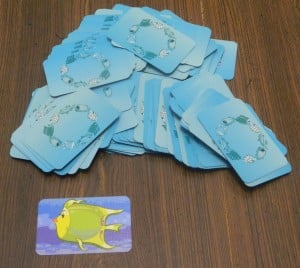 This player drew a large angel fish and started their new “string” with it. They can now press their luck and try to draw another angel or large fish of any type or bank their one card. 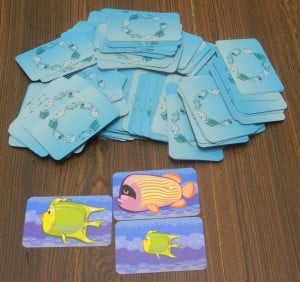 If the happy fish isn’t the same size or type of fish, they must pass it to the player on their left. If the player on their left either has no fish cards in front of them or it matches the size or type of fish at the end of their string, they can take this card and put it at the end of their string. If not, they pass it to the next player. This continues until the fish card can be legally added to someone’s string. If it can’t be added to any player’s string (this happens very rarely), it simply gets discarded from play. 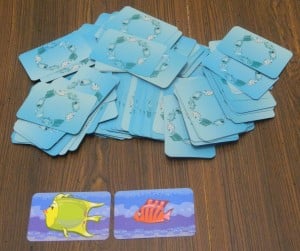 On the other hand, if the player draws this small grouper fish, they don’t get to keep it (it isn’t the same type or size of fish). The small grouper fish card will be passed from player to player until it fits into someone’s “string.”

Whenever a player draws a hungry fish card, it eats all of the fish in that player’s string until it finds a fish of the same species (the fish in this game aren’t cannibals after all). For example, Bob has a string consisting of two grouper fish, an angel fish, a tang fish, and a trigger fish. He draws a hungry angel fish card. This fish will eat the trigger fish and the tang fish but not the angel fish or the two grouper fish that are before it in the string (it stops as soon as it finds one of it’s own kind and doesn’t eat any subsequent fish even if they are a different species). After the hungry fish has eaten all the cards in the string, the entire string and the hungry fish are placed face up in the middle of the table (with the hungry fish on the top of the pile). Drawing a hungry fish card also ends a player’s turn. 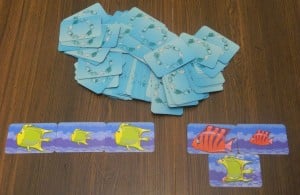 After successfully drawing a pretty long “string” of fish, this player finally drew a hungry fish. Since it is a hungry angel fish it eats both of the grouper cards at the end of the line. The next card in line is an angel fish so it stops there. It just eats the two grouper cards and this player will get to keep the three angel fish at the beginning of their “string.”

There are also three shark cards in Somethin’ Fishy. If a player draws one of them, the shark eats their entire string of fish. The shark and the string of fish are discarded into the box and that player’s turn is now over. With all the nasty hungry fish and sharks in the dark, you might want to protect your fish from danger. If at any point you want to “bank” the fish you have in front of you and don’t want to press your luck any further, you can simply stack them all up and place them in your score pile. This does end your turn, however, and you will need to start a new string of fish.

When all of the fish-backed cards have been drawn, this is when the water-backed cards come into play. Play continues in the exact same way but this time players are drawing from the 20-card deck of water-backed cards. Whenever a player draws a net card, the game ends immediately (any fish still on the table score zero points for their player). The winner of Somethin’ Fishy is the player with the most cards in their scoring piles. If there is a tie, the tied players count the number of hungry fish they have and the player with the most is the winner. If the game is still tied, the winner is the player who can tell the biggest fish story (yes, that’s the actual second tiebreaker). 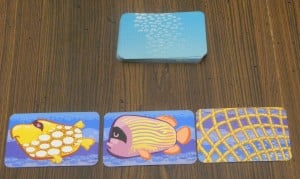 This player drew a net card which ends the game. They don’t get to bank the two fish still on the table.

My thoughts on Somethin’ Fishy depend completely on who you plan to play the game with. If you play with gamers who want serious, strategic games and won’t accept anything else, Somethin’ Fishy is definitely not for you. However, if you just want a quick, easy to play card game to play with your family (especially if you have younger children) it is a pretty solid choice.

Somethin’ Fishy is basically just a press your luck type game. Technically, there are decisions to be made (whether to press your luck or play it safe) but the game is completely luck-based with no right or wrong strategy. In some games, the player who simply draws a few cards per turn and banks often will win. In others, someone who takes a lot of risks will ride an incredible streak of luck to victory. You just basically pick cards and try to stop before a hungry fish or shark appears. That’s all there is to the game.

Usually you don’t even have decisions to make. In many of the games I’ve played, one player quickly took a big lead which forced their opponents’ to draw more and more cards (we no longer had the option of being conservative since we needed to make up ground). Indirectly, this actually winds up helping the rich get richer. The player next to them will be drawing a lot of cards and many of the fish they draw won’t fit into their string. Thus, those fish will often times be given to the 1%-er for free (in some cases, that player will have so many fish they will simply just bank all the free cards they got when it’s their turn). It’s also very good to sit next to a heavy gambler. The more cards the player next to you draws, the higher chance of you getting free fish cards (with none of the risks of drawing them yourself).

The art is pretty solid overall. The fish are colorful and even though there isn’t a ton of different art (there are only fourteen different pieces of art on the cards and most of them are just slight modifications of the main four fish types), I think it’s pretty good overall. One minor problem I had was that in the first game or two you play, you might struggle to figure out what size the fish are on some of the cards. In particular, the small tang fish card looks almost the same size as the large versions of the other fish. This is very nitpicky and will only apply to your first game or two but I wish the small tang fish card was drawn a little bit smaller.

One of the great things about Somethin’ Fishy is how easy and quick it is to learn and play. In the instructions, SimplyFun has a nice quick rules section that can be read in two minutes and explained in less than five. They also do a good job of further explaining the rules in the subsequent pages if you need some examples or a bit more help. While a lot of games take half an hour to read the instructions all the way through, you can be up an running in five minutes with this game. Since games of Somethin’ Fishy usually take fifteen minutes or less to play, you will be on your second game before you finish reading the rules of a lot of other games.

Since the game is ridiculously easy to learn and play, it makes for a great game for younger children. The game says it’s for ages six and up and I definitely think that even that young of children should have no problem playing this game. They will probably enjoy themselves quite a bit since it is a very kid-friendly game. My rating might look a little low (since I grade games based on how I feel an average player would feel about it, not necessarily it’s target demographic) but if you plan to play Somethin’ Fishy with young children, consider adding a full star (or even more) to my actual rating (2.5 out of 5).

While I think this game is great for families, I personally just thought the game was average. While every game I play doesn’t have to be a serious, strategic game with a lot of interesting decisions to make, Somethin’ Fishy still comes up a bit short. I somewhat enjoyed playing it but I just wish there were a few more mechanics outside of drawing cards and predicting when a hungry fish or shark is going to come up.

Somethin’ Fishy is a completely luck-based press your luck card game. However, that doesn’t mean it’s terrible. The game is quick and easy, which makes it great for families with younger children or a pretty decent choice for an appetizer game (a quick and easy game to play before or after your main game for the night). While my actual rating is a 2.5, consider it a 3.5 if you want a game to play with your family. Otherwise, only pick it up if you find it on the cheap.