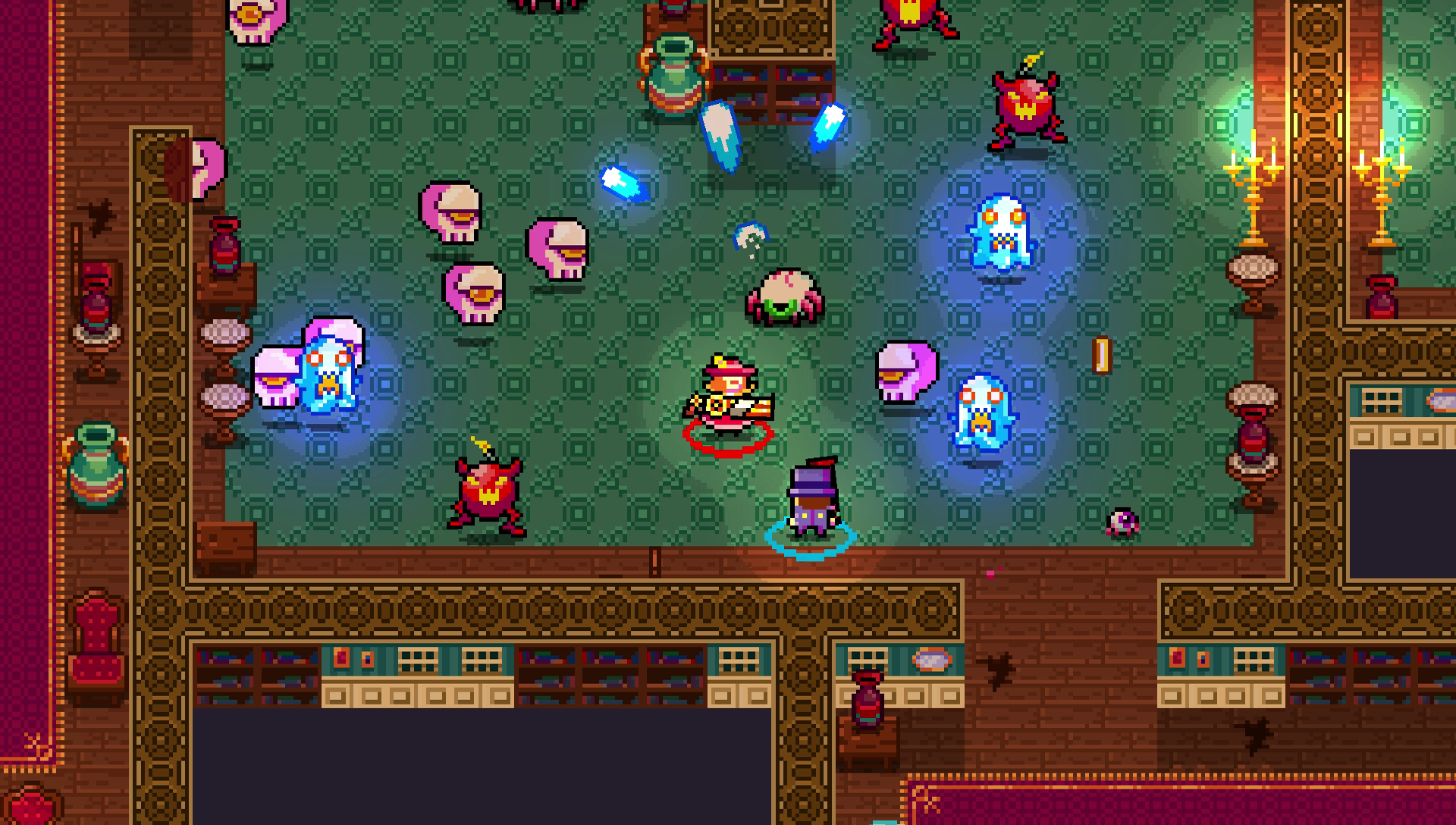 In Monsters and Monocles you and up to three of your friends play as paranormal investigators tasked with fighting the forces of evil released by an occult collector. If I had to classify Monsters and Monocles I would say that it is a combination of Borderlands (large number of guns and a robot sidekick), a roguelike, and a twin-stick top down shooter. Your basic goal in the game is to complete your objectives to finish a level without dying. Like roguelikes when you lose all of your lives you lose all of the weapons and money you have acquired in the game. The game is a little more forgiving than a lot of roguelikes though because you collect relics throughout the game that stay with you even after death. These relics can be upgraded throughout the game so your characters continue to get stronger.

The basic setup of a level involves two stages and then the final boss. To begin you choose which “world” you want to play. This determines the setting and the types of enemies you will face. You begin each level with a stage that has a randomly generated objective. For example some objectives include killing a certain amount of enemies, finding a certain item, or killing all of the creatures of a specific type. After finishing the first stage you go to a store where you can use the money you acquired in the first stage. After the store you play another stage where you have to complete a new random objective. Finally you face a boss that is specific to the world you choose.

At this point the game has three different worlds to choose from with the game eventually having six worlds. Other than the boss at the end of a level, everything seems to be randomly generated from the level layout to the objectives. The objectives are randomly chosen which usually involves finding a certain item or killing a certain number or type of creature. The randomization of objectives gives each level more replay value since the levels shouldn’t ever be the same. I hope the final game has a few more types of objectives though since the same types of objectives seem to come up a lot. The procedural generation seems to work quite well for the level layouts. The levels feel unique and I haven’t encountered any situations where I was unable to access a part of a level.

The one thing that isn’t randomly generated are the boss fights at the end of each level. I have played all three boss fights currently in the game and I enjoyed all three. One of the bosses was pretty challenging and I wouldn’t have survived it if I didn’t have a lot of lives left for it. The other two boss fights were kind of on the easy side though. I give the game credit because the three boss fights did feel quite a bit different from one another.

Like most twin-stick shooters, the controls in Monsters and Monocles are quite simple. One control stick controls movement of the character while the other controls the direction you shoot in. The game also includes a button that picks up items, the trigger buttons make the player dash, and there are buttons that let you switch between the two guns that you can hold at a time. While the game has keyboard controls, like most twin-stick shooters I would highly recommend using a controller. The controls work well since I can’t think of a situation where the controls weren’t responsive.

So let’s get to why I think this game somewhat reminds me of Borderlands. While the game doesn’t have nearly as many different types of guns as Borderlands, it still kind of has that type of feeling to it. Currently the game has around 10-20 different types of guns. The game also includes upgraded versions of each type of gun. The guns for the most part differ in the number of bullets shot at a time, the damage each bullet does, the frequency of bullets being shot, the area affected by the bullets, and the recharge rate of the gun. Most of the guns are your typical pistol/shotgun/etc. but there are a couple unique guns. At this point I like using the spread shot to clear out large groups of enemies and I like the stake gun for dealing ligher damage. I see Monsters and Monocles being the type of game where players are going to find two guns that they really like and they will generally focus on using those guns. Monsters and Monocles has a decent amount of guns at this point to support different types of play but I hope more gun varieties are added throughout the Early Access process.

While I hope the game adds more variety to the enemies, weapons, and objectives; I have to give the game a lot of credit for being quite polished at this point. Outside of there only being three worlds right now, most people wouldn’t even notice that Monsters and Monocles was an Early Access game without being told so. The game already has a lot of polish. I have played the game for an hour and a half and really haven’t encountered any bugs or issues where it feels like something is missing. The game is perfectly playable at this stage. The game’s includes very nice pixel artwork and the game’s music is also good. When I read that the game was going to be in Early Access for 10 months I was surprised because for a game that is that far from being finalized it is already in good shape. While it isn’t perfect yet, Monsters and Monocles has a strong foundation to build a good game around.

While I had fun with Monsters and Monocles, the biggest problem I have with the game right now is that it is the type of game that I would only want to play for a half hour to an hour at a time. I can’t really see playing the game for hours at a time. I would rather play a world or two and then come back to the game at a different time. If you love twin-stick shooters you may feel differently but at this point the game gets a little repetitive after playing the game for a half hour or so.