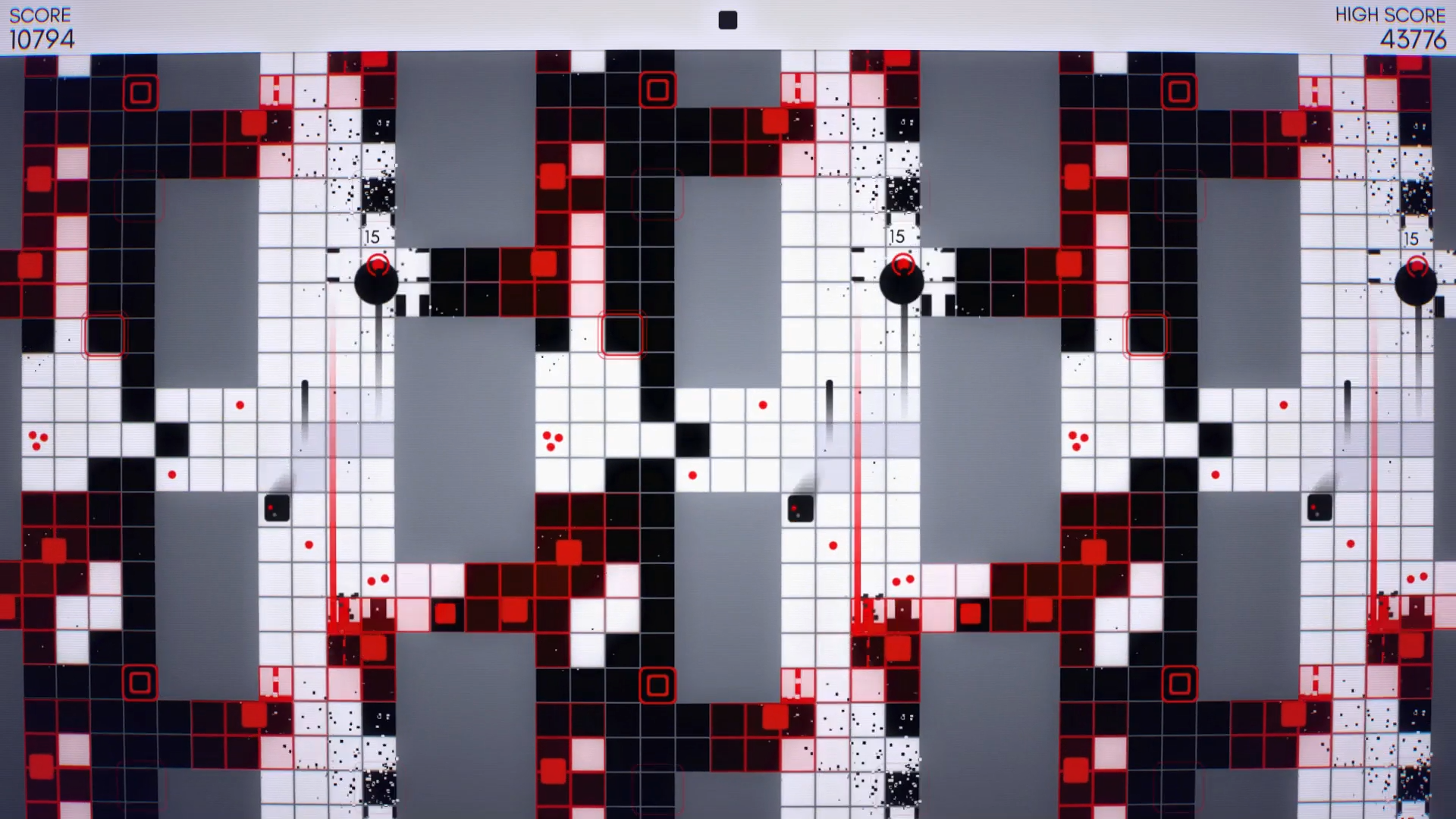 In Inversus you play on a grid based gameboard. Each tile on the gameboard is either black or white. Players can only move on grid squares that are the opposite color than their “character”. Players change the color of a grid square by shooting at it which flips the color. You want to change the color of grid squares because it will give you more areas where you can move while also hindering the areas where your opponent can move. Inversus uses this mechanic in two different modes.

The first game mode is versus mode. In versus mode players face off in 1v1 and 2v2 matches. The goal is to destroy your opponent(s). You shoot grid spaces to claim territory and trap your opponents. This makes it easier for you to shoot your opponents and destroy them. Whoever destroys their opponent first gets a point. The first player/team to get five points wins the game.

Overall I had fun with versus mode. The mode is pretty simple as you are just trying to hit your opponents. There is some skill to the mode as you try to pin your opponent so it is easier to shoot them. The mode mostly feels like a test of reflexes though since the player with the best reflexes is likely going to be the player that wins. In the games that I played I lost most of them because I didn’t have as good of reflexes as the other player. The reason that reflexes are really important is that while you can somewhat trap the other players, the easiest way to hit players is by having a good trigger finger. Most of the deaths in the game come from one player getting off a shot that the other player doesn’t see in time. There aren’t many deaths from trapping other players since it is quite easy to escape from traps.

While 1v1 is fine in versus mode, I think Inversus is the type of game that will be more enjoyable in 2v2. I think 2v2 will be better since with two players there is teamwork involved which could lead to more strategy and less reliance on good reaction times. This will still be a factor in the game but with two people working together they have a much better chance at cutting off the other team and trapping them.

The other mode in Inversus is the arcade mode. In the arcade mode one or two players try to survive for as long as possible fighting against computer controlled forces. The game continues spawning different enemies until you lose. The player/team gets a couple lives to try and score as many points as possible by destroying the enemy forces.

Of the two modes I found arcade mode to be considerably more enjoyable than the versus mode. That is probably because I usually prefer cooperative multiplayer over competitive multiplayer. I have to say that I found arcade mode to be addicting in that you want to keep playing one more game to try and improve your score. I think the reason that I liked the arcade mode is that it is so fast paced. You have to constantly shoot enemies in order to survive since as soon as you kill enemies new enemies spawn. Enemies spawn so quickly that you need to take advantage of chain reactions to survive. When you kill an enemy it will kill all of the other enemies within a certain area creating a chain reaction. It is really satisfying setting off a chain reaction that wipes out a large section of the board.

While I really liked the arcade mode there are two things that I think could have been improved. First I don’t think the game gives you a long enough warning for when new enemies spawn. This means that a lot of your deaths in the arcade mode will come from an enemy being spawned on your location. The game does show you the locations where enemies will spawn a couple seconds before they spawn but I don’t think it is enough time with your attention usually being focused on killing enemies already on the board. With just a couple more seconds warning I think you could avoid a lot of the deaths from an enemy spawning on your location.

The other problem I have with the arcade mode is that it seems like your score relies too much on creating combos. Large combos usually come from being kind of lucky so your score seems to be kind of random. My highest score came in a game where we got a really high combo for some reason. We scored more points in that game despite surviving for almost twice as long in another game. While the scoring system is decent, I wish a few tweaks would be made.

Overall I had quite a bit of fun with Inversus. It has some interesting mechanics that make for a fun multiplayer game. While I enjoyed my time with Inversus, I don’t know if the game is really worth $14.99. For $14.99 I would have liked to see some more modes or a couple additional mechanics that would have added a little more variety to the game. The game’s mechanics are fun but there isn’t a lot to them. Inversus is the type of game that is best in short doses (30 minutes or so) and is not a game that I would play for hours at a time.

Inversus is a fun little multiplayer action game with some interesting ideas. The game’s mechanics are fun especially if you play the game with friends. The arcade mode is better than the versus mode but both are fun little modes. The problem with the game is that while the main mechanics are fun, there isn’t much else to the game. This means that the game is fun to play but it really isn’t the type of game that you would play for hours at a time. This is why I don’t know if the game is worth $14.99. The game is fun and I would recommend picking it up if it sounds interesting to you but I would probably recommend waiting for a sale.