How to Play Monster Mash 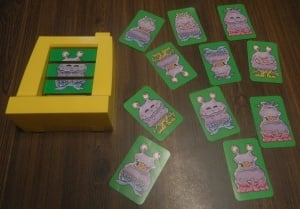 A game of Monster Mash is setup. Players must try to find the exact monster depicted on the yellow “monster-maker machine.”

“Monster Mash” is a 1987 Parker Brothers family game which involves spotting minute differences in cards to spot the one you’re supposed to find. When a button on a mechanized “monster-maker machine” is pressed, it selects three random components to make a new monster each time (top of the head, bottom of the head/body, and the bottom of the body/legs). 2-4 players then attempt to find an exact match amongst the cards scattered on the table and use their specially-coated “thwacker” hand to pick up and take the card for their pile. The first player to capture five monster cards wins. If a player “thwacks” the wrong monster, they simply put it back and everyone continues hunting for the correct monster. If the monster-maker machine selects a monster that’s already been shown (this will probably happen at least a couple times per game because the machine tends to select a lot of repeats), players can attempt to steal it by “thwacking” the card before its owner does the same. 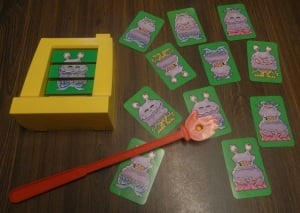 The player has found the exact monster card and “thwacked” it with his plastic hand.

My Thoughts on Monster Mash

I remember playing “Monster Mash” when I was a kid and have fond memories of the game. While I’m an adult now, I’m still pretty much a child at heart. After finding a copy of the game at a thrift store, I decided to give it a try and actually surprisingly enjoyed myself quite a bit. It’s not a great game for adults by any stretch of the imagination, but you’ll probably enjoy playing a game or two of it.

The game is mostly meant for children but that doesn’t mean it’s too easy for adults to play. The differences between the 27 different monster combinations are pretty small and it will take a good eye to find the card you’re supposed to be finding. It’s even somewhat challenging for adults (it might take you 30+ seconds to find the right card). However, the game is very simple and all kids should understand it (the box recommends ages 5 and up but some kids even younger might be able to get the concept of the game).

The main target audience for this game is obviously younger children. Even though the game is over 25 years old, most kids should get a kick out of “Monster Mash.” The monster art is pretty cool and not too scary for children. Kids should really enjoy “thwacking” the cards (they are made of a soft plastic so you shouldn’t have to worry about them hitting each other and getting hurt). The game definitely isn’t educational but your children can practice some skills like color and shape recognition and hand/eye coordination. What’s nice is unlike a lot of today’s family/children’s games, the adults might not mind playing “Monster Mash.” It’s not some roll-and-move game that only kids would enjoy. It will get boring after awhile but there is some fun to be had for adults in this game.

The components are made pretty well (though there are some age-related problems that I’ll detail in the next paragraph). This is the type of game that can get a lot of wear since you are “thwacking” cards with plastic hands. The cards will receive some wear no matter how careful you are, but their quality could have been worse. The “monster-maker machine” is mechanized not battery-operated so it should work for quite some time without having to worry about battery corrosion or parts wearing out.

There are a few problems with the game. First of all, it doesn’t really have a ton of replay value. While there is nothing about the game preventing re-playability, it just isn’t complex enough of a game to play multiple times per year. It’s more of a game that you’ll play once or twice every few years when you find it in your attic. The game is meant for children after all. I also had a few technical problems with my copy (and I seem to remember this being a problem with my original copy from childhood as well). First of all, the “monster-maker machine” tends to select a ton of repeats. The game has a smart mechanic that allows you to steal cards if a repeat comes up so this is nowhere near as irritating as it could have been (it actually adds some depth to the game). Also, the “thwacker” hands haven’t exactly held up over the last 20+ years, the cards will often fail to stick to them. Other than those minor issues, “Monster Mash” is a pretty good game for families with young children (and even adults who are children at heart might enjoy it).

Should You Buy Monster Mash?

“Monster Mash” is quite fun for a 1980’s family game. While you probably won’t want to play it that often, it is pretty fun for both adults and (especially) children. If you find it at a thrift store or rummage sale for a couple dollars, it is definitely worth picking up. The game is fairly pricy online ($30+ plus shipping on Amazon) due to its age and lack of reprints. At that price, it probably isn’t worth it.

20 Nostalgic Children's Halloween Games From The Past | Geeky Hobbies