How to Play Avalanche 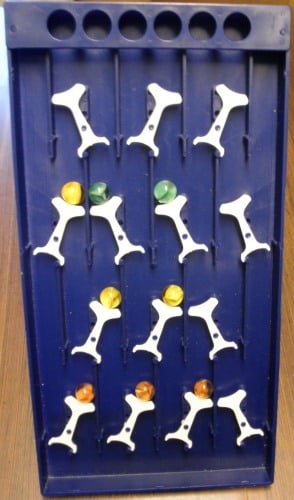 Pictured above is the gameboard of Avalanche after a couple of turns have been played.

My Thoughts on Avalanche

If I had to make a comparison for Avalanche it would probably be the game Plinko from the Price is Right. Like Plinko, you drop marbles/chips from the top and see where they end up. Unlike Plinko, Avalanche requires more strategy in deciding where to drop the marbles since you need to place marbles in the correct positions in order to maximize the number of needed marbles that will ultimately end up falling to the bottom of the gameboard. If you successfully plan out your moves it is actually quite satisfying to see a lot of marbles that you need fall to the bottom at the same time.

While there is more strategy to the game than most people would expect, unfortunately strategy only goes so far. If you don’t use any strategy when you drop the marbles you are unlikely to win unless you get lucky. Strategy will also rarely win you the game. Your success in the game is dependent on the other players and how the board is currently set up. No matter how well you strategize, there is really no way to control how the board is set up at the beginning or your turn. Another player either on purpose or just by coincidence may flood the board with one color that you do not need. The pegs/stoppers could also all be lined up in a way that you are only able to get a couple marbles on your turn. These issues become more prevalent the more times you play the game. As you become more experienced with the game, the best move on any turn becomes more obvious. If all of the players are experienced, luck begins having a greater impact on the game since both players will generally make the same moves, making fewer mistakes, and the winner is ultimately determined by who gets the lucky break.

Avalanche has several different game variations and here are my thoughts on each one.

Beginner Game: I didn’t play with the beginner game rules since it seemed way too easy. With no fear of knocking down marbles you don’t need, I believe players should be able to fill in a card in two or three turns. I would only recommend this game variation if you are playing with small children.

Standard Game: The couple games I played utilized this game variant. Adding in the requirement that you need to drop the extra marbles from your previous turn adds quite a bit of strategy to the game. You need to be careful with your marble drops since you don’t want to knock down colors you don’t need since you will just be wasting future turns getting rid of those marbles. In addition this rule allows for some additional strategy where you can fill parts of the board that you aren’t using with colors that your opponents can’t use in order to force them to get those marbles in future turns.

Expert Game 1: I did not try this variant but I believe that it would be pretty short/easy. On most turns you could probably place several marbles and only have one drop to the bottom. Therefore I don’t see this variant being that challenging and probably only lasting a couple turns. It doesn’t change the gameplay that much either in my opinion.

Expert Game 2: I did not try this variant either but it looks like it would be by far the hardest/longest variant. Depending on the number of players, you may need to acquire the majority of one color (2 and 3 player games) and not have any of another color. Also with the rule that you need to achieve the winning conditions at the end of your turn instead of during your turn, you need to get the exact right number of one color to drop on your turn. I think that would be quite challenging and maybe a little frustrating.

Overall Avalanche is a fun game. You need to put some thought into the game but it has a more relaxed feel to it. If so inclined you could just drop the marbles from the top holes and just see who ends up winning the game. Even if you are really competitive, strategy can only take you so far so there is really no reason to stress out about the strategy in the game. Avalanche is the type of game that is fun in short doses. If played for extended periods of time, I think most people would get bored of the game. I see it more as the type of game that you play a couple times every so often and then put away for a while.

The game doesn’t have an age requirement but I believe small children should be able to pick up the game pretty quickly especially if you use the beginner rules. Kids should not have much trouble learning how to play the game. Younger kids might not be great at the game though especially if they don’t think their moves out ahead of time but I can see kids still having fun playing the game.

Should You Buy Avalanche?

I think most people would enjoy Avalanche. If you are into hardcore strategy games, it might not be for you since I would consider it to be a light to moderate strategy game. Also if the concept of the game does not seem interesting to you, I don’t think the game will change your mind. Otherwise if you can find a copy of Avalanche for a reasonable price, I don’t think you could go wrong.