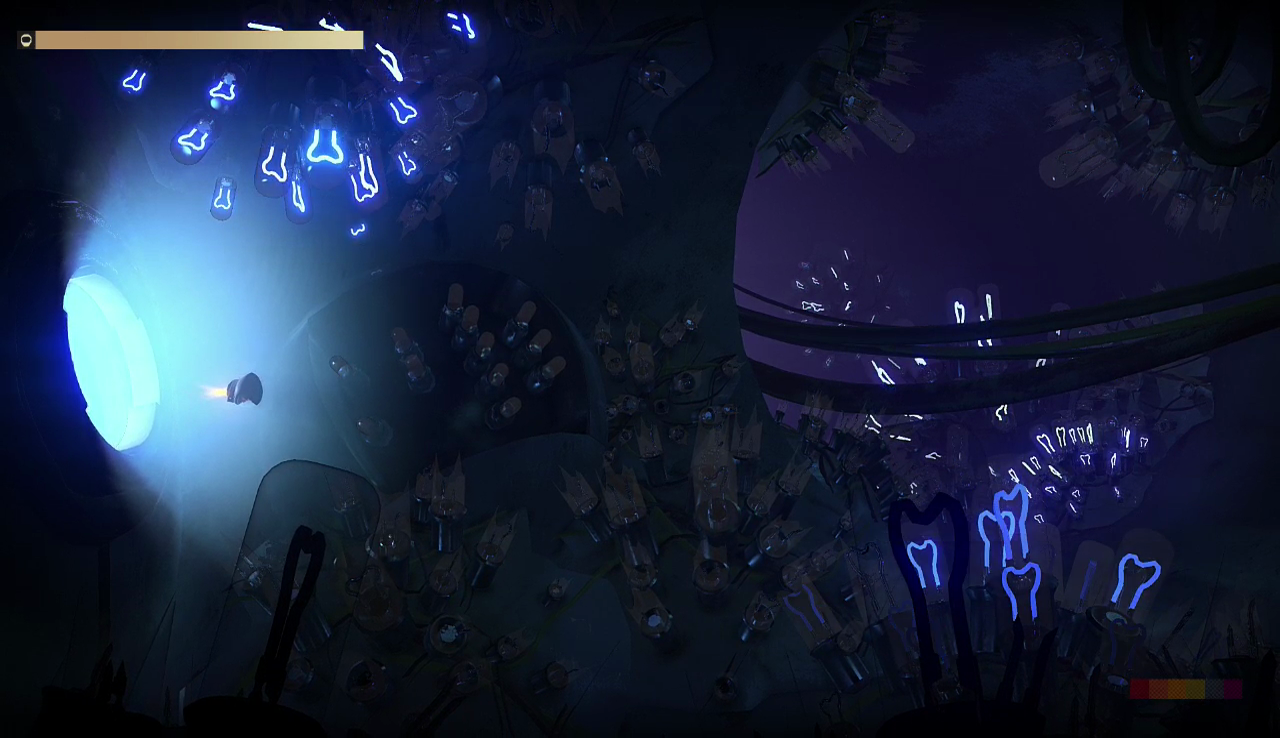 In Headlander you play as a disembodied head. You suddenly awaken to a world where humans have decided to abandon their human bodies and live in robotic bodies. Now all of the people of the world are controlled by an evil computer called Methuselah. Can Headlander save humanity from the rule of Methuselah?

I have to say that it is kind of hard to classify exactly what type of game Headlander is. The game has action elements, it has Metroidvania elements, it has some puzzle solving (very simple puzzles), and it has some elements that I really haven’t seen before in other games. The basic gameplay involves you controlling a disembodied head that is inside a helmet that can fly around the environment.

The world is filled with robots that are trying to destroy you. In order to combat the robots you can use your helmet’s vacuum to rip the head off of robots and take over the body for yourself. This allows you to control the robot’s weapons and gives you access for doors that match the robots color. After you take control of a robot you can use that robot’s weapons to destroy other robots that stand in your way. This part of the game plays like a 2D shooter. You can aim your shots and the weapon’s bullets can ricochet off walls. You can use this ability to bounce bullets off the environment to destroy hard to reach robots.

For the most part I really enjoyed Headlander’s gameplay. For some reason it is really satisfying flying around with your helmet and ripping the heads off robots so you can take over them. While I enjoyed the shooting elements of the game, I still preferred attacking enemies by ripping off their heads. The one thing I really liked about the shooting mechanic though is when the game forces you to bounce shots off the environment to disable other robots. Unfortunately too many of the combat areas get flooded with enemies so you pretty much have to just shoot as quickly as you can. I wish Headlander would have focused more on creating situations where you need to use ricochet shots in order to destroy your enemies.

While I thought Headlander’s gameplay was fun and original, the fact that there are really only two mechanics to the game makes the game start to drag a little towards the end. For about 90% of the game I really enjoyed the combat. It got a little dull though when you find out how to combat each situation and then just do the same thing over and over again for the rest of the game. I just wish there was a little more to the gameplay since once you get your strategy down it just feels like you are going through the motions until you reach the end of the game.

I kind of have mixed feelings about the game’s story and atmosphere. On the positive side I think the game’s atmosphere is fantastic. Headlander has a well developed environment that feels like it came straight from 1970s sci-fi. Double Fine did a really good job creating a unique and engaging world. Headlander’s world has charm and it is a world that you want to explore. The voice work and graphics are also really nice. You can tell that Double Fine put a lot of work into creating a fun and interesting world to explore.

The problems are with the story itself. I have to say that the story was a little disappointing. Generally I expect interesting and funny stories from Double Fine games. I just didn’t really get that from Headlander. The story is decent but it wasn’t highly original or memorable. I wanted to see how the game was going to end but it is the type of story that I will quickly forget. What I was most disappointed with was the humor. I find most Double Fine games to be quite funny but that wasn’t the case in Headlander. I only laughed a couple times during the game. The game has a funny premise and tries to be funny but I just didn’t find it to be that funny. The game just feels like it thinks it is funnier than it actually is.

While the game for the most part ran well on my computer I have to bring up that the game did end up locking up twice while I was playing it. This seemed to happen when there were too many bullets on screen at the same time. While the game saves your progress each time you enter a new room, these lockups were kind of frustrating. The most frustrating one was when the game locked up during the final phase of the final boss when I was very close to winning. This ended up forcing me to replay the entire boss fight. These issues don’t seem to be that prevalent though since it only happened twice.

As far as game length, Headlander gives you enough for your money. I beat the game in around eight hours. I ended up getting around 75% of the hidden upgrades. I didn’t really go out of my way to find upgrades but I entered every hidden entrance that I found. I would guess that it would take me around another two hours or so to find the rest of the upgrades I didn’t find. While I am not a big fan of finding hidden collectibles, I would highly recommend getting every one you run into while playing Headlander because the final boss fight is quite difficult and would be even harder if you don’t have quite a few of the upgrades.