Ever since I was a kid I have liked logic puzzles. While I wouldn’t consider myself to be great at them, I have always found it to be satisfying to solve a logic puzzle. There are a decent amount of board games that rely on logic puzzles and I have played a couple in the past including Black Stories. While I had fun with Black Stories I have been looking for a better logic game especially with how few cards Black Stories has. This brings me to today’s games MindTrap and MindTrap 2 which I decided to review together since they are basically the same game with a few small tweaks. While I knew some basics about the MindTrap series, I didn’t really know a lot about them. I had hopes though that the games could be good logic puzzle games. Unfortunately due to a lack of actual gameplay and the fact that the puzzles just aren’t that great, MindTrap and MindTrap 2 were quite disappointing.

How to Play MindTrap and MindTrap 2

Each team chooses which path each team will use. Tear off a gamesheet to be used for the game. The players need to decide whether they are going to use the shorter or longer path. Players also decide which team will start the game. 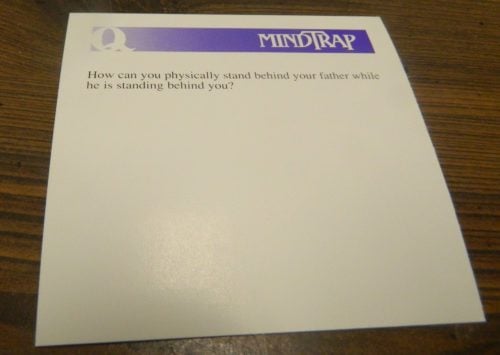 If the current team answers correctly the team can choose one of two rewards:

If the current team answers incorrectly, the rest of the players on the other team (other than the reader) have an opportunity to guess the answer. If they are correct they get to fill in one space. This team will then be the current team for the next card even if they don’t answer the question correctly.

If a team draws a card that has a diamond on it, the card is an inquiry card and it uses slightly different rules than normal cards. For these questions the current team is able to ask as many questions as they want to the reader before submitting their answer. These questions should be yes or no questions since the reader can only respond with “yes”, “no”, or “irrelevant”. If the current team is incorrect, the other team is unable to ask questions before submitting their answer. 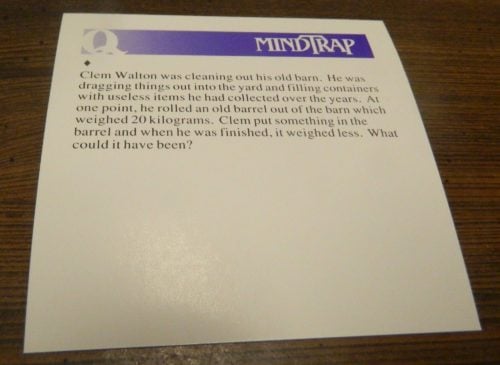 Since this is an inquiry card the current team can ask as many yes or no questions as they want before they submit their answer.

My Thoughts on MindTrap and Mindtrap 2

When I reviewed Black Stories I debated whether it should be considered a game since it was basically a set of puzzles with some light rules to add some gameplay. After playing MindTrap and MindTrap 2 I am left wondering if they should be considered games as well. Basically both games feel like they took some riddles/brain teasers and added some simple game mechanics in order to call the collection of riddles a game. The gameplay of both games revolve around guessing the correct answers. Then players need to decide whether they should take the sure thing of a space and another question or roll the die in order to try and earn more spaces. While you might be able to win the game by being lucky with the die roll, I think most games will come down to which team gets the most correct answers./

I really can’t say a whole lot about MindTrap’s gameplay because it really is barebones. None of the mechanics are really broken but I question why they even exist. I honestly think the game would have been better off just keeping track of how many questions each player got correct and that player would win the game. Adding these other mechanics to the game just feels like the designer tried to make the game feel like there was more to it than there really was. I honestly could see just eliminating the game element entirely and just reading the cards like a puzzle book trying to figure them out as a mental exercise.

I will admit that I didn’t really expect a lot from the actual gameplay of MindTrap and Mindtrap 2. I have yet to ever see one of these abstract puzzle style games actually having much as far as gameplay was concerned. What these type of games rely on are the puzzles themselves. This is the area I really had hopes for regarding these two games and where I was let down the most. The problem with the puzzles is that at least for the original MindTrap I would say all of the puzzles can be broken down into one of two categories.

The other half of the puzzles I like to refer to as the “dad joke” puzzles. I make that comparison because a lot of them have an answer that is more dumb than clever. Let me give you a couple quick examples:

So have you solved the “puzzles” yet? Well here are the answers:

I hope those examples do a good job explaining what I mean by “dad joke” riddles. Basically the key to these riddles is to try and find the trick. There really isn’t anything to figure out outside of figuring out how the writer is trying to mess with you. If you can catch the trick to the question you will be able to solve it quickly. If you can’t figure out the trick though you have no chance of getting the answer.

The one last hope I had for MindTrap and MindTrap 2 were the inquiry cards. I was intrigued by the inquiry cards since they seemed like they were going to be similar to the cards from Black Stories. Basically you can ask as many yes or no questions as you want to try and figure out what happened. I actually really liked this mechanic in Black Stories because a lot of the stories were actually really clever and you needed to ask smart questions in order to solve them. The same cannot be said for MindTrap. Most of these cards’ mysteries are straightforward to the point where you might not even need to ask any questions to solve them. What I liked about Black Stories is that you had to use a chain of questions to figure out what happened. In MindTrap and MindTrap 2 you basically have to come up with the exact right question to get any real information for the answer.

Another problem with MindTrap and MindTrap 2 is there is a lot of sitting around waiting for the other team. If you are only playing with two players, the reader basically can’t do anything while they wait for the other player to answer. With larger teams the players other than the reader can try to solve the mystery but they are still forced to wait for the other team. I think the game might have been better if both teams could have worked on the puzzles at the same time (outside of the reader of course) and whichever team could solve it first would receive the reward. The series seemed to somewhat go in this direction as MindTrap 2 has the team challenges which I think were good additions. There is still quite a bit of sitting around in MindTrap 2 though.

Speaking of the differences between MindTrap and MindTrap 2 I have to say that MindTrap 2 is clearly the better game. While I will talk about the differences in component quality shortly, it just feels like a lot more effort was put into MindTrap 2. I think this comes from the fact that MindTrap 2 actually has several different types of cards. While some people are probably not going to like the Shape It or Stick It questions, I think they bring a nice change of pace to the game. I also like that they are team challenges so no one has to wait around for the other team. In addition to the two team challenges, I also kind of liked the Picture It questions because it is kind of fun trying to guess what an object is using only a really zoomed in picture.

Along with having more variety in the types of questions, I actually think the quality of the questions are also better in MindTrap 2. I will admit that MindTrap 2 still has plenty of “dad joke” riddles but there are more questions that actually rely on some actual thought to come up with the solution. I would actually say that some of the questions are even pretty clever. This still doesn’t fix all of the problems with the game but it does make it more enjoyable than the original game.

One thing that I have to compliment both games on is the fact that both come with a lot of cards. MindTrap seems to have around 504 cards while MindTrap 2 has 406 cards. Compared to Black Stories 50 cards you can’t complain about the quantity of cards included with either game. There is still a potential replay value issue with the game though. Once you have played through all of the cards, players are likely going to remember the answers to quite a few of the cards. I don’t see either game being as enjoyable the second time through the cards.

Should You Buy MindTrap or MindTrap 2?

If you would like to purchase MindTrap or MindTrap 2 you can find them online: MindTrap on Amazon