To be the first player to get all of their pegs to the bottom row.

Each player puts one of their pegs in the top space of each section of their side of the game board. The players choose who will start the game.

The game begins with the ball being placed on one of the flippers. A player presses down on the flipper and releases it in order to flip the ball into the air. Once released the ball will fly through the air and will land on another flipper. That player needs to then shoot the ball in order to prevent it from falling into the hole in the flipper. Players can press down and release their flippers at any time and don’t have to wait for the ball to stop moving. 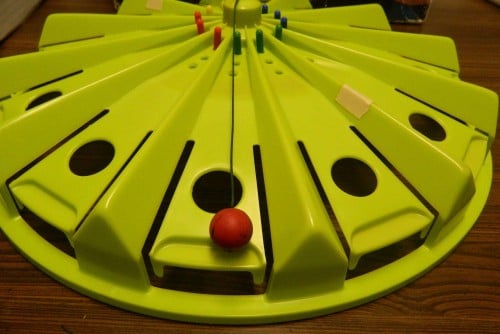 The ball has been setup for the next round. In order to shoot the ball the player has to press down and release the button. 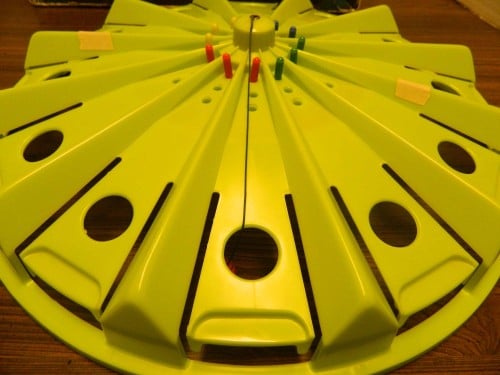 A player has scored. The player who shot the ball forcing the ball to fall through the hole scores a point unless they shot the ball into their own hole.

The ball is removed from the hole that it fell through and the ball is shot from the same flipper to start the next round.

When one player has moved all of their pegs into the bottom row, that player wins the game.

The Ideal Company was mostly known for making action family board games. Most of these games featured a simple mechanical component that the gameplay was based around. Today we are looking at the 1970 Ideal game Up N’ Over. Just looking at the box, Up N’ Over looks a little too simplistic to be anything special. All you do is flick the ball back and forth hoping to shoot the ball through one of the holes in the game board. While it is far from the best game ever made, I actually had quite a bit more fun with Up N’ Over than I was expecting.

When you first look at Up N’ Over it seems like a really simple family game. How much fun could you have just flicking a ball back and forth? I was actually surprised by how much fun I had with the game. Up N’ Over works great as a filler game. Each game takes around 10-15 minutes to play. It takes around a minute to learn and about the same amount of time to set up. Pretty much anyone could play the game and I even think children under the age of six could probably play the game.

It’s kind of hard to explain why the game is fun but it is just one of those games that you just have fun with. The game is just mindless fun that you don’t have to put a lot of thought into. I give the game credit for working pretty well for two to four players. I played the game in a two and four player setting and the game actually plays kind of different in the two situations. In the four player game fast reflexes seem to be best since if you hit the ball as soon as it lands on your side of the board it is easier to score on your opponents. The two player game is considerably harder since you control so many more flippers which makes it hard to hit the ball quickly since you need to react quickly in order to get you finger on the right flipper.

While I had more fun with the game than I was expecting I have to say that the game does have some issues.

Another issue with the game is that sometimes it is really hard to tell which player was the player who shot the ball through the hole. When the ball is bouncing back and forth it is really hard to sometimes see where a ball bounced from. Sometimes the ball is moving so quickly that you need to just guess who was the player who actually made the shot. Adding in the fact that a player might shoot the ball into their own hole and it becomes even harder to know for sure who should score. The scoring system is pretty imprecise to the point where the game is probably more fun to play without keeping score.

The game also lacks a way to really aim your shots. The only thing you can really affect in the game is the amount of power that you put into any particular shot. If you play the game enough you might somehow find a way to somewhat aim your shot but in the time that I played the game none of the players could figure out a way to aim their shot.  This leads to a problem where two of the players generally just shoot the ball back and forth. Since you really can’t aim the ball, the ball usually just goes back and forth for quite some time which means the other players have to sit there waiting for the other players to actually shoot the ball towards one of them.

While the game board looks kind of cheap when you first look at it, the game is surprisingly sturdy. For a game that is over forty years old, my copy of the game was still in pretty good condition. The flippers at first seem kind of flimsy and you would think that they would break off pretty quickly but they are a lot more sturdy than they look. If one of the flippers breaks off though the game is pretty much broken since I don’t think there is any way you would be able to fix a flipper if it snapped off.

The other issue I had with the components was with the pegs. I don’t know why the designers decided to have the pegs go on the game board itself. This causes two problems. First the pegs come out of their hole quite a bit and have to be put back. If you don’t remember which space they were in you might end up having to guess. The pegs also sometimes get in the way. At least once in the game the ball actually got stuck in the pegs and had to be picked up in order for the game to continue.

Up N’ Over is more fun than I was expecting but it is not going to be for everyone. The game is really simple which makes it a good filler game especially for people that don’t play a lot of board games. It’s not the type of game that you would want to play for long stretches of time though. I would play it occasionally for maybe 30 minutes and then put it away for quite some time. The game is far from complex and pretty much just comes down to luck.