In Don’t Drop Mama the object of the game is obviously not to drop Mama.

To begin the game Mama is placed on the game base. The first player then rolls the dice and performs one of the following actions based on what was rolled on the dice. 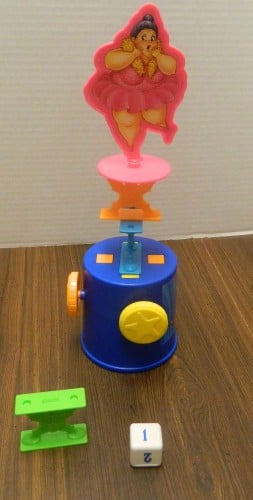 In order to add the green piece to the tower, the current player must first use one of the cranks to lift up the pieces already in the tower. Once the other pieces have been lifted high enough, the green piece made be slid into position.

Whoever makes Mama fall during their turn ends up losing the round while the other players win the round.

The 1980’s and early 1990’s were a time period where many board game companies decided to try some new things with regards to children’s games. From unique themes to unique gameplay experiences this time period lead to quite a few unique board games. Some of these games were successful while other failed never to be heard from again. I have played quite a few of these games over the years. While most of them are pretty original, they don’t tend to hold up very well for adults.

Don’t Drop Mama is one of these unique 1990’s children’s game. The game must not have done particularly well since I had never heard of it before I recently found it at a thrift store. Due to its’ unique concept I had to give Don’t Drop Mama a chance. After playing the game I can see why it didn’t sell particularly well even though it is actually a pretty unique game.

I would classify Don’t Drop Mama as a children’s dexterity game. The game is kind of like Jenga and other tower building games (our review of Careful The Toppling Tower Game) where you need to add to a tower while trying not to tip it over. The genre itself is not very original as many tower building game have been made over the years. What is unique about the game is the mechanic of how you build the tower.

In Don’t Drop Mama you use the starting base. The starting base has two cranks on it which when turned lifts up the pieces already played on the gameboard like a car jack. Once the pieces have been lifted into the air you either add or remove a piece from the bottom.To end your turn you then slowly lower the other pieces back down in order to complete the tower. All this needs to be done carefully so you don’t knock down the tower.

This lifting mechanic is my favorite part of Don’t Drop Mama. This mechanic is an original and unique experience. I found it to be a fun change to the traditional tower building game. It is hard to explain but it is satisfying when you complete all of the steps to successfully add a new piece to the bottom of the tower. The mechanic is also easy enough that children shouldn’t have any trouble understanding it. While not particularly strategic I actually had fun playing Don’t Drop Mama.

I also have to complement the game on is the quality of the components. I was really surprised with how well the cranks worked with raising the pieces. I thought it would be pretty jerky which would have made it very easy to knock over the tower. The process is smooth though so if you knock over the tower it is likely to be your own fault. The other game components are also nice since they are made of pretty thick plastic and should be durable.

Don’t Drop Mama is fun in short bursts, but the game does get boring pretty quickly. Kids will probably enjoy the game for longer stretches than adults but it is not the type of game you play for long stretches. It is the type of game that you may play for 10-15 minutes at a time and then pack away for a later date.

One of the reasons for this problem is that each round doesn’t last very long (a couple minutes at max). Rounds end so quickly because you can’t build a tall tower before Mama tips over. You can generally expect to get a tower to four or five levels high before it falls to the ground. This may be in part due to not playing on a fully level playing surface so your experience may differ if you play on a truly level surface. What I find kind of funny is that the instructions actually has rules on what you are supposed to do once you get all twelve pieces in the tower. Unless having a totally level surface is that important, I find it to be very unlikely that any group would ever be able to get all twelve pieces in the tower.

Due to the tower never getting very tall, luck becomes a bigger factor in your success than it should have. As the tower gets taller it becomes harder to place additional pieces. Therefore turn order is very important. Players that get to play earlier are in a better position than those players that have to play last. In addition the die roll has a major impact. If you roll a 0 or a wild you get to skip your turn and the tower will likely fall before your next turn. If you end up rolling a 2 you are likely going to knock over the tower unless it was one of the first rolls of the round. One of the alternative rules for the game eliminates the die rolling and just makes everyone add one piece to the tower. If you don’t like the die rolling aspect I would highly recommend using this alternate rule.

The final issue I had with the game is the scoring system. If only two people are playing it is fine since one person will win and one will lose each round. When there are more than two players, one player loses while the rest win. With this scoring system I feel that there will be a lot of ties unless a lot of rounds are played especially if one player struggles and loses most of the round. I actually think a better scoring system would have been to eliminate the player that made the tower drop.

Overall Don’t Drop Mama is a very interesting children’s board game. The game’s mechanics work pretty well and most players should get some enjoyment out of the game. The biggest problem with the game though is that it kind of gets boring pretty quickly. It is not a game that you would play for long stretches at a time. Expect to play it for around 10-15 minutes before putting it back into storage. The game could also have made it a little easier to make taller towers and relied a little less on luck.