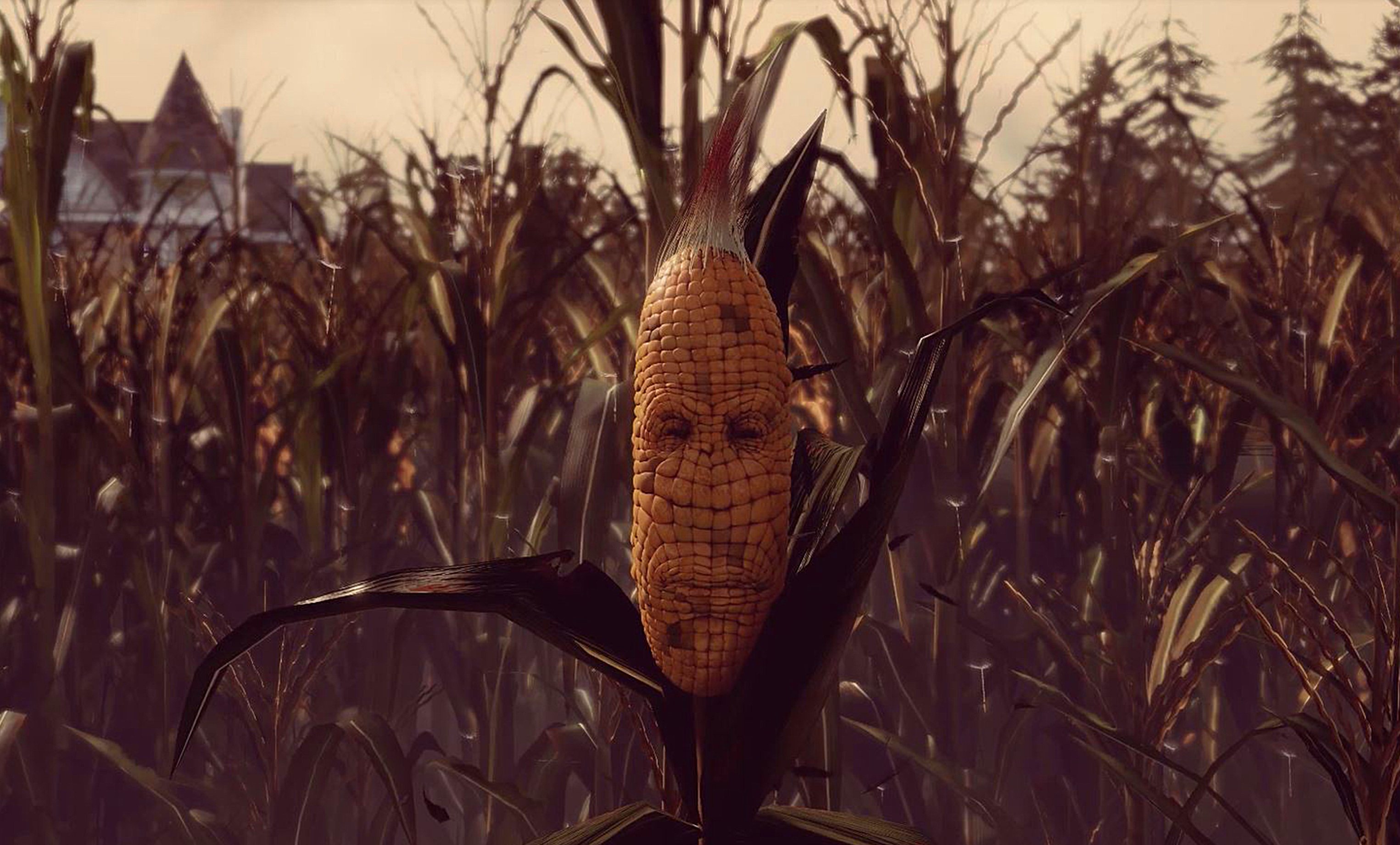 I am not going to mince words, Maize is one of if not the strangest video game that I have ever played. Maize basically takes place on an abandoned farm/research facility that is overrun by sentient corn. That was not a typo. The game features walking and talking corn. While some people might think a video game about sentient corn would be really stupid, I am here to tell you that I was pleasantly surprised by Maize.

While I don’t really like the term, I would classify Maize as a walking simulator. I have never really liked the term walking simulator because it feels like an insult against games that focus more on the story than the gameplay. The term does describe Maize pretty well though since for the most part you walk around the environment exploring what happened at a government facility that decided it was a good idea to create sentient corn. If you are interested in action packed gameplay, Maize is not going to be the game for you. The gameplay in Maize basically comes down to walking around picking up items and placing them in other areas.

Picking up items and placing them elsewhere adds a light puzzle mechanic to the game. I want to really emphasize the “light” part of that statement since I can’t see the puzzles really challenging anyone. If you have ever played a video game before I can’t imagine you really getting stuck in the game. There are literally only a couple places where you can fail/die and in only one instance did I fail due to getting lost in maze area that was timed. While some of the puzzles utilize some strange logic, they are so straightforward that they aren’t much of a challenge to figure out.

This simplicity is the biggest problem that I had with Maize. If you want a challenge you are not going to get it from Maize. As a matter of fact Maize pretty much grabs you by the arm and guides you through the entire adventure. Instead of letting you explore the whole farm/facility to figure out a solution, the game blocks off a lot of the paths essentially telling you which area of the farm that you have to explore. The game seems like it was designed in this way since there are several jokes in the game making fun of how the game pretty much tells you what to do. Even if the game didn’t block off paths, the game would still be very easy since the puzzle design is just so straightforward. If you are looking for a challenge the gameplay in Maize is going to disappoint you.

I am not going to really discuss much of the story because that would ruin the game but basically the story is about the creation of sentient corn and the completely messed up government research project that thought that was a good idea. If you love wacky stories you will probably love Maize but if you like more “normal” stories Maize is not going to be for you.

While the complete randomness can be a little hard to follow at a couple points in the game, that complete randomness makes the game really funny. Maize is an acquired taste though so if you don’t think wackiness is funny, you probably won’t find Maize to be very funny. I will say though that I laughed out loud quite a bit during the game. I think the game’s writers really deserve credit because while the game can become completely random at times, the story still makes sense (for the most part).

Some of the funniest parts of Maize are things that you can easily miss. Every item you pick up in the game has a description from the point of view of your character (who is not very bright) and these are usually quite funny. I would highly recommend that everyone check out all of the item descriptions since they are some of the best parts of the game. It is kind of disappointing though that some of the descriptions give clues on how to use the items which makes the game even easier since you will want to read them even if you don’t want the clues. These clues can basically tell you exactly what to do with an item.

While this is not a perfect comparison, I would compare Maize’s story to The Stanley Parable. While the game’s stories are quite different (there is no narrator to fight against), the complete randomness of the game’s humor is kind of similar. Maize is not like Gone Home where it takes its’ story seriously. The game knows that it is ridiculous and it fully embraces that to its’ own benefit. While I think Stanley Parable is the better game, people who enjoyed The Stanley Parable will probably also enjoy Maize.

One thing that a lot of walking simulators share in common is that they generally aren’t long experiences. While Maize is shorter than a lot of games, it was longer than I was expecting. I ended up playing for four to five hours. I tried to explore every corner and find every secret/collectible so if you just rush through the story I bet you could finish the game in two to three hours. Like most story driven games, I don’t see a lot of replay value in Maize. I basically found almost all of the collectibles so there really isn’t any need to go back to the game. Some people may want to replay the game but I don’t see a lot of people in that group.

On the technical side Maize works well for the most part. The graphics are quite good for an indie game. There really aren’t any control issues which is to be expected since you just walk around and click on things. The only issue I had on the technical side is that the game has pretty long loading times. I attribute this to two things. While I have a pretty powerful computer it is not a top of the line computer so loading times should be better on more powerful computers. I think the bigger culprit though is the fact that the game seems to load up large portions of the game at a time. Once the game loaded I barely noticed any loading times during the rest of the game. While the loading times kind of suck at first, once you are through them you don’t really have to worry about them anymore.

Overall I had a lot of fun with Maize but I will say that the game is not going to be for everyone. If you care more about gameplay than story or don’t particularly care for walking simulators, you are not going to like Maize. Also if you don’t like stories that rely on wackiness/randomness, Maize also probably won’t be for you. If you enjoy a good story that is really weird/strange though I think you will love Maize. Maize is one of weirdest games that I have ever played and I had a blast with it.